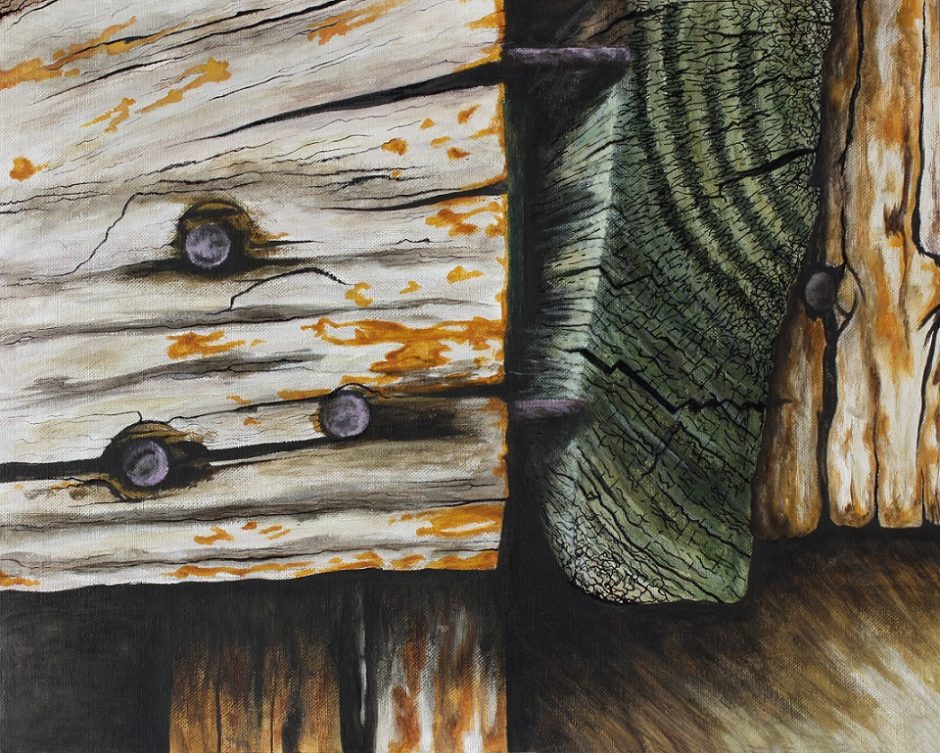 When the distance between the bottom of the steps and the edge of her bed was too far for her to travel, I made the journey happily and often.

After bounding up the carpeted stairs on all fours and pushing her door open, I found my mother propped up on a throne of pillows. On the nightstand, her bedside reading included Janet Evanovich and the instructions plastered on prescription pill bottles.

“Hi baby,” she said, and patted the space next to her as an invitation. I gently crawled onto the queen size mattress and laid my head in the welcoming spot between her arm and breast.

The soft blue light from the TV in the corner of the room cast a halo over the mound of clothes that lived at the foot of the bed.

“Can you see?” she whispered and kissed my hairline.

I couldn’t. But I didn’t care what the newscaster had to say, I was content with being lulled to sleep by the rhythmic thud of her heart and the thought that all problems have solutions.

We would knit together. Our elbows periodically touched as we sat side by side on the bed and worked on our respective projects. While she was a master of the craft, I labored over a scarf that was riddled with holes from dropped stitches, doomed to never grow past the length of my forearm.

“Here Honey,” she said as she pried the thick beginners needles from my frustrated fingers.

“It might be easier to start over. Why don’t we just use this one as a dust rag?”

She commissioned another scarf, recast both my yarn and my confidence, and helped me begin the whole process over again.

We had many, many homemade dust rags.

One night, when the summer heat ignited a particularly bad storm, my siblings and I filled the space between my parents as they lay on either side of the bed. We could feel each other shudder as the rain assaulted our house. The wind raged so severely that it sounded as if God was angrily pressing his palms against the bedroom window, pushing with all his might.

“We’ll go to downstairs if it gets too bad?” I asked, needing to hear her promise.

We sat facing each other, criss cross applesauce. The mountain of clothes between us eroded as my mother picked out pants, shirts, and underwear, folded them and placed each into whoever’s designated pile they belonged. My job was to match the socks, I earned a dime for each union I made. My dad often went to work with mismatched socks because to me, every shade of brown was the same shade of brown. He later told me that he didn’t mind, that he would think of us whenever he looked at his feet.

Sometimes Remission came along and stirred things up. It made my mother’s hair grow out in salt and pepper strands, but never with enough energy to form a proper curl. As time went on my family came to realize that my mother’s good health was only loaned to us, never owned. Remission would leave as quickly as it came, giving no indication if it was ever coming back.

I once walked into my parents room while my mother was sobbing into my father’s shoulder. Something about feeling useless, feeling like a bad mom because she couldn’t be more involved. I silently retreated and locked myself in my room, trying to hide from the guilt that lived in our house like an unwelcome relative.

I wanted my mom to pick me up from school, drive us around while listening to her favorite Carole King CD. I wanted her to be waiting for me when I came out of the Orthodontist’s office, look up from her Reader’s Digest and ask, “all done?” like she always used to. I wanted to hold her hand at mass during the Our Father. I wanted her to make us dinner again, even if it was just reheating one of the casseroles Mrs. King kept bringing over. I wanted her to sit next to me on the living room couch in the morning and drink the coffee I made her (two Splendas, a mound of powdered creamer, stir until it’s all dissolved.) I wanted her to hand me the comics section of the newspaper and explain the jokes to me. I wanted to hear her knees creak along with the wooden bannister as she descended step by step.

I wanted her to come downstairs.

But instead, night after night I settled for my head against her breast, listening to her heart beat and watching her chest rise and fall with every breath. Up and down. Up and down.

Anna May Wong Stars in a Silent Film