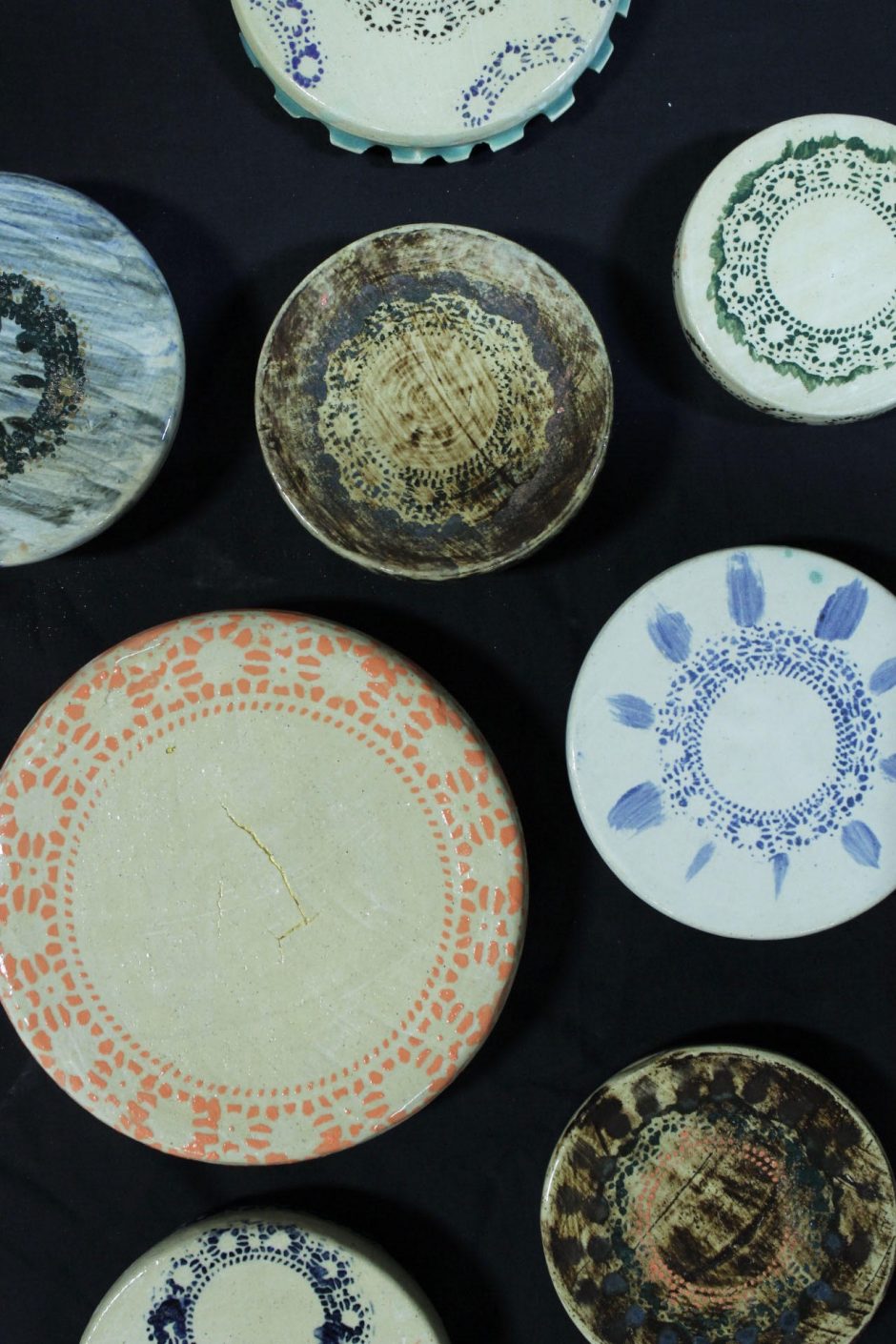 As an adult, Desmond P. Merina will claim that Sunday, October 6, 1991 is the most significant day of his life because it is the day he causes a catastrophic bouncy castle collapse at the Sierra County Fair in Truth or Consequences, New Mexico. He is seven years old, and his twin sister Sara is pinning him to the floor of a Loco Fun Jumps Deluxe Inflatable Play Structure. Her forearm presses against the back of his neck and her other hand shoves his face into the gritty, lacquered plastic. All he can see is the faded gingham of her capris and the cubes of violent, red sunlight filtering through the mesh castle windows.

“Take it back!” shouts Sara.

“I’m sorry! I take it back!” The pressurized air forces Desmond’s words back into his mouth. They taste like salt and sand and industrial paint. Sara claws her fingernails into his hair and Desmond flails, earth-quaking as the other children’s feet sink into the castle and break free again. Sara presses him down more intently.

“You take what back?” she snaps.

This is when it happens. As he opens his mouth to reply, Desmond’s left lateral incisor slips into an imperfection in the seam connecting two air pockets. And there you have it, there it is, because Desmond knows in that moment that he is the sole barrier between the carefully recirculated air which runs through this bouncy castle, and the expansive, unpredictable world. Later, he will not remember what he said to make Sara pin him to the bouncy castle floor, or where his father went after paying admission. But he will always remember the hazy atmosphere of the fair fading until he can only hear the music of the structure itself, the gentle heartbeat of the synthetic canvas and the crush of dry autumnal grass underneath, the air pressure sparking off the plastic and through his fingertips.

Sara shoves his head further into the bouncy castle floor and yanks backward, and his tooth rips a foot-long gash through the seams before separating cleanly from his skull. The sudden loss of integrity causes a supernova: the roof crumples, the pillars pike inward, and all ten children inside are suspended for a moment in a sea of mesh and plastic and burning autumn heat. Desmond, still traveling on the trajectory Sara set, skitters between the candygloss slices of his castle and tangles in a cocoon of safety windows.

Later, Desmond will edit this memory. He will flake away sound and leave only this: rough black window fibers, frayed and bisecting his vision, the sideways sky—cloudless, cornflower, refracted white by the midday sun—and in the distance, the overexposed Martian red of the mesas holding Truth or Consequences away from eternity, and everything is beautiful.

Desmond is the first child to be removed from the wreckage. A rancher with glinting silver scissors snips him out as if untacking newspaper from a birthday present. He plucks Desmond up and stands him in a pond of dead brush and window. Desmond curls his toes over the pieces. His hair is saturated with dust and his socks have turned the color of old photographs. He knows, somehow, that this moment is important.

The rancher slips his scissors into a leather gun holster. “Okay, son?”

“I broke it,” Desmond announces. The rancher is not listening. He ruffles Desmond’s hair and goes to help excavate Sara and the other children.

Desmond does not turn to see the fairgoers and paramedics lifting sheets of shining, dripping plastic from the other children. He walks away from the sirens and crying, through the maze of abandoned booths, and finds the mechanical bull pen. He kneels in the dust and crosses his arms over the ropes. The bull’s eyes are penny-flat, and its saddle is worn in patches to a gentle, threaded tan. It sizzles in the dry heat, lopsided on its spring. Desmond remembers, and will always remember, how he once rode a mechanical bull while sitting on his father’s lap. The bull was on its lowest speed and rocked loosely in a rare breeze. The light smelled of sagebrush and cotton.

Earlier in the day, Desmond’s father had parked his taupe Chevette in a red-brushed field and taken his children to the ticket booth at the edge of the fair. He was wearing his army surplus jacket despite the autumn heat, and a blank-eyed expression Desmond did not recognize. He paid for two tickets while his children listed everything they wished to experience: the pie-eating contest, the mechanical bull, the horse races and rabbit showmanship awards, and of course, the shining plasticine specter of the bouncy castle.

“Look, Dad, it’s over there! Wow, look how huge it is! I bet it’s as big as the ones in the circus! Can we play in it?” Desmond pointed, pulling on the soft denim of his father’s pocket. The castle flashed bright against the sandy desert.

“What? Yeah, sure, whatever you want. Here.” He handed each of his children a crisp red Admit One ticket and steered them into a thicket of prickly pear. He scraped up a cloud of dust with the toe of his boots, then pulled a crinkled ten-dollar bill from his jacket and pressed it into Desmond’s hand, squeezing the money and the ticket and their palms together. “Uh, don’t spend it all at once.

Desmond nodded slowly. The bill was a delicate shade of tumbleweed, soft on the edges like overused playing cards. It was more money than he had ever owned before.

“And share with your sister, Desmond.” Their father kneeled, wrapping his hands around the sparrow curves of his son’s shoulder. “You hear me? Be good to her.”

This felt gravitational in a way Desmond could not articulate, and that he will not be able to articulate for a long time. “I will,” he said, and the hands fell away.

“I need to get something from the car. Just go on in.”

And they did. Sara lost the pie eating contest and ended up with blackberry juice seeping a latticework into her shirt, and Desmond worried about where to spend his money: cotton candy, or cornhole, or sweet empanadas. By the time they reached the Loco Fun Jumps Deluxe Inflatable Play Structure, they had forgotten to care where he was or what he was doing.

Desmond wishes he was with his father now. He also wants to see Sara, and his tennis shoes, and his ten dollars folded into the toe of the right one. He had been too indecisive to spend any of it, which he regrets now that the money seems lost. The idea of circling back to the collapsed castle crosses his mind, but Desmond knows it would be too hectic to locate any of the things he wants, so instead, he folds against a wooden stake and traces pictures of bulls into the vermillion dust.

Sara is the last child to be removed from the wreckage. She emerges from the innermost sheets of plastic after the other children have been whisked away by their parents, and the remaining fairgoers clap when the paramedics ruffle her hair and announce every child accounted for, unharmed. She goes out alone to find Desmond. When she reaches the mechanical bull pen, he is sitting alone with three cones of cotton candy, pushing clouds of sugar through the new space in his teeth. He is still somewhat concerned that he may be apprehended for depressurizing the bouncy castle, and he has not found his tennis shoes, or the ten dollars in the toe of the right one, but the lady at the cotton candy machine had given him the cones free—for being so brave.

Sara slips down a wooden stake, and Desmond offers her a cotton candy, which she plucks from his grasp. Their father told him to be good to her. The fairgrounds are emptied of everything except the news caravans, and the sky is the color of sanded roses. The flossy dessert is pale against Sara’s flushed skin, and her hair is damp from the close, humid air between the bouncy castle folds. As adults, on the rare occasion that Sara does agree to see Desmond, he will always ask her what they were fighting about when he destroyed the bouncy castle, but she forgot somewhere under the stretched of deflated plastic. Desmond drops the last swath of cotton candy onto his tongue, and slides closer to his sister, aware that everything has changed but not willing to accept it—he never will be.

“I broke the bouncy castle. With my tooth. And it came out, too.”

“I’m gonna save this last cotton candy for Dad.”

“Sure,” Sara replies, twirling hers in hand, and they sit together in front of the mechanical bull, waiting, waiting, as twilight saturates the mesas and closes Desmond in this moment forever.