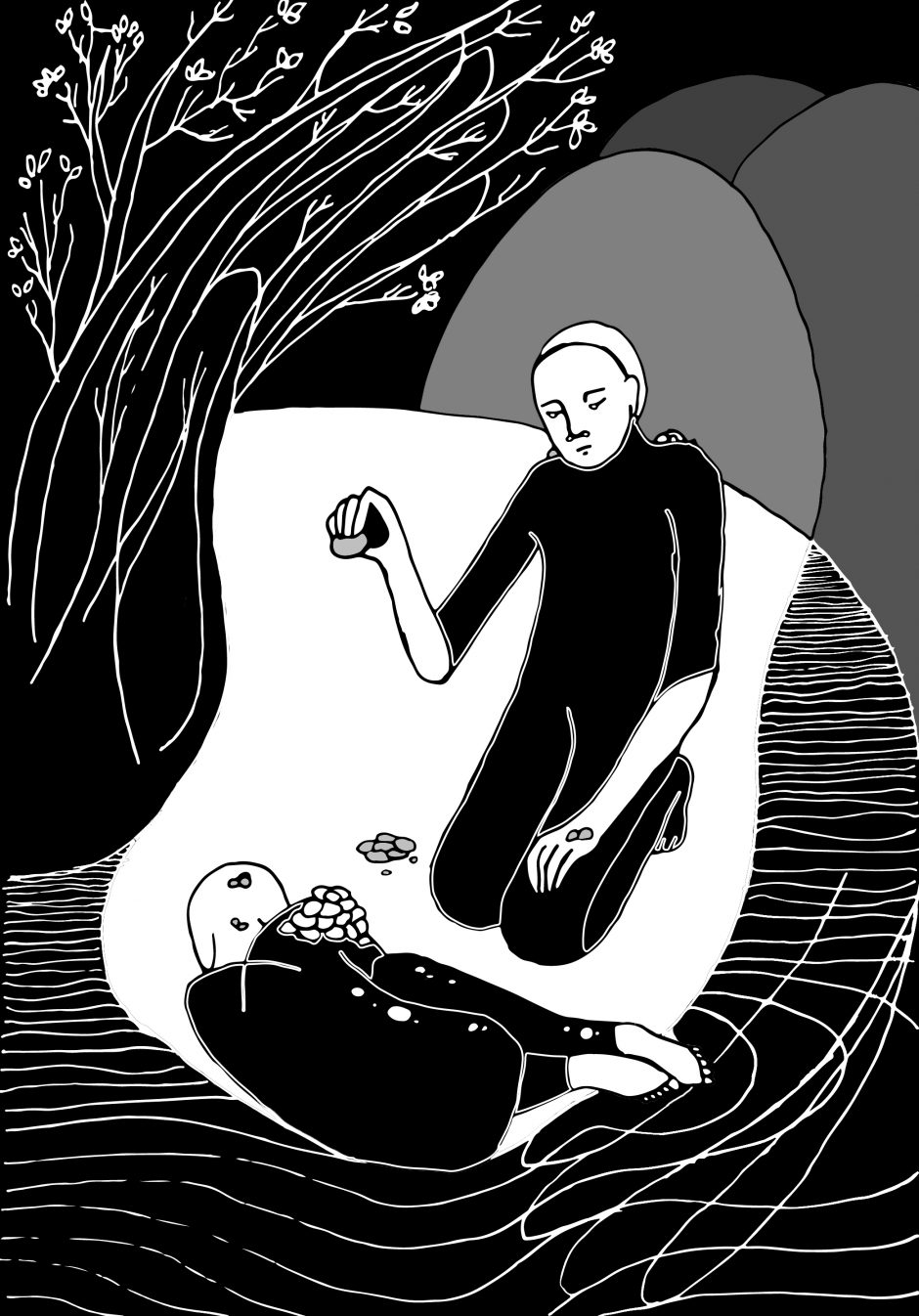 The vaulted ceiling of early morning and hemlock canopy float around you like a vulture. I can see your fjord-blue eyes from this bird’s eye view. You look up at me- a splayed and pinned Vitruvian man encircled in heavy sleep. You turn your head on a bed of peanut brittle leaves snapping in your ears. Get up, Matt.

You are in the woods because you tried to die, again. You don’t remember how you got there but there is a handle of vodka that you emptied spun away from you. Some dirty brown dope, too. Throat rusty and raw steaming with chemical waste, you shake off the pieces of floor clinging to your back and legs and shoe laces. Your head is thick and splitting at the middle where your brow bone bulges. Your pork-chop pink petal lips, lovely and improbable in their flat face and sharp angles, pull and twitch in fleshy telegraph rhythms I can’t remember anymore while you gather yourself.

“I don’t mean to scare you, Sarah, but one day you might just get a call from someone saying I’m in a ditch somewhere, inconsolably muttering your name over and over. “

I am thinking about you in handcuffs. A couple years before I really knew you. Your dad’s shoulders filling out that orange jumper you’re in and curling forward at the corners. The imitation pine-wood table you are shackled to was probably the same imitation cork beige as the one my keyboard is resting on. Your dad’s eyes are an even deeper blue than yours. His are usually cut like razors set in dry ice but their warmed and bleeding saltwater. His massive frame rapidly losing its emotionless turgor- an ocean flowing out of him.

“Please, your honor, my son’s tried to kill himself three times this year. He just needs help. I don’t know what to do anymore.”

Other than that time you two went fishing and he didn’t mean to kill that fish, this is the only time you see him cry. Big, bad, Greg. He’s built like a wolf and he’s in the business of protecting foreign dignitaries. I wonder when he kissed you and held you last. Probably not since you were a baby, that fleshy soft formlessness that he could still relate to. Before you were socialized and began to confuse him, moving with too much agility for him to lock onto you. Cleaning his guns and calculating the chess of his life was much simpler. Point A to B. Black backpack full of tactical gear and clear acetate voices in his ear driving a bomb-proof Cadillac but Greg can’t protect his baby from his death drive.

He kisses my cheek and hugs me and even though I am looking at your coffin over his shoulder I can feel your yearning. He used to choke on his tenderness like it was wrenched out of him, like his heart was gagging. He would cough when he said hello to me softly, trying not to scare me. Our first hug but he is not opening the door for me so I can bring you waffles with blueberries and watch you iron and starch your shirt. I miss you so much.

My mom is sitting at my brother’s desk sobbing. I discovered her here in my brother’s emptied room- wiping her snot and tears with the back of her hand while she rhythmically crumples and un-crumples one of my brother’s shirts. It is a time at night where we are both wearing only oversized t-shirts. I stand next to her and hold her. We look like two adolescent girls at a sleepover. I wonder if my mom and imo held each other like this when they got the news.

My brother is the same age as my mom’s little brother when he died. Earlier that day we moved my brother into his dorm. My mom didn’t shed a single tear or coo sad I-love-you’s. She doted on him with typical Korean excess instead. Fiddling with this and that until the care became unbearable as it mutated, like it always did, into a pillow pressed firmly across your face.

I finally understand the intensity of her overbearing and anxious parenting. It is inextricably tangled into the whole of human existence. Everyone leaves. My best friend and ex-lover, barely a man, gets locked in a closed casket. Uncle Gab, carrying the entirety of the American dream on his shoulders, throbbing with youthful promise falls asleep on his way home. Young and old. Far and familiar. Death is indiscriminate. Your love and care is completely irrelevant, but you can’t help but indulge yourself. You cling to their ankles, but nothing tethers anyone here. That shared blood spills out all over a car seat wrapped around an 18-wheeler just like everyone else’s.

And then my family huddled closer and folded tighter. Korean immigrants are notoriously insular to begin with but their world shrunk to a whisper and my grandma laid in her yoh for three months straight- a dessicated carapace of grief.

They packed away Gab into a box and then every Earthly artifact into another. I have only seen one picture of him which I short-sightedly destroyed. My seven year old self, still barely relating to human beings, was more interested in the dog in the picture than a stranger with my flesh and blood. I cut out his dog and put it in a locket. His name was Buggeug and he’s spraying snow everywhere like a purposeful homage to his namesake. An all-white hulking mass of a German Shepherd. Big ears, brown nose and Gab’s pride and joy. Gab’s beaming and my mom is opening her mouth loud, beaming with just as much light.

I keep picturing him in the winter time even though he died in the summer of his last year at Cornell. He is standing in a phone booth wearing a walnut-brown distressed leather jacket with a sheep-skin collar and big tortoise shell glasses. He’s got my kind of thick straight-straight black hair sweeping around his head. I can see his breath. He’s on the side of a highway somewhere and everything is covered by a thin veil of snow. It’s still. The streetlight’s beam is pouring down around him, a cone of light in the darkness of make-believe, ready to pull him out of this fake memory. I can hear the sound of his tenderness making his Korean sound like a bell on a mountain breeze:

Our family went from pinching our cheeks to making us share our food. No one really noticed how much you looked like dad until your growth spurt, like a trowel, spread your baby fat out neat and thin. Your cheekbones are high and exposed now. Our faces and bodies growing into the architecture of our father’s youth. The leylines of this vanished state are on our knees and thighs and your back.

There is a bright pink dress with cream polka dots the size of 500 won coins and shoulder straps fastened with hot pink plastic. I pass this dress in a shop window every morning on the way to dad’s office in Suyu, Seoul. It’s summer and we are with our estranged father in our estranged home. I am 12 and I think that dress will solve my problems. I will look good and someone will like me enough to relieve my left hand of its duties to my right hand, holding it at night so I can pretend it is someone else. It takes me a month to work up the courage one night on our walk home to ask dad and you to wait a minute. My Korean is as clumsy and undeveloped as my body but I ask the ahjumma if I can try on the dress. My dad pushes his phone through the curtain. Mom is on the other end. I hang up the phone, change, and run home in the dark because yes, mom, I have noticed. I run like I’m running away from every beautiful woman I have seen that doesn’t look like me: statuesque Korean women whose thighs don’t chafe and bone structures don’t compel their moms to ask if they want to get their cheekbones shaved down.

All the notes of our door click and bang and squeak. You are home and the symphony ends before it begins. Quiet. You are limping and your face is sweat-polished with stoicism. Summer two-a-days. Right hand holds an ice pack to your knee but you keep all of your gear on. You don’t sit down. You tower over me in your white plastic armor. You are getting ready for your second daily manhood mass. A mass that begins with Coach Woodfield holding a football over all of your heads, everyone shouting “kill, kill, kill” in unison. We share this masochism but we express it differently. Maybe all of this will make you feel more whole the way my runs will make me a woman. Cut you up and carve you out the way my one grapefruit, one avocado, and two miles do.

Ten stories up in Seoul and you’re more handsome than ever. We are standing in the elevator of dad’s apartment building. You’ve finished college and I just started but not much has changed. I watch you make silly faces in the mirror mounted in the elevator. You are pretending to amuse yourself but you are just scrutinizing yourself. This is before the idea of fitness being equated to sex appeal has found much of a foothold in Korea so there aren’t many gyms or men who look like you. It’s lots of white steamed rice and fat-marbled beef and svelte men in sharp outfits you don’t understand. The fat you are looking for isn’t there when you press flesh between your finger and thumb together demarcating it as your last barrier to satisfaction. Your plane leaves two weeks before mine because you want to be back in the gym.

It’s your 26th birthday and you and your girlfriend, Sharon, make a reservation. You want to see where I work. I lie and tell you I can’t get the day off. Cook’s hours, sorry, but come in anyways. I see you in the back. Table 20. If I was working, you’d be right next to me on the other side of my station. The lighting is dim but I got my 100 watts on and our dad’s dimples burrow deep while we embrace. I did it! I surprised you! This is my first time spending time with Sharon and I want to get on all fours with my palms down. I want to stand up and get back down over and over. Pray to her like dad showed me in all those temples. Mom thinks she’s ugly but mom is a fucking bitch sometimes and if she opened her eyes for a second she would take a knee. You are talking. You are engaged. I feel you love me and it’s because of her– her womanhood and her love. Maybe you’ll be a dad soon and you’ll have ten kids so you can play basketball with them like you talked about when we were kids, the headboards of our beds facing each other. “Ask me any question and I’ll tell you the answer.” Ohppa, I love you.

Soojin Lee is a pre-med student at Virginia Commonwealth University. This piece first appeared in Amendment.

Elise Ketch is a Communication Arts major and Product Innovation minor at Virginia Commonwealth University. She specializes in concept illustration and plans to pursue a career in user experience design. For four years she has served as an editor on Poictesme, VCU’s Undergraduate Literary Journal. This piece first appeared in Poictesme.