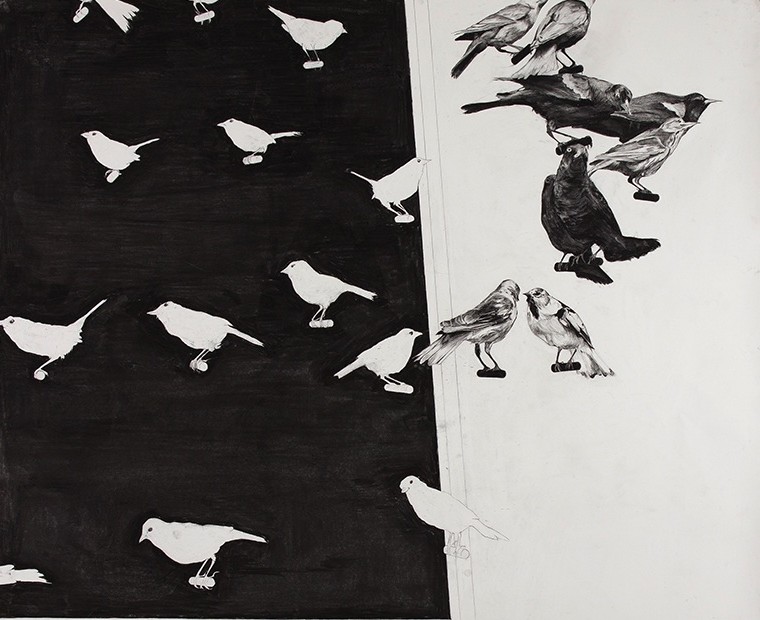 Drummer and bandleader Dave King mouths the word “poem” to his bandmates, indicating “You Can’t Spell ‘Poem in Concrete’”—another clumsily named King original—and the song begins. Guitarist Erik Fratzke strums major chords, bassist Adam Linz thumps along in step, and King ticks a plain, straight-eighth beat, culminating in a staple of his style, a stick smacked against the snare on the final quarter note before the melody arrives that doesn’t bounce back but is held there against the skin, smothering the sound. When tenor saxophonist Brandon Wozniak’s lilting melody begins, King leans back and slaps at his instruments with measured abandon.

To watch King at work, here tonight at the Artists’ Quarter in his hometown of St. Paul, Minnesota, with his band Dave King’s Trucking Company, is to be reminded of his distance from his peers in the jazz drumming profession in almost every aesthetic sense. Looking like a thinner, tattooed version of Sonic the Hedgehog’s archenemy Dr. Robotnik, with a shaved head and a goatee framing an off-kilter smile, King gives the impression that he is willfully unrefined, that his stylistic choices, musical or not, are all intended to keep him from finding himself bent over his drums in that familiar “jazz drummer” crouch, swinging pristine eights under a thousandth rendition of “Bye Bye Blackbird.” His playing is decidedly his own: a splintered, superglued amalgam of high- and lowbrow in which complicated and layered time signatures are treated with the gusto of a rock backbeat. Where most jazz drummers do their work on the ride cymbal—an austere metronome—King tends towards the snare, that cheesy hallmark of game shows and Twentieth Century Fox, producing long rolls and rifle-like accents and just generally beating the hell out of the thing. As “Poem in Concrete” continues, the innocent melody, like a mischievous child whistling and twirling her pigtails before kicking her brother in the shins, gives way to a jarring section of shifting time. King is in his element, smashing away as audience members knot their brows, tap their fingers, and try to figure out exactly what they’re hearing.

Jazz listeners have gotten used to—and, if we’re being honest, have come to enjoy—jazz’s unpopularity. For the price of fifteen dollars, they can expect virtuosic music, a quiet, dark, attentive room, and a predictably homogenous set of neighbors for the evening who will laugh at common jokes or ask about a book someone’s brought for the set break. If fans of the more popular genres get their transcendent experiences—those times when jubilant, vast audiences and iconic performers seem to meld—jazz fans get their knowledge that, night after night, their experience will be comfortable and their music often genius, even if it doesn’t shake the ground. Those who pay close attention to the music are akin to followers of boxing, both pastimes having seen more popular days and both now playing host to a more specialized, insider-type conversation. If in the past you may have tapped your foot to Duke Ellington or shouted for Joe Louis, you are now expected, to the delight of a few and the frustration of many, to identify 7/4 time or diagnose a too-wide hook leaving space for the counter.

Tonight, though, the audience is a little different. Upon entering the basement club, you can spot the regulars simply enough: they drift naturally to favorite tables, shake hands with people they’ve seen in recent weeks. Easy to spot, too, are the folks who wanted to do something “cultural” this evening and checked various calendars, as they look a little overdressed and unsure if they need to head to the bar or if a waitress will come around. But there are more young people than usual, people in their twenties and even teenagers, likely fans of the popular (for jazz) group The Bad Plus, with whom King has achieved notoriety by playing Nirvana and Aphex Twin beside knotted originals. Before the show, a pair of brothers dragging a father in tow produces a generational, soundtrack-to-our-lives moment unfamiliar to jazz club: one of the boys sings “She Belongs To Me” like he’s just discovered his father’s copy of Bringing It All Back Home.

When King enters, he adds to the familial atmosphere, his wife and two young daughters trailing him and then perching themselves on barstools while he unloads his cymbals. King greets the ticket-taker and bartender, moving like a man who hasn’t had to convince a fresh audience in a long time. They know the deal, he seems to think, and if they don’t, they’ll catch on soon enough.

The evening’s first song sounds like what would be expected from a King in charge of his own band, unrestrained by the influences of bassist Reid Anderson and pianist Ethan Iverson, who in The Bad Plus balance his ferocity. The rhythms King, Fratzke, and Linz introduce seem like some sort of antigravity chamber, an astronaut training ground for Wozniak to navigate. Beats come at regular times, but what those times are becomes harder and harder to tell as King subdivides differently at every turn. He is the cartoon character running ahead, painting a tunnel on the side of a mountain, and cackling to himself when we crash headfirst into it. People around the room give up on tapping their toes just as the song saves them, shifting to a recognizable, if oddly arranged, series of 60s-rock type chords with the saxophone darting overhead. As the tune winds down, that more accessible section morphs back to the hard-to-pin-down introduction so easily that it seems to taunt, saying, “See? Here it was the whole time. Was that so hard?”

Audiences usually giggle at musicians’ jokes out of politeness and recognition that these admired artists are, in fact, real people. But here, people are howling. King, panting from ten minutes of inspired drumming, starts to construct his comedic character for the night, one who will call them on their pretensions, use Fratzke as a Paul Shaffer-type foil, make up a telephone conversation with e.e. cummings, and sing Queensrÿche’s “Silent Lucidity” into a drum microphone following a fabricated story about how he and Fratzke used to huff paint behind a Minneapolis arena before rock shows.

At the night’s end, the audience retains its excitement, pulled along by its rapturous performer and master of ceremonies. As a song ends, applause gives way to King’s musings. At the end of these, laughter gives way to a new song. An expansive, meandering tune with a bass line that sounds like a car struggling to start is followed by what is now recognizable as a King-esque tall tale. King and his band, he reports, received a grant to write a large-scale piece of music and instead spent the money on front row seats to big-ticket sporting events. There, they would turn and face the spectators, who became increasingly furious that these people did not appreciate their view. The tension, King claims, feeds the creativity.

Introducing the final tune, he says, “This one’s real out there. We don’t even like it. But if I hear any talking—” he pauses for effect. “Any grumbling, we will start the whole thing over.” With that, he produces some exotic percussion instrument and a cello bow and begins eliciting sounds that resemble a ghost’s nausea.

Like every cultural institution on perpetual life-support, jazz has had its share of “ambassadors,” from Louis Armstrong to Wynton Marsalis. Though well intentioned, the resultant projects are doomed to fail, as nothing says something’s not cool better than someone coming to a school and explaining why it’s cool.

On this night, though, in a basement in Minnesota, it would be hard to imagine a better ambassador for the music. People respond to King’s playing, but also to his joy, his charm, his invitation to be involved in something more than an exhibition. King hawks his wares without being dowdy, and his audience warms, reacts. One would be tempted to proclaim this the blueprint for saving the music, for expanding the audience, for making jazz cool again. Then, one would remember, turning to the familiar neighbor and gathering the set-break book, that we like being on the inside, and we don’t really want jazz to be saved.