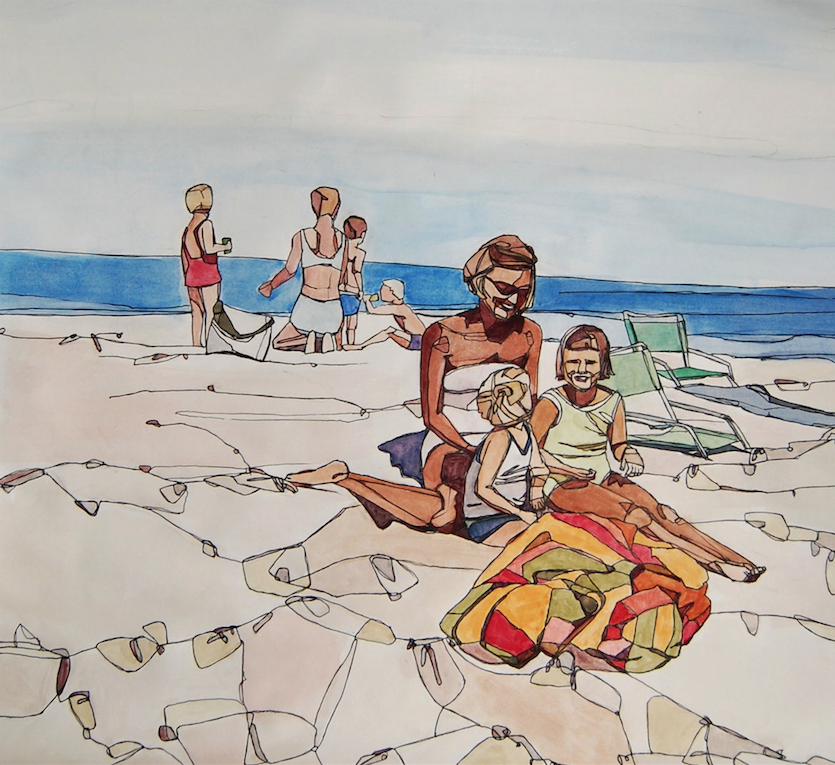 The snow sticks lightly to the road in a pleasant way, shrinking the lanes to wet tire tracks in a delicate white landscape. This is western Massachusetts in February, quaint as pastoral England. Snowy fields, classy coffee shops, large estates. Barebones deciduous trees line the roads like patronizing forefathers. Zoë sits in the passenger seat, her baby strapped into the elaborate car seat behind us. She turns to engage him in baby banter as he squirms. “He gets fussy in the car seat,” she says.

He is bundled in a cashmere sweater and a tiny hunting hat, the earflaps framing his face like red sideburns. He might be grumpy because he can’t hear anything.

Zoë is living with her mother after splitting up with the baby’s father, the lover who became the boyfriend then fiancé then crazy-manipulative-asshole. Now just the baby daddy. I am driving her mother’s Subaru Forester on our way back from lunch in the next town over, where we indulged in a glass of red wine. We both turned twenty-one in the last six months, and this is the first legal drink we have had together. It feels good to order Merlot. We are incredibly old, really, sipping an adult beverage out of deep glasses, a baby crawling around under the table. I’m not quite sure how this happened.

Zoë slipped into the role of motherhood the way I donned the persona of college student. Her once-blonde hair is dark now (pregnancy hormones do this, I hear) and sheared into a practical bob that allows for expedient showers. Zoë knows how to breastfeed, what solids her baby can eat, and where she wants him to go to school.

I’m driving because she hasn’t had anything to drink for months and one glass goes straight to her head. She looks cheerful, her eyes relaxed above flushed cheeks. Moving back in with her mother has not been the easiest transition for Zoë. She is independent and wants to raise her son a certain way, which is sometimes not how she was raised.

Singing is the only way to distract her soon-to-be one-year-old from bawling. He does not like being immobile. We try to remember all the songs we learned in Waldorf School, back in our colorful classrooms. We mostly have the melodies, but the words are fuzzy. What’s the one about lanterns, and the return of the light, and ringing bells? It’s gone.

I concentrate on the road. I am a careful driver in my old age. I used to drive fast—in the epoch long ago when I had orange hair and appearances to maintain—but now I pride myself on my grandma speeds and how close I sit to the steering wheel and pedals.

My teenage years in New Mexico—where all the highways are bedecked in squat white crosses—gave me a healthy fear of perishing in a car. I have seen the families visiting the memorials. They walk along the median of the interstate, buffeted by wind, inhaling dust and pollen. No one knows where they parked their square white Buick, or where the mother got her voluminous perm; but all the commuters on I-25 know where their son died.

On these New England roads I haven’t seen any crosses. Perhaps they are just buried under four feet of crunchy snow. I am enchanted by this tidy and civilized world where James Taylor hails from. “Sweet Baby James” is on repeat in my head. I want to find out where he lives, pay him a visit. He had a sojourn in New Mexico once upon a time; he might be glad to chat with fellow Southwesterners. He’d have something poetic to say about the white crosses.

“Though the Berkshires seemed dreamlike on account of that frostin’, ” I belt out. “With ten miles behind me and ten thousand more to go-o-o.”

“Make a right,” Zoë says. The road where her mother lives slopes down into a creek bed and then crawls back up through fields. No one has driven this road since it began snowing a few hours ago. It is blank as a sheet.

“Slow down,” she says, adjusting the radio. “It’s slippery.” I turn downhill and the brakes promptly give out. I repeat the Lord’s name in a litany, try to turn the frozen tires away from the creek bed and the looming tree, and fail. Zoë thrusts herself towards the baby in the backseat as I hold the steering wheel at arms’ length. My forehead makes contact with the windshield and is just as quickly released as the car recoils from the impact. Out of the corner of my eye I see Zoë thump against the dash. The baby starts crying weakly, and his mewing fills the vibrating car.

I stop talking to God and look at Zoë. She has already reached behind and unbuckled the baby. She is talking to him in soft, upbeat tones about everything being okay, shhhhhh, it’s all right. She is doing an excellent job of calming him down; I almost feel soothed myself. Thank God someone here is a mother.

The car is not. I try reversing, to no avail. Even if the front of the car hadn’t been damaged, the incline into the creek bed is too great. There’s no way I can maneuver it out. I put the emergency brake on (as if the car could go anywhere), gingerly open the door, and step into a few feet of snow and the chill of late afternoon. The front of the car doesn’t appear grotesquely bent, and there is no steam issuing from the hood. The tree I hit is, thankfully, small by New England standards. Still, I am dizzy with shame and guilt, and the goose egg rising on my forehead. So this is wrecking a car. I wish I had an instruction manual for car accidents. Now, place your hand reassuringly on your passenger’s shoulder. Give a gentle squeeze. But not too hard, because her back might be damaged. Because you just slammed her mother’s car into a tree. Now,unbuckle your seat belt before assisting other passengers. Life vests are not under your seat, so don’t sink.

A passing policeman stops. He would have accused us of reckless driving in a minute if it hadn’t been for the baby. Babies do wondrous things. A tow truck must be called. A neighbor gives us a ride up to the house. I would have preferred walking in the dwindling afternoon light, but babies are heavy and we have to bring the car seat too. I look back at the small tree, gashed by the bumper and still supporting the metallic weight of the hurtling machine; sorry, tree.

I would prefer never to get into a car again, I realize later. Their flimsy metal frames enclosed by glass, hurtling along on blurry black disks, are bound to crash. The cozy interiors with climate control and cup holders lull us into a feeling of safety. I had been duped.

In light of the fact that I was used to driving in the high desert, I should have been going slower, at a cautious crawl. I should have slowed down way earlier for that turn. I should never have learned to drive in the first place. I should have taken a stance against the deceptive contraptions. Now I understand car seats: the least we can do is strap the children into boxes that won’t fly out the windshield. Seatbelts for adults are less elaborate and more optional. The important thing, as always, is that the children survive. There is always hope that the next generation will right the wrongs of this world. Just the other day, it seems, I was one of the children who would do the saving. Now I’m part of the population that is supposed to use phrases like “for the sake of our children” and “think of future generations.”

Zoë’s mother is in the kitchen when we walk in, and Zoë explains what happened, letting the ominous phrase “car accident” loose in the house. Her mother anxiously asks if everyone is all right, and we are, though nauseous. Zoë’s back is tweaked and my forehead is swelling, but the baby is fine. Zoë and her mother talk about the incident, taking turns holding the baby close—not so much because he needs comfort but because they do. Zoë has crashed cars in her youth, two in fact, and I wonder how her mother reacted to those. This time we are not teenagers confessing to crashing a parent’s car. Zoë has been an adult since the birth of her son, I suppose, and I have gone through smaller ceremonies of different kinds.

Her mother makes chamomile tea. I don’t know where to look, or how to craft an expression that conveys the proper proportions of remorse and shock. I apologize; they say it wasn’t my fault. I’d like to talk more about the nature of ice and fate, the fragility of life, the absurd risks we take to get from one place to another. But I refrain. Anyway, I don’t have anything to say about what it might mean to kill or injure a friend’s son. I don’t have anything poetic to say about death. If circumstances had been slightly different I could have destroyed her life and mine, and not just physically: worse. So instead we talk about insurance, damage, repairs. We handle the whole situation with maturity and grace. As if everything will be fine, as if there are children within earshot.

A 2012 graduate, Laura Hitt lives in the high desert of northern New Mexico, where she spends much of her time trying to casually run into Cormac McCarthy. “Grown-Ups” first appeared in Prescott’sAlligator Juniper.