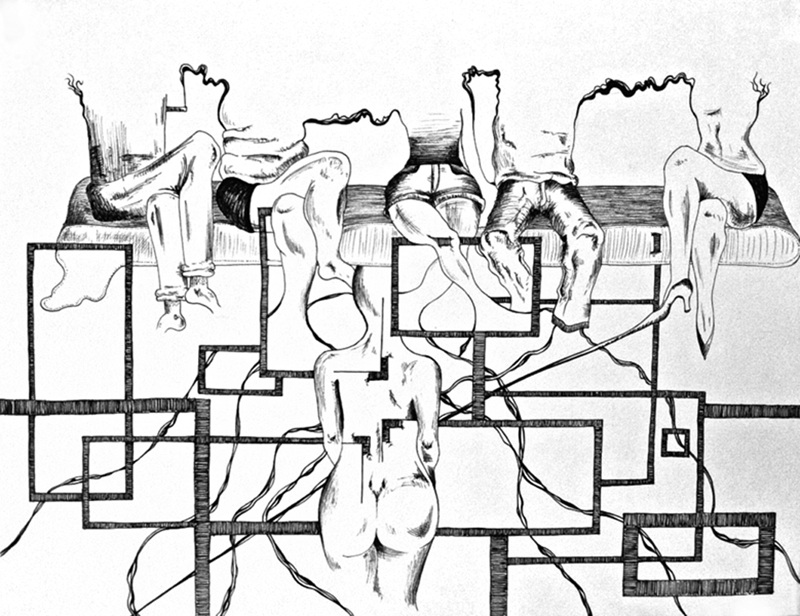 On the road that connects my part of town to yours, I waited for the nine o’clock night train to Penn Station. Octobers in Massachusetts smell wet, with the lingering humidity of summer and the imminent promise of snow. The train pulled onto the platform late, at 9:07, with a rumbling gray cloud of exhaust and the noise and fire of friction. I sat in the dining car, storing my leather coat and rolling briefcase under the table. I ordered an over-priced mini-bottle of cabernet, took off my shoes and settled into the ache of missing you.

At the next table was a woman with short silver hair spiked with hair gel; she was reading 63 Documents the Government Doesn’t Want You to Read. There was a bookmark from the Museum of Natural History about a third of the way in, at the point in the book where most people get bored or buy a new book or decide they don’t enjoy reading altogether. But not Silver Hair; she was stubborn and dedicated. A Star of David pendant hung between her flat, braless chest. It looked like your mom’s. She looked like your mom.

I remember you and me all summer on Cape Anne. Your burnt-red shoulders that peeled so easily and sunglasses that shrank your face. Entering Fairhaven station, I felt infinitely distant from our charcoal grill, your bitten-down nails, the road overtaken by juniper and moss. I remember the Fourth of July at your aunt’s in Hyannis. We hung on the seawall like Kennedys and you made me promise to look for another job, one where I could leave my stress at the office when five o’clock rolled around, one that wouldn’t own me. As the train pulled out of Fairhaven, I pulled my laptop out of my briefcase. A spreadsheet checkered with cyan, yellow, and red blocks of data was waiting on my screen, and I remembered all my broken promises.

At the table directly in front of mine, a man in a Yankees cap bit back pistachio shells with his teeth. Wasted, he lounged, his relaxed eyelids dreamily gorging on the girl sitting across from him. Headphones enveloped his ears; I could hear the tinny beats from my seat.  He was unnaturally tan for October, with a beard of white pimples and a square jaw. He chewed like a horse, moving his open jaw in a circular motion so I could see green mucus-y nut clusters with every masticating rotation.

“Pistachio Moss” was the color we finally decided on for the kitchen. It was a month-long debate (involving you and you) between “Sweet Daphne,” “Pale Avocado” and “Huntington Green.”  I was convinced they were all the same color. That was the winter we moved into a condo together on the North Shore, with hardwood flooring. When we said we’d go to beaches and ended up at malls discussing sconces, when you stopped writing poetry. In September, you finally got that job at the middle school teaching sixth-graders about the War of 1812, The Trail of Tears, Progressivism, Vietnam. And god, did you fucking hate it. Because they didn’t care at all. You started not to care at all, too.

At midnight, the train passed through suburban Connecticut’s backyards, which turned to shipyards, and then to junkyards that rusted in a pool of salty air. The East Coast all looked the same. Empty parking lots, office parks, downtown pizza shops, and the Atlantic, haunting and stalking each mile gained. A few reading lights came on in the car in front of me, but the train had turned mostly to shadows. As the promise of New York’s lightening streets drew near, I left your memory in the dining car and took a red-wine piss.

When I came back we were on the last stretch of tracks before the city. The quarter moon barely illuminated our path through walls blown out of granite by dynamite. A woman across from me was awake and reading People magazine. Her breasts were silver milk spilling out of a pink, low-cut t-shirt. She began to fall asleep, still holding her magazine, a satisfied look on her face.

On Friday nights you and I ate at restaurants. Thai places, tapas bars, family-owned Italian bistros in Gloucester, Rockport, Manchester-by-the-Sea. We were tourists in our own town. After dinner, we turned the heat on in our bedroom and opened the windows. You lay next to me in flannel shorts and a t-shirt from a play you were in sophomore year of college. Goodnight baby, you’d say. But it was never reallygoodnight. With your head on my chest, you moved your hands down my stomach. They were always so cold that at first I’d feel like little hands were punching me in the gut. You would humor me when I wanted to pretend we didn’t know each other, like it was our first time. But I think you were just bored.

That’s what they don’t tell you when you’re fourteen and learning how to put a condom on, Google-searching “boobs” and “sex.” After fifteen years of boobs and sex, you get bored. Boobs and sex don’t cut it anymore and you need to start pretending you’re with a stranger, instead of your beautiful girlfriend who teaches twelve-year-olds about civil rights. You start facing the other way, so you don’t have to see each other’s faces. So you can keep pretending that we “understand each other.”

In the spot where the silver-haired woman had been sitting was a man in a business suit, using a plastic stylus to do fancy things on his phone. It was one a.m. and he was eating a kosher dill pickle wrapped in a napkin, like a corndog. Yellow pickle juice dripped from his mustache, and he looked like an actor or a porn star. His shoes were square at the toes, black and shined with the smug arrogance of a bachelor. I could tell he didn’t think anyone was watching him, like he was getting away with something by biting into that fat pickle like that, by being repulsive. I took a strange joy in this thought; the satisfaction that I knew who he really was. Maybe he had a wife with a perfect ass and a Cadillac. Maybe he had gone to Notre Dame and so had his father and he played hockey and installed his own cabinets. But none of that mattered. Because I saw who he really was, some disgusting asshole eating a pickle.

In August I came home with a goatee from a business trip, wanting to fix things with us. As I walked up to our building, I pulled my small rolling suitcase behind me with the Jet Blue tags still on it, the elastics wrapped around the handle like vines, revealing our home address. When I walked through the front door, the lights were off in the office, which I thought was strange because I knew you were starting school the next day and had been working hard on a first-day lesson plan.

I went upstairs to our room to tell you how much I had missed you, to kiss you on the lips and hold you and ask what you had prepared for tomorrow’s class. I came up to tell you I love you baby. And then I saw you in our bed, tea-colored curls in your eyes and mouth, bent over like a baby learning to crawl, being fucked from behind by a man with a moustache. You looked up when the door opened. All you said was “fuck” and looked disappointed, like you wished you hadn’t been caught or that it hadn’t come to this. I turned and walked out, not breathing. The strange thing is I was embarrassed, more than anything. You think you’d be overcome with anger, like a shotgun would appear and you’d shoot everyone in a crime of passion. That’s not how it happened though. More than anger, more than devastation, at that moment I felt so fucking awkward, like I had walked in on my parents. You threw on some yoga pants and a bra and started yelling for me but I kept walking, and your voice grew quieter, until I never heard it again.

The train waited on the tracks at Penn Station for ten minutes or so before it could pull in. As I gathered my trash and slid my loafers on, I noticed a young girl I hadn’t seen before, sitting diagonally in front of me. She had a cotton face, clean and smooth with a few Irish freckles on her cheeks. She wore a white pearl nightgown, trimmed with lace and stained with ketchup; her bare feet dangled above the dusty carpet. She seemed around nine or so, and must have felt me looking at her because her head shot up in my direction like a bird’s. I thought maybe I knew her from somewhere, a friend’s kid or something. I looked away, suddenly feeling self-conscious and awkward.  The girl walked over to me and I tried to think of kid’s small talk. I couldn’t even think of adult small talk.

“Can I look at that?” she asked, pointing to the old Macy’s holiday magazine in the seat pocket in front of me.

“Thanks,” she said. She looked so goddamn familiar.

“Are we ever gonna get to New York? Or are we just going to stay in the same spot forever?” she asked, while I was getting the magazine.

“They’re going to let us into the station any minute. Then we’ll be in New York and it’ll be so cool.” Kids like when things are cool.

We were creeping into two a.m. when the conductor finally announced he had received the OK to pull into the platform. Suddenly, the train was lit, fluorescent and completely empty.

Amanda Bondi recently graduated from Emerson College with a BFA in writing, literature, and publishing. She writes poems and short stories about New England and is a soup enthusiast. Amanda never checks her voicemail. Her story first appeared in Emerson’s Gangsters in Concrete.

Originally from St. Louis, Elena Makansi is studying food, cities, and urban history. An environmental studies major, she survives on drawing, reading, writing, and taking long walks with her dog. She is inspired by the stranger things in life and loves surrealist art and children’s book illustration. Grasp was first published in Oberlin’s Plum Creek Review.