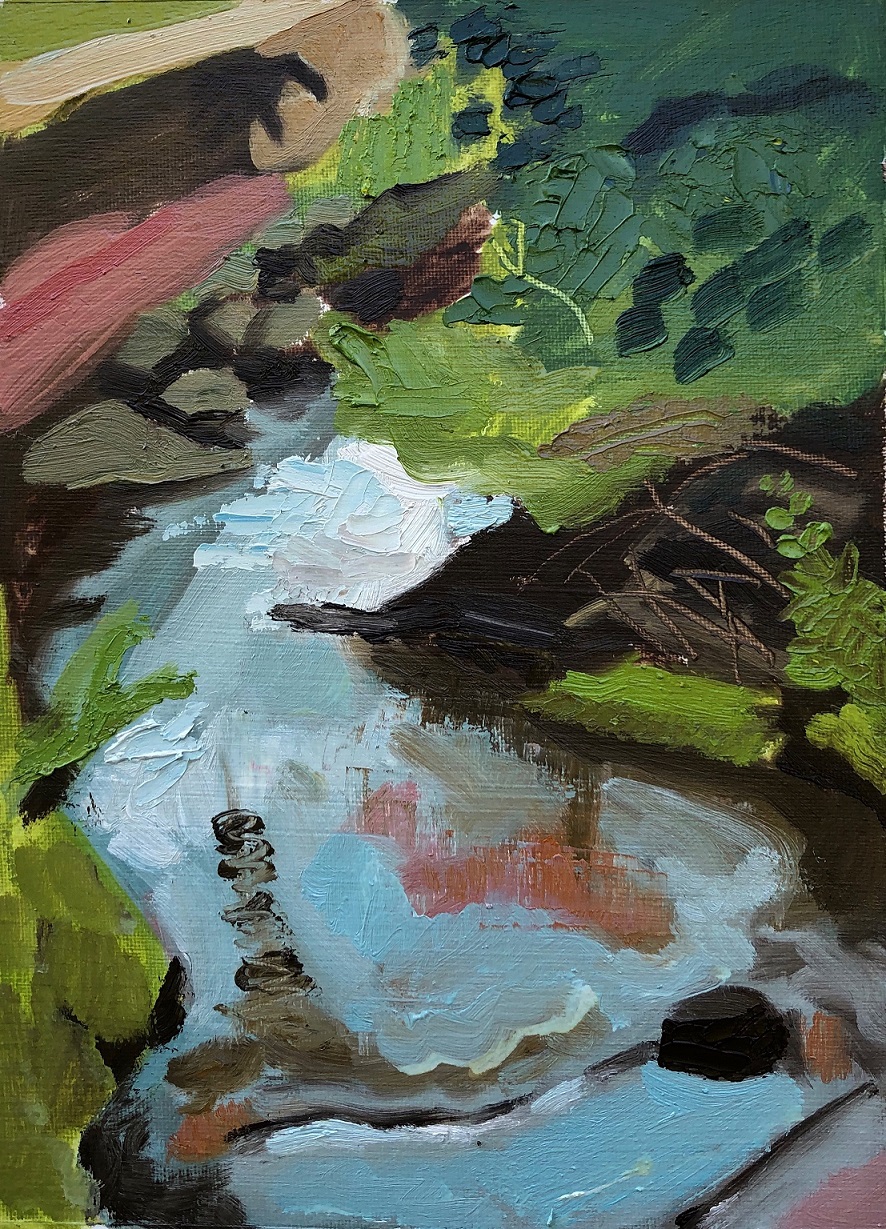 Laurel’s father was fired from his job at the end of August, a sure way to sour the remains of an already over-ripe summer. Its heat had been unbearable, with not even the small relief of a breeze to cut through the swelter. There was only the movement of mosquitoes and gnats, circling the backyard in masses that looked like suspended plumes of smoke. Laurel’s hair frizzed and curled in the damp air, aided by the droplets of sweat that clung to the back of her neck. She spent most of the summer lying face-down on the cool tile floor in the kitchen, centered among a semi-circle of three stuttering fans. If she got bored enough, Laurel would choose one and let her finger drift between the wire frame, see how close to the blade she could get without losing skin.

Her father had worked at the hardware store for eleven years. An old Employee of the Month certificate still hung precariously on their fridge, dangling next to a square of sloppily cut newspaper—her mother’s obituary, pinned down by a magnet in the shape of a cross. He never told her why he was fired, but Laurel could guess. She would often wake to find his car parked resolutely in their driveway, and her father stoic in his living room recliner. She was unable to confront him, only ever aware of how small she felt; the scrawniness of her limbs, the too-delicate pitch of her childish voice. Instead, Laurel tried to keep an air of indifferent curiosity when she would ask why he wasn’t at work. His excuses were never well thought out, nor were they well executed, as they happened at an alarmingly implausible rate. His boss had a family emergency at least four times a month, always miraculously opting to leave the store closed for the day. “Lucky for me, right Laur?” he would say, flashing a weak smile. Laurel was almost offended by his inability to create an even somewhat convincing lie, if only for her. Most days, she wanted nothing more than to be convinced.

After his initial anger had dissipated, the ravings about poor management and unfair dismissal weathered down to the occasional grumble. “Good luck without me,” he often whispered sternly under his breath. It was a mantra that he nurtured, carried with him throughout the day.

Laurel didn’t see him much after that.  He claimed to be in search of Help Wanted signs around town, but she could just as easily imagine him driving aimlessly, alone and unbothered by the well-wishers and hearty condolences from friends and neighbors. When he was home, he could barely meet her eyes. His gaze was always somewhere else, lingering in the empty corners of their house. It gave her the sensation of being entirely see-through, like she wasn’t even there at all. She would pinch herself sometimes just to be reminded of her own solidness.

In September, she dug out the small bin of school supplies from the back of her closet, sorted through them and hoped what she had was enough to cover the list Mrs. Parson had sent out to the eighth-grade class. She ate bowls of cereal for breakfast, lunch and dinner.  Occupied herself at night with the black and white movies that played continuously on one of the public access channels—saw her mother’s face in every grainy, doe-eyed film actress. She slept a lot too. Something had settled in her bones, burrowed its way in, made it difficult to stand or run or climb trees. Maybe it had always been there.

When school started, she would leave and return to an empty house.

It was one of her father’s old coworkers who offered to take him hunting. He showed up at the house over Thanksgiving break—his wife and an armful of brightly colored Tupperware containers in tow. Word had spread that her father was found passed out in the front seat of his car on some dirt road on the outskirts of town where the bars sprouted up like neon-signed beacons. Laurel suspected this was more than a random, good-natured visit. Her father’s coworker—Marcus, a salesman with perfectly straight teeth and an oddly pointed chin—invited himself in with a natural ease. His wife, Joanne, stood stiffly at his side and compulsively plucked at the wool of her emerald green sweater. Her father didn’t even feign embarrassment over the state of their house.

The dinner was a stiff collection of mumbled pleasantries and dull conversation. Her father never touched his fork. Joanne pecked at the vegetables on her plate one by one before moving on to the miniscule strip of turkey she’d sliced for herself. Marcus did most of the talking.

“You’d love it man, I’m telling you,” he said, pointing his fork at Laurel’s father, a piece of turkey still speared on the end. “I know it’s been a rough year for you,” he continued, ignoring the cough Joanne stifled under her hand. “But,” he stressed, “this would be such a trip. I still can’t believe you’ve never been hunting before. It’s like a rite of passage.”

Joanne chuckled lightly, the sound echoing uncomfortably loud in their sad dining room. For such a small house, the rooms had a way of feeling cavernous, like they might swallow you whole.

Marcus remained persistent. “It’s spiritual almost. You’ve got too much going on up here.” He tapped his middle and pointer fingers roughly to his temple. “You’ve got to let that anger out somehow.”

After dinner, Marcus and her father sat lethargic in the small wicker chairs in the backyard. Laurel watched them from the kitchen window, eyes peered around the flimsy white curtain stained yellow with water damage. Marcus gestured openly to the wooded expanse before them. Her father only nodded.

She was relegated to dish duty with Joanne, who had the chore down to an exact science. Laurel watched with poorly concealed awe as Joanne scrubbed the white porcelain with more strength than she imagined possible of the small woman. Joanne would stop, hold a plate to the light, and instantly find a new smudge or food stain to obliterate with the rough side of her sponge.

“Maybe I could talk to your father about letting me take you shopping for some new clothes,” Joanne said casually, setting the last plate down to dry.

Her mother’s fingers had been long and slender, reverent in the way they used to comb through Laurel’s hair at night. She wondered if there would be anything left of them now, or if they’d deteriorated to bone.

She heard them first when they returned, a faint hum of noise buried beneath sharp winds and static from the TV. The men hollered. Their heavy boots crunching on tightly packed layers of fallen and dried leaves. Laurel scrambled to watch them from the window above the kitchen sink, overlooking the dense woods that crowded the edge of their property. The forest, without its plush of green, resembled barren lines drawn from charcoal, endless columns of wood in early stages of decay, a disease from the Emerald Ash Borer that spread hungry through the state.

They hauled the buck behind them, its front and hind legs tied together with stretchy black cord. Laurel could just make out the brilliant white of its antlers—extended like two hands, each finger broken. Her father, usually quiet, looked strangely sullen despite the success of his first hunt and the buzz of praise that flowed steady from the men around him. His shoulders slumped, and each step he took dragged along the dirt, his own body too laborious to carry, a dead weight that rivaled the buck being slung about beside him.

Within the month of her father’s return with the buck, its head had been stuffed, dried and placed obnoxiously center on their living room wall. Marcus had insisted that her father display his kill, and also, he knew a guy who did the best taxidermy in the county. The trophy was placed in a way that kept it visible at all angles, a dark spot that congealed in the corner of the eye.

Laurel caught her father staring at it several times. She tried to discern what it was that he could be seeing in the eyes of the buck, now just two shiny black marbles. She attempted once, to mimic her father’s stance and stare bravely at the buck—resisting the urge to toss a blanket over its disturbingly empty face. She only saw herself reflected back.

The blizzard arrived suddenly. The light flurry of snow that was constant through December turned wet and heavy, burying their house in a single night. The power lasted for a day, enough time to watch the news broadcasts and weather announcements that declared their county in a severe winter storm warning. Laurel moved blankets, two sleeping bags, and a handful of pillows into the living room, assembled around the fireplace. Her father collected himself long enough to kindle a fire with leftover chopped wood from last summer. The buck was still, only ever watching from its mantle on the wall.

One evening, he sat quietly in front of the weakened fire, its flames fizzling out in desperate licks across the splintered wood. From Laurel’s spot, upright in her sleeping bag against the wall, she watched the fire shift over his face. Its shadows lifted and fell over his eyes and nose and cheeks. His very bone structure changed by the whims of the tiny orange blaze.  She wondered if she ever knew him at all. Laurel could run her fingers over her own face, feel the shape of her sloped nose and deep-set eyes, from her father. Feel the shape of her small forehead and high cheekbones, from her mother.

He must have sensed her stare, turning quietly to face her. Laurel was struck by their similarities and was at once forced to acknowledge that the loss of her mother had left twin incisions in the both of them.

Laurel couldn’t remember the last time he’d spoken about her. “Yeah,” she responded, unsure of how to proceed. She’d gotten so used to their new dance, the tip-toeing in each other’s presence, that she didn’t remember what it felt like to simply talk with him. She hoped to catch and hold tight to his sudden sentimentality before it fluttered away. Outside, the sheets of falling snow made hazy, luminescent curtains across the window, obscuring the world beyond the small square of their living room.

He shuffled closer to her, his hand reached out slightly before pulling back to rest adjacent to hers on the wood floor. There was the crackle of firewood, the sniffling of their red, runny noses and the soft exhalation of breath. When he glanced back at the buck, she looked back with him, and wondered if everything looked the same in death.