Entropy & the Irrefutable Nonsense of Being 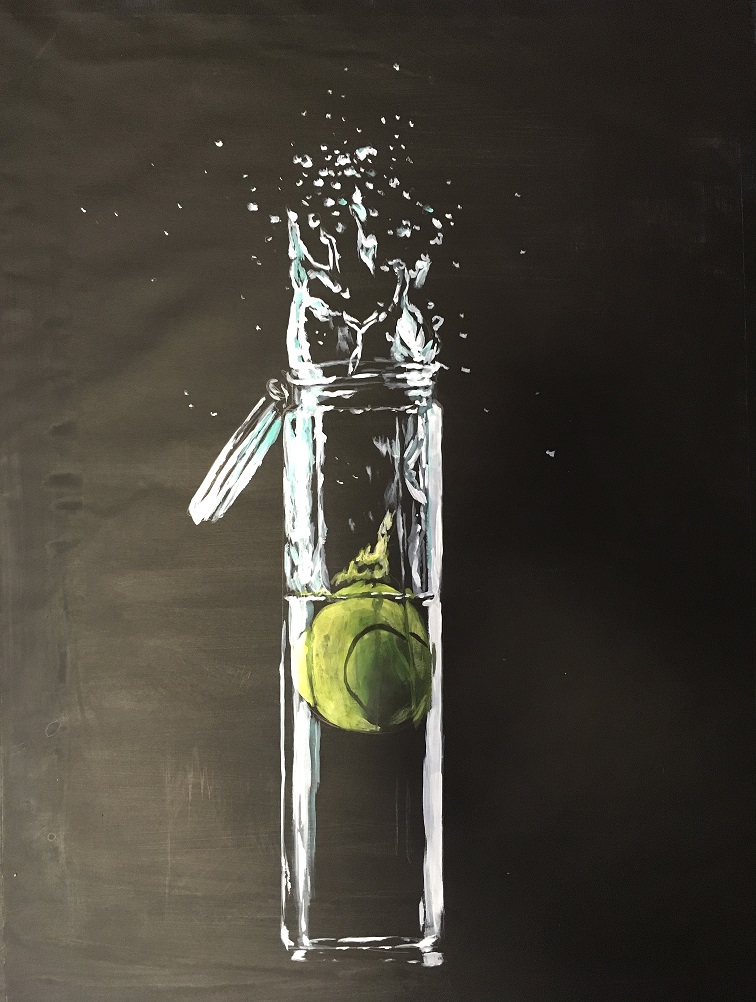 “The people or countries that seem to have the highest happiness index seem to embrace the chaos of being human, meaning they don’t pretend that life is anything other than chaotic and random.”

BestFriend is taking AP Chemistry. We sit by the bathrooms after school in the sad excuse of a senior lounge and she tells me about entropy.

“So basically because all of the energy in the universe is moving outward forever and ever and ever, there’s this degree of randomness or disorder that exists in literally everything. We’re literally learning how to measure chaos.” She tells me about how there has to be equilibrium for it to be valid, and how there’s also this thing called enthalpy, but it’s not as cool. I tell her that entropy would be a good name for an album, and now we’re coming up with science parody band names, all thought of the actual concept gone.

Lying in bed later, I think about measuring disorder. I have lots, probably. Generalized anxiety, obsessive-compulsive, attention-deficit (with hyperactivity in parentheses), premenstrual dysphoric, and a slew of others that have been suggested as possible answers to why I’m like this. I spend my days with disordered eating and even more disordered thinking. Disordered, dysfunctional thinking which, for simplicity’s sake, I refer to as the Crazy.

In psychology, a disorder is measured based on whether or not it affects a person’s daily life and/or ability to function. I find this odd, because sometimes my disorder is the only thing that actually gets me out of bed. Sometimes, being in my bed more than twenty seconds past 5:15 a.m. is the Wrong Place and I Must Get Up Right Now Before I Die.

Of course, just knowing that in my bed is the “wrong” place, does not give me the slightest indication of what is the “right” place. Yesterday, what got me out of bed was, “I want coffee.” So, I put on three more layers of sweatshirts and leggings to protect me from the air and I went downstairs and made coffee. I made cinnamon toast, but I couldn’t eat it, so I ate honey-twist pretzels in tiny bites and hoped that was enough to fulfill the “take with food” instructions on my prescription bottle. That’s the thing: it’s all nonsense.

Some more of my Crazy nonsense has included:

Some people might say that calling my illness-driven thought process “nonsense” is counterproductive. But I find itthem much easier to deal with that way. It’s not as harsh as calling  “unhealthy” or “irrational,” but it’s also not giving them any credibility. Dubbing them nonsensical makes them absolutely random and absurd, and thus gives them no reason to have any bearing on my actions. Calling the symptoms of my illness nonsense also takes away some of my need to understand why I’m like this. It’s a loophole, and a work in progress. We’re all basically just rearranged stars; the universe is trying to pull itself apart, and we literally try to account for it in our scientific equations; life is complete and utter chaos. It’s all nonsense.

In Scrappy Little Nobody, Anna Kendrick wrote, “the crazy wants out That’s why I try to embrace it. The more I ignore the Crazy, the louder it gets, just like the pre-kindergartners I teach all summer. And trust me, I have enough noise. Instead of fighting a part of myself, why not just declare it nonsense and accept it for what it is? It’s here and it’s not going away, no matter how many therapists I tell, no matter how much yoga I do, no matter how much I try to smother it, no matter how many pills I take. I have no choice but to live with my brain the way it is and continue working to make it better. I’m trying to lean into the nonsense and appreciate the chaos of it all, instead of destroying myself.

BestFriend and I go to Applebee’s for milkshake-drinking and feelings-eating. We sit in a booth and somehow get to talking about our school trip to Spain. That trip was the first time I ever saw her truly angry. We were at the Tarragona (where I think someone was once burned alive), and it had taken us many hours longer to reach than it should have. Most of the people in our group were complaining. Like, spoiled rotten, rich-kid bitching. We were in Catalonia at this Roman amphitheater that was built at the end of the 1st century B.C., and these kids were complaining about the fucking bus ride.

“Remember at the Colosseum place,” I say, “You got so mad I could feel it.”

The memory strikes a nerve, and she goes on a tirade about the ungratefulness of people, declaring, “You can’t even appreciate that you’re literally made of stardust!” She shouts this proclamation around a mouthful of gooey, apple-cinammony goodness, hands flailing, incredulous. I nod and take another bite of our cheesecake.

She’s right. All the carbon and hydrogen and oxygen in the universe came from the stars. Originally, they were just hydrogen and helium, with carbon and other substances to follow, forming over billions of years. My Earth Science textbook tells me that all the elements we have now were formed from the matter that exploded at the time of the universe’s creation. To say we’re all made of stardust is a pretty good way to put it. So, probably, some of my atoms are like a billion years old, and none of this shit matters. That’s what I tell myself, anyway. The best rebuttal for Capital-C-Crazy is to agree.

BestFriend tells me I shouldn’t call myself Crazy.

In thermodynamics, entropy was originally introduced to explain why part of a thermodynamic system’s total energy is unavailable to do useful work. Even though scientifically, the system should be able to use the available energy, it can’t because of this degree of disorder in the universe. Sometimes, I sleep for fourteen hours and wake up completely refreshed and full of energy. This energy is available to me for all sorts of useless and/or random purposes, such as deep cleaning, training my cat to walk on a leash, or creating a Logic demo of Miley Cyrus’s “Wrecking Ball” on chimes and marimba. Not for calculus homework or essay writing, though. That is the Off-Limits Energy that can only be unlocked on a new moon, with two shots of espresso, between the times of 7:46 and 10:28 a.m. Or sometimes in the middle of the night during Halloween week. Perhaps if I am on a plane to Texas or in the middle of a chem lab, I can focus my Crazy enough to get some goddamn work done.

Me: Do you remember when you were telling me about entropy? What is it again?

Her: It’s a property of heat in chemistry

Me: Doesn’t it have something to do with disorder ?

Her: YES the universe is a giant ball eternally trying to pull itself apart

Even though I have learned to accept my illness for what it is, I still do a lot of work to manage my symptoms. hat work includes putting myself to bed early, eating as healthy as I can, and going to therapy regularly. Therapy isn’t always a perfect process, though, and I’m still working on finding someone who understands my brain and personality.

GunTestTherapist tells me that we need to try to unlearn self-destructive patterns. I don’t remember learning them though. How do you unlearn something you don’t remember learning? I call her GunTestTherapist because she once told me a trick for when I “can’t” do something (she’s the one who added the quotation marks, not me). She said to ask myself if I would be able to do the thing if someone was holding me at gunpoint. This pretty much backfired (bad choice of words) because then I would become paralyzed by the image of a strange man holding a gun to my head when I’m too anxious to speak. I don’t see GunTestTherapist anymore.

I’ve been anxious my whole life. I used to get sick to my stomach whenever I was going to be in a stressful situation (not that I knew the actual cause). My stepmom would make me breakfast and I would start to feel sick when she put the plate in front of me because I was too anxious to eat. I used to get scared at night I’d go find my dad and tell him, “I want to sleep really bad but I can’t and I keep hearing this voice that says I’m going to kill you’ and also my nose is stuffy and I can’t breathe.” I grew out of a lot of this and honestly forgot about most of it until recently. But lately my panic attacks feel a lot like being that scared little girl who didn’t even know she was scared. She just knew she couldn’t eat the eggs and she couldn’t do her homework and she couldn’t go to softball practice today. Or tomorrow.

Some of the best advice I ever received was from a mental health positivity Tumblr page (not kidding), which said, If thinking positive is too hard, think neutral.” Sometimes insisting everything is good when it isn’t does more harm than good. But thinking neutral allows me to see the whole picture and realize that I’m alive and breathing, which sometimes is all I need to handle whatever is going on. In my Earth Science class, we learned about the Quantum Multi-verse Theory, which suggests that our universe could be just one of an infinite number of universes making up a “multiverse.” Assuming this is true, there is a universe where I’m doing so much better… and another where I’m so much worse. There’s a line of “I Am Here” by P!nk which goes, “​I can think of one thousand places much worse than this…” and that is what I try to live by. I’m doing fine. Maybe my Crazy is just human.

Tay Rose Meehan (they/them) sneezed on their little brother when he was in NICU and still hasn’t lived it down after 16 years. Sometimes going by pen name “anxious burrito”, Tay studies creative writing, publishing, and music technology at Susquehanna University in Pennsylvania. “Entropy and the Irrefutable Nonsense of Being” first appeared in Essay.

Abigail Nasari is a third-year student from Tanzania currently studying at Hope College as a studio arts major. Most of her work centers around the realistic portrayal of the people and objects that surround her through painting and drawing. Art Instagram: @abin.art2

The Nature of Time