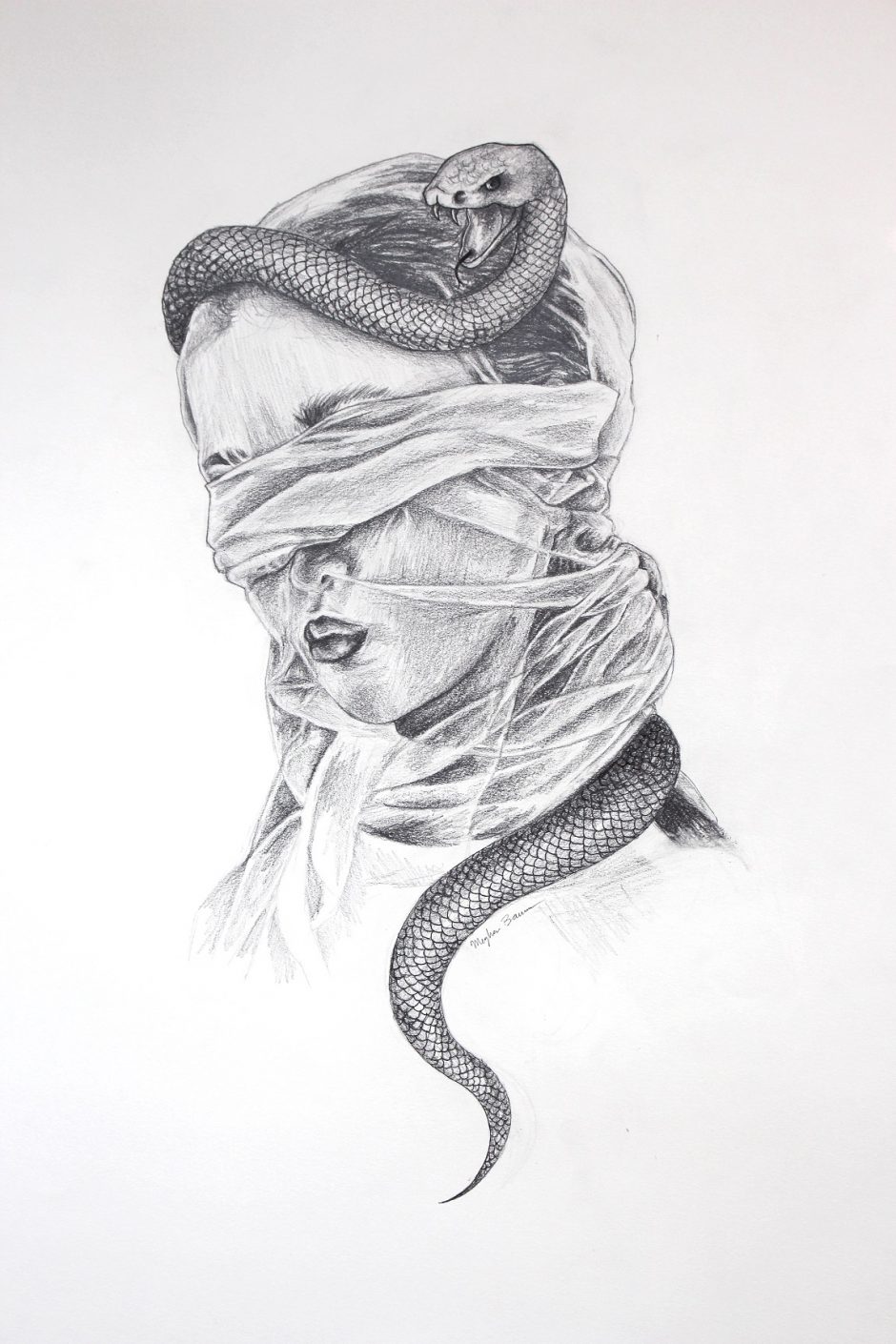 I had this dream once that felt like it had been stripped from an indie Halloween movie: exposed brick walls, threadbare fear scattered across the floor like breadcrumbs, a ghostly presence unfolding in rattling noises and too-cold indoor breezes. I often vividly remember dreams, but most of this one fell away when I woke up. Most of the dream, that is, aside from my mother taking me by the upper arms, gazing lovingly but sternly into my eyes, and declaring, “They’ll be nice to you if you’re nice to them.”

She was, naturally, talking about the ghosts.

I am not afraid of ghosts. Or, more accurately, I don’t believe in them. This belief and I…we have a complicated relationship. I deliberately don’t answer its texts. It never returns my calls. Yet, all too often, we find ourselves lying side-by-side in my room at night, talking until our voices scratch into silence.

My grandfather died in August during a two-year period of my life that swarms behind my vision now—a period filled with births and deaths and shuffled homes, but still out of sight, as they say. In hindsight, his passing was probably the beginning of that period: a reckoning spelled out in church bells ringing in the distance and yellow butterflies landing on the hood of my mother’s gold 4Runner and a swath of that famous big, blue sky.

By the time my mother found out about his death, it was too late to try to peel back the years and amend the cracks we pretended weren’t in the woodwork. She told us instead to remember what we could of the good—the soft sweetness of the buttermints he always kept in a crystal dish by his chair, the smoked syrup warmth in his laugh, the wayward questions that only he knew how to piece together and offer the world.

August. Circle, Montana. Like most of the Midwest, Circle is not known for its humidity. Instead, as we stood in the middle of the small graveyard in town, the heat slid a calloused hand around the back of my neck and squeezed. With every step, dry grass crunched beneath cowboy boots and sneakers, and sweat slid like tears down the temples of a dozen strangers. A stiff breeze crawled close, paused, and edged around us, bowing its head toward the preacher before it streaked away through crabgrass and plastic flower arrangements.

We stayed at my grandma’s house that night, after the funeral, like we do every time we visit. A correction should be made here: my grandma does not live in Circle, Montana. Rather, she lives northeast of it, some ten or fifteen minutes up Highway 13, depending on how well you follow the speed limit. (Montanans, historically, are not known for following the speed limit.) Her home—a long, rectangular trailer—is white, her detached garage square and blue, and, in August, the surrounding acres of fields the silken gold of wheat just reaching harvest season. The dirt and gravel that serve as her driveway bump over a creek that is cotton-dry more often that it is trickling. Aside from a small, old stable and a pine tree, which frankly has no business surviving in the middle of the eastern Montana plains like it is, the landscape is just wheat fields and a single ribbon of highway stretched into dusty horizon. Unless you are facing a wall, voices do not echo here.

I slept on the couch that night, blanket up to my collarbones despite the heat that had snuck in and sunk in during the day. Outside the window was just darkness, the fields sloping into oceans of ink and the sky glimmering its diamond-cheeked reflection. Inside the window was the off-tandem ticking of two of the seven clocks stretched between my grandma’s living room and kitchen, the stubbornly stable glow of the light above the stove, and the scent of home from my pale blue pillowcase. Between midnight and four the next morning, I kept waking to the stutter of my own heartbeat and scanning the space—first outside, then inside—and waiting for a sign. Anything. A crooked shadow falling from the multigrain Cheerios box or an invisible finger tapping the window through the old screen.

The thing is, I was born into a family well-versed in ghosts. Any one of my immediate relatives has a story to share—knocks echoing on walls splitting empty rooms, TVs flickering on and off, or locked doors swinging slowly open. Even my grandmother, who is not prone to williness or nilliness, admits to some unexplained experiences. And, as I imagine most ghost-loving families do, they love to swap stories, rehashing the same experiences until their fingers bleed from peeling back the onion skin and digging their fingers into the heart of the story until the words fall with a dripping squelch to the dining table and we can resume carving the Thanksgiving turkey in appreciative silence.

I am the phantom of my family—unexpected and unexplainable and far too ready with a reason every time an ornament falls off the tree by itself or the gate swings open and clips the side of the house on its own. I have no ghost stories, other than the ones I make up or the ones that aren’t real spirit stories but I constantly and ironically claim are. This is how it has always been, and for someone who preaches so often about the power of storytelling, no story has ever been able to sway me.

The morning after the funeral, my mother and grandmother sat at the dining table in the red suede kitchen chairs my grandparents have always had and sipped my grandmother’s trademark watery coffee, and my mother, in the tone and volume of one talking about the price of tomatoes at a farmer’s market, told her mother about the flickering oven light in the middle of the night. My grandmother, quieter and more skeptical, admitted that she’d been smelling cigarette smoke in the corner where her husband always sat, fresh and acrid as though someone was standing beside her with a lit Marlboro Red in hand.

When I sat up and asked when it happened, my mother’s eyebrows pinched in thought. She wasn’t sure, but she knew I’d been asleep. I’d even been snoring. Just a little.

As with any family of ghost storytellers, we have one story that’s our calling card. For some people, it’s a woman in a white dress peering out the window or footsteps earthquaking from the attic or a child’s voice filling an empty closet. For us, it’s a story about me.

My sister had an organ transplant when she was two years old, and as the story goes, the donor refused to leave. It was a typical haunting—an unseen hand navigating staticky radio stations, turning the TV on to watch Jeopardy in the middle of the night, knocking on the plaster above my sister’s head while she lay in bed—and an atypical one. When they asked him by name to stop, he did. He could be felt in cars or at the feet of beds, a shake in the fabric or a heaviness in the air. And then, more or less four years later, it just…stopped.

“Maybe it was just a coincidence. Weird timing and all that,” one of them will say, recounting the story as they scrape together the last bite of mashed potatoes with their fork. “Or maybe it…wasn’t. Maybe it was more.”

The morning after the funeral, I slunk back into the couch and turned to prod my fingers through the slats of the yellowed blinds. Outside, it was nothing but wheat and fragmented gravel and the neighboring farm’s cattle cresting the hill, little more than toast crumbs on the kitchen table at a distance.

The familial belief in ghosts was on the edge of my mind that day, splashing over into the space where that two-year period of my life would later come to join it. It was there then as it had been since I was born. Since before I was born. At my mother’s story the night before, it lifted its eyes and frowned and bumped its head against mine. And after the dream that would follow my grandfather’s funeral, the belief would replace my mother’s hands with its own, and in the same gentle tone would implore me to look into its face and see it. Just once.

I sighed and pulled my hand away from the blinds, mourning the loss of my mother’s experience. I must have just missed him.

Lauren Foley is a writer and graduating senior in English and Spanish studies at the University of Minnesota Twin Cities. Her work appears in The Tower and The Wake, among others. This piece was first published in The Tower, 2020 edition.

Meghan Bauman is an artist from Portland, Oregon who recently graduated with a Bachelor of Science in Nursing. She received a scholarship to study art in college along with her nursing degree and has remained interested in the connection between creative expression and health. She is currently researching the effects of art therapy interventions for behavioral symptoms, quality of life, and well-being in older adults with dementia. You can find more of her work on her Instagram @practicing_resurrection. Forbidden first appeared in OPUS, Hope College’s art and literary magazine.

Based on Your Credit Score , You Qualify for the Following Subpar Human Abilities