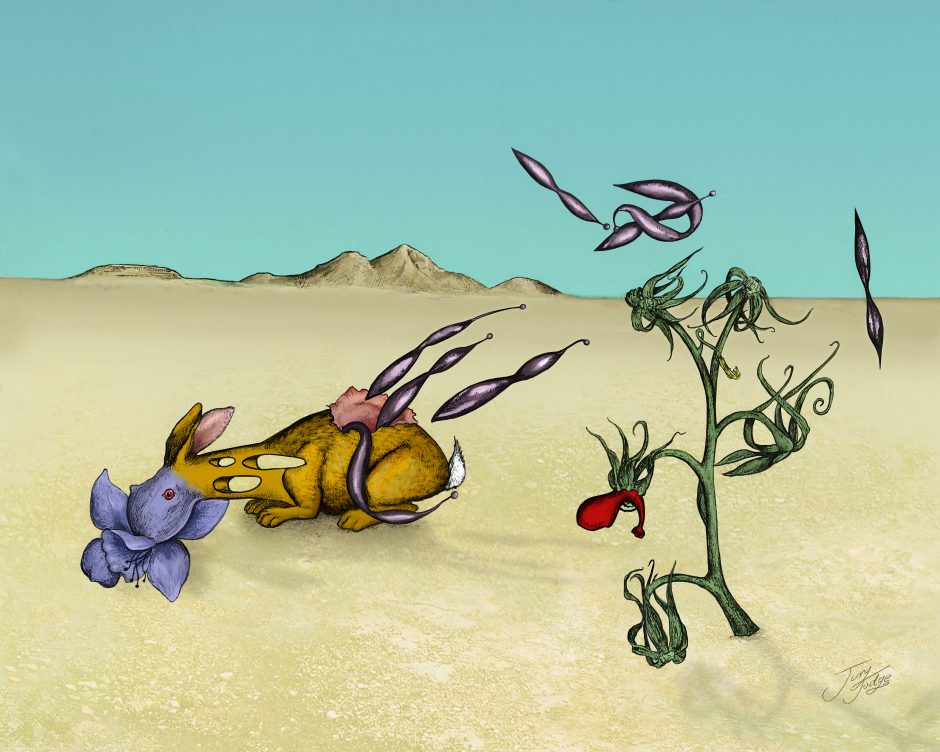 My father sits cross-legged on the edge of the couch, a plastic bowl in his lap and a knife in his hand. He peels and wedges two or three, portioning the pieces. Butter stands at his feet, eyes bright, trying not to scratch the skin beneath his yellow coat. He eats first, catching pieces in his mouth.

We catch too, sitting on couches with pillows drawn up, streaming videos screen to screen. Often songs from yesteryear, crackly black and white, women in bindi and kohl. We talk above the songs and catch above the couch, plucking pieces from the air. My father throws, cricket arm to good use. This is where life begins.

Have dad make this pachadi because he follows instructions. Have mom make everything else.

Once upon a time there was a princess who filled her empty pockets with books and pride, who could best most men with her sword and took no notice of princes, until the prince took no notice of her. Such a story begins on a train from Hyderabad to Palakkad, where the princess arrived with her ladies in waiting and came across a Most Unlikely Prince. All hair and bell-bottom jeans, pastel among his colorful friends. The son of a postman. He counted his words. She’d lost count of hers long ago.

She knew Unlikely Prince from somewhere, here and there. They’d exchanged pleasantries and his quietude unnerved her. On the train she lashed him with her sword with his back turned. Ladies and gentlemen gasped.

He patched his wound and bade her good day.

The princess tossed her hair behind one shoulder in a show of grace and elegance. Her pockets were empty again, save for the book she brought for the journey. The ladies in waiting chattered in the chambers of the slow moving train. She didn’t notice.

She tried to apologize to Unlikely Prince, twice. But both times she found herself five feet from his booth in the train, and turned back. And for two hours she watched the back of his head, tilted away from her. He stared out the window at passing shades of green and brown.

At the snack car she purchased an apple, bruised but red all the same. She handed this to him. She couldn’t speak, but he heard anyway.

With this fruit, accept my apology.

With this fruit, accept my love.

They grow in our backyard, past the edge of the pond and into the valley where acorns sprout. Three trees that sag in September until Neha and I, with baskets, pick firm fruit for jam. Pots sizzle, steam rises, and we struggle over balance of fruit, sugar, and pectin. We run out of pectin because I drop an open box on the kitchen tile. But in the end we fill nine mason jars that I’d rather use for make-your-own candles and artistic pencil cups. We give half to friends and forget the rest in the back of the fridge, eating our bread with butter instead.

I watched my aunt at the stove, stirring plum chutney, and I wondered why she never had another child. Megha was seventeen and when she came home from school Mema put down the spoon. There were cheese crackers for us both, ants on a log, leftover payasam in little teacups.

Megha was a tall, thin child with both her knees skinned from volleyball and her hair brushed straight on each shoulder. We ate and the barrage of questions began—how was school? How was the physics exam? 98—what happened to the other two percent? No, I’m just kidding sweetie. Have you given any thought to classes next year? Yes I know it’s only September.

Megha had the flattest American accent of all the cousins even though she was the one in Jersey and could take Malayalam lessons. She talked like Taylor Swift. And she didn’t speak much, only Mema did, answering most of her own questions the way she did when on the phone with my mother. When Megha left to do homework she went to a tidy room, the whole house was impeccably tidy.

I wondered why Mema never had another child until Checha strode in, his voice displacing air in the room. And I realized that between the three of them, in this vast house, there just wasn’t enough room.

It was an unknown quest that ended with a trip to the Asian grocery store on Dale Mabry Road, when my father stopped in hoping that Asian meant the whole continent today. It did; we found it between rambutan jelly and jarred lychee, the nungu. Smooth, translucent, nestled in sugar syrup. Its absence was the downfall of twenty years in America, according to my father. And while it was not fragrant, plucked fresh from the palms of Guruvayoor, it was a start.

When my father ate he remembered bike rides with Dasettan, who stayed out late and ate chicken curry on school nights. He remembered the untrimmed mornings of monsoon, sand, stolen books from cabinets. When my mother ate she remembered early courting days, wearing cotton saris while a young man took her to the palm trees. Eventually the memories came together and bled into others. Remember the trip to Newark? The old man at the Cracker Barrel? The apple on the train?

When we ate, my sister and I, we remembered nothing. It tasted terrible.

We called her the orangutan, for her ears like teacup saucers and her head like a coconut fringed with hair. She grew in pieces, feet and hands before body, legs before waist. What emerged in the end was a whole entity, nuanced and elegant and ridiculous, who eats her bananas sliced with butterscotch, rather than mashed into baby food and fed to Enna Solla Pogirai. In a few years my sister will eat them soaked in rum, and she’ll think we won’t know her anymore, but we will.

For the woman who earned her name—Ammamma

And is startled in the doorway by the young man.

At once she gathers to boil black tea

And she smiles and remembers long ago.

Her guest was no one a week ago.

A small idea from calls in the kitchen

On telephone, while she set out biscuits and tea.

She hands a porcelain cup to the young man.

As he stares intently at the jars.

“Looks good,” he replies, like a girl months ago—

Her granddaughter, love of the young man.

There are fragrances and whistles in the kitchen.

To answer is her call as Ammamma

And to portion what’s left of the tea.

At dawn it seems far too early for tea

And for chakka, yet she opens up the jars

For daughters and granddaughters crowding the kitchen.

And once, years before, for another young man.

“Do you need any help?” asks the new young man.

He reaches for the kettle, pours out the tea,

And silence falls upon the kitchen.

The first help she’s had since years ago.

But here is another that calls her Ammamma

With a candor and smile from generations ago

And a taste for milk and sugar in tea.

She finds wrapping paper in the kitchen.

The young man sips his cup of tea,

Because he’s part of your life too, and in the time it’s taken for you to change hairstyles once and careers three times, to learn that high-waisted pants are better in theory than practice, to greatly respect those that can sit at a table and accomplish the mundane with duty and diligence, and to accept your curse as a writer, you realize he’s family. You love him for not the way he dries your tears or remembers that you like lavender scented body lotion or the that he loves the pachadi, but because he doesn’t excavate his sandwiches anymore. He eats them together, accepting the whole for its textures and tastes. You decide you can do the same.

Malavika Praseed graduated from the University of Notre Dame in 2017 with a degree in English and Pre-Health studies. She now lives in New York City and is studying for a Master’s Degree in Genetic Counseling at the Icahn School of Medicine at Mount Sinai, but writing is still very much part of her life, and always will be. “Fruit Salad” first appeared in Re: Visions.