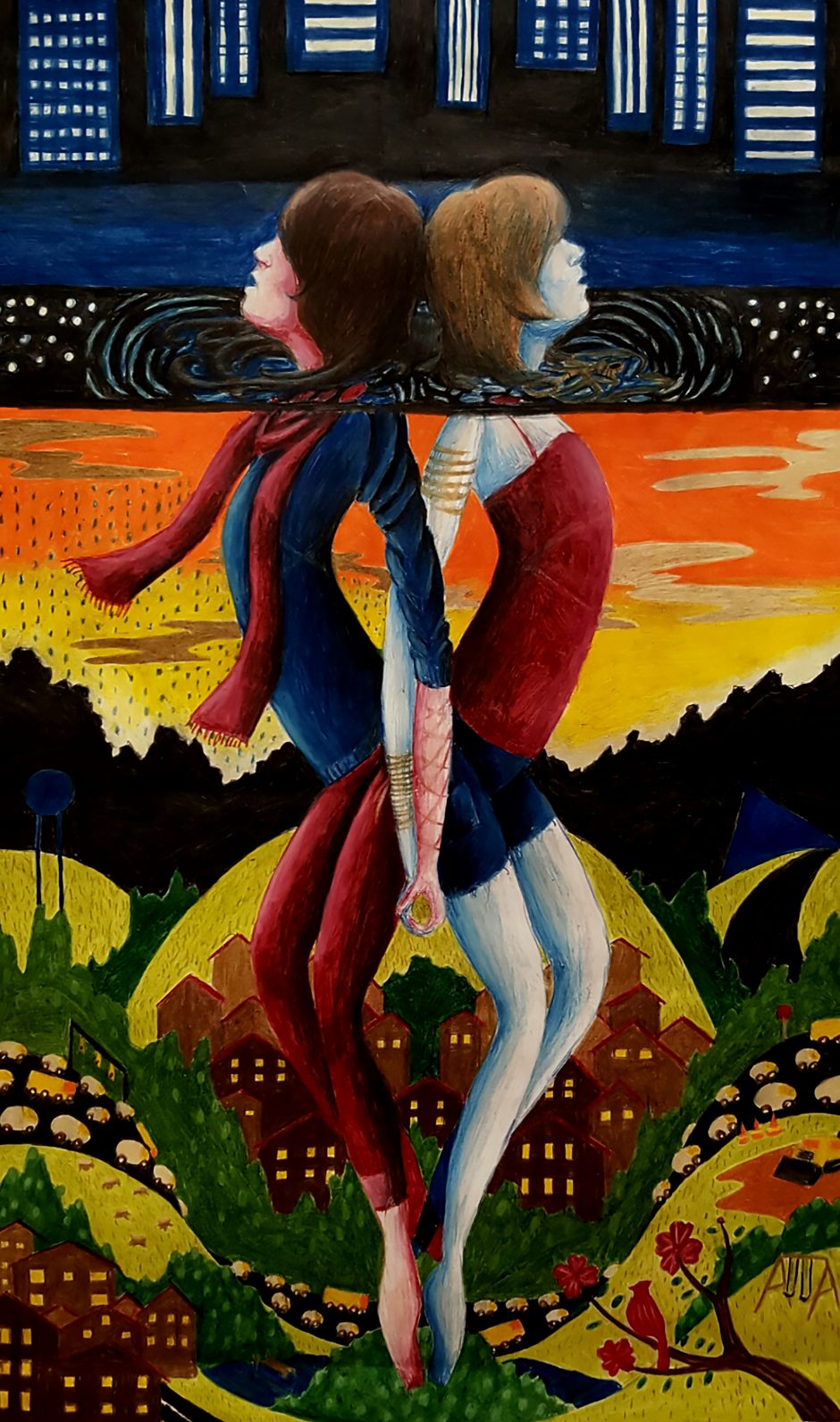 Two girls at a softball game. One with silky golden hair and one with red shoes. It’s one of their boyfriend’s games, one of those interchangeable boys—maybe he has long hair, maybe he has a nose ring, maybe he’s in a band, maybe he wants to be a chemist, maybe he loves her—it doesn’t matter. The girls don’t watch the game; they drink lots of water and sit on the ground with their legs crossed and talk about the horror film they’re writing—the one where a two-foot-tall Yoda doll kills their interchangeable boyfriend(s).

Two girls at a coffee shop. One with Adobe InDesign and one with a notebook and a pen. It’s a self-aware kind of coffee shop, with recovered wood tables and framed burlap coffee sacks on the walls and bearded baristas with endless banter and delicate tattoos up their arms behind the counter. The girls don’t do their homework; they drink too-expensive coffee and speak in soft conspiratorial voices about their futures— Costa Rica and fancy new laptops and pseudonyms and foreign grad programs and no babies!

Two girls on a porch swing. One with wine in a mug and one with beer in a can. It’s a party, but it’s really just a bunch of boys getting stoned on a couch and listening to boring jam bands and watching psychedelic YouTube videos. The girls retreat outside to talk about why this gross house is better than the last gross house these boys lived in; it has three floors and a loft and beautiful stained glass windows in the dining room and a gray cat named Wednesday. They swing their legs, back and forth, back and forth, and laugh defiantly with bared teeth into the night.

Two girls in a bar booth. One in a gray hat and one in a green skirt. It’s Halloween but neither is in costume—they dressed up over the weekend, as a martini and a Stephen King character—and they split a pitcher between the two of them and Ed, who went to get more quarters for the pool table. They say that they feel as though they’ve been ferried into another time period, one where the lighting is cozier and the beer is cheaper and life is simpler, where the pinball machine in the corner has relevancy, some modified ‘90s where there’s also a Buck Hunter game and the curly one can still use her smartphone to take a selfie in the window glare.

Two girls on a dock. One in her boyfriend’s T-shirt and one in her bra and underwear from the day before. They’re mad at each other, but they never say why. One is upset that the other didn’t wait for her to take acid the night before, leaving her alone at the height of the trip, and the other is upset that the one didn’t tell her she was coming to the North at all. They both pretend otherwise, and they hold hands as they jump into the freezing October lake. The girls scramble out and wrap a giant towel around both of their thin shaking bodies, smiling as the resentment dissolves, and they step lightly to avoid pine needles pricking the rough undersides of their summer feet on their way up to the house. The cool breeze through the trees whispers: It will never be as easy as it is right now again.

Brigid McBride was an English and Creative Writing student at the University of Minnesota- Twin Cities. She was published twice in Ivory Tower where “2 Girls” first appeared.