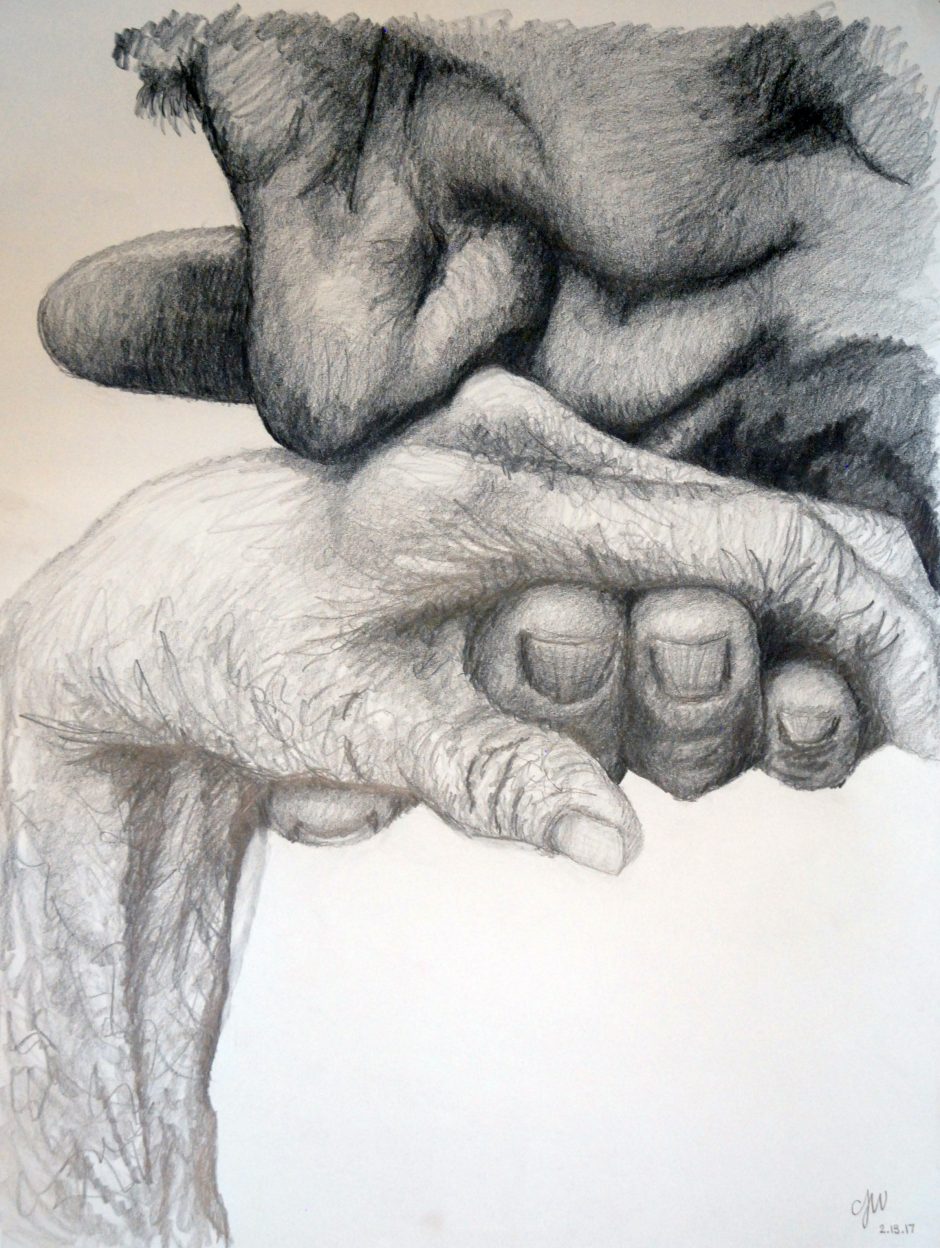 Grandma was squatting on a low stool in the stuffy bathroom, lit only with a window open to the traffic below and reeking of blood splashed over the tiles. In between her legs was a blue plastic tub, and in the tub was a half-naked chicken. Her hands worked efficiently, pinching and pulling the feathers from it. Pinch and pull, pinch and pull, like a humming engine. Without looking up from her work, she addressed me with, “Ay bie jin lai!” Don’t come in. I maneuvered my way past the feathers to peer into the tub.

“What are you doing?” I asked.

She smiled up at me; her teeth yellowed but still neat after all her years.

“I’m preparing dinner for tonight, what does it look like?”

I shifted over to her side to get a better look.

“Mind you, don’t trip on that cleaver.” She gestured to a foot behind me where the cleaver’s wet maw grinned in the sunlight.

I turned back to the chicken, oddly entranced by it. Its eyes squinted up at me and its beak was slightly open as if it wanted to say something. Its skin sported little red pinpricks where the feathers came out so that its entire back was quite prettily patterned. It looked rather at peace, as if it was receiving a massage at the salon beneath grandma’s biting nails.

“Where did you get this one?”

“It was on sale at the marketplace this morning. The seller tried to sell it to me for 70 yuan, the old fool, but of course I didn’t go for that. I talked him down to 40, I said, 40 or nothing!”

She leaned her head back and laughed, all her teeth showing. I smiled too. I thought about asking if she killed the chicken herself, like she always did when she still lived in the countryside.

When I was younger, I used to scream and moan each time she killed a bird. She’d go out back and pluck up the unlucky animal by its feet and carry it into the shed. I would amble behind her, clinging to her shirt, trying to dissuade her from ending its life. As she threaded the chicken to a rafter, I would stand in the doorway of the shed and berate her.

“Why does it have to die? How can you be so cruel?”

She’d only roll her eyes at me, not understanding the sympathy of children.

“It’s just a chicken. People die all the time, what’s the big deal about a chicken? At least its death will feed someone.”

Then she’d turn her back to me and swiftly decapitate it. The chicken’s blood swirled down, like ribbons, as smooth and shimmering as ichor. My face would swell up, red with tears and anger, crying and howling as if that could bring the chicken back to life. I remember thinking of my grandma as some sort of serial butcher, a villain that took her trade in murdering chickens. I would refuse to speak to her for the rest of the day, pointedly ignoring her questions and glances. Later, I’d eat her fresh chicken stew and fall asleep with its hot fullness in my belly. When I awoke the next morning, I would have forgotten the whole thing.

Grandma turned to me again. “Do you want to stand there or do you want to help? Go get that bucket for me, the one under the sink.” Her voice was authoritative.

I bent down for the bucket with little pink flowers on it.

“You want me to pick up the feathers?”

“No no, leave them, just bring the bucket over here.”

Swiveling around, she brandished the cleaver and made a cut across the chicken’s neck before pulling its head off. Her left hand firmly grasped the neck as her other hand reached into its body cavity. Its innards came slipping out like gold, flashing their redness into the flowered bucket. Making a satisfied humming noise, she told me, “It’s like birthing a baby, I tell you, sometimes it comes easy and sometimes it just won’t. This one was easy.”

I don’t understand how she can think of it like birth, when it smelled so much like death. I guess I can’t really tell because I’ve never been anywhere near a birth. It reminded me of when my grandfather died, and my aunt fanatically proclaimed it as “being born again.” I wonder if grandma had tried to believe the same. I can’t agree.

Because I saw them bundle him up in coarse white linens and put him on the conveyor belt. I saw the bundle slip into those shining metal jaws. I heard the fire swoon and rise as it engulfed his body, cleansing it until it returned to dust.

They gave him back to us in this tidy white box made of Styrofoam. My mom was adamant to let us know that my grandfather’s ashes weren’t actually touching the cheap Styrofoam—it was just encasing the fine ceramic urn where he actually resided. My dad commented that the cremators really should have been more respectful. I didn’t see how it made a difference which surface his dust touched. While everyone was forcing themselves to fill the silence with idle talk, Grandma sat on the bench. Not saying a word, just staring at this small Styrofoam box that held her husband.

When we visited his tomb on the mountain three years later, I was wearing a white dress. It was only slightly lighter than the joss paper we brought to burn, an antiquated tradition that symbolized giving money to the dead. The weeds had grown over the path up the mountain and my uncles had to use hand scythes to hack them away. When we finally hacked our way to his grave, all of my grandfather’s eight grandchildren lined up in order of gender and age to pay their respects. When it was my turn to go, I took 3 sticks of incense between my fingers—careful not to let the ash fall on skin—and bowed three times at the waist. As I stooped to stick the incense in the soil, the ash fell over my fingers and burned them. Instinctively, I wiped my hands on my white dress, streaking it with black.

After everyone had paid their respects, we stood in silence before that gray slab of stone as if awaiting judgment. My cousins were starting to twitch with impatience. I could see my uncle had already wandered off to smoke under a tree. Grandma continued to stack joss paper onto the fire. I watched as the thin sheets browned, blackened, and then collapsed into themselves as they dissolved into an ashy whiteness. The wind blew thick white billows of smoke towards me. I was terrified; it was as if my grandfather’s spirit was reaching to me through the writhing smoke, through a veil of death. Human life had never seemed so frail.

As everyone else began to descend the mountain, my mother lingered behind. She stood in front of my grandfather’s grave, diminutive and worn, trapped by the stony gaze of his portrait. I was standing behind her so I could only see the side of her face. Her mouth was wide open, hands splayed over it as if desperately trying to keep the grief in. She sobbed without a sound. She apologized for not visiting him more often, for not being there when he died. A cascading stream of “dui bu qi… ba, dui bu qi.” I’m sorry… Dad, I’m sorry.

I was shaken. This was a woman that I had seen cry on perhaps only two other occasions, a steel pillar of a woman I didn’t think capable of being broken down.

Trying to keep from staring at my mother’s vulnerability, my mind wandered back to the image of a fat wild hen we saw down in the village. It bobbed its head in a steady rhythm, a distinct confidence in its gait. Every so often, it would deftly pluck at something on the ground, speckled neck feathers glistening as it convulsed its throat muscles. It seemed to me that this chicken was physically vibrating with life. The dilation of its pupils, the inquisitive cock of its head, its elegant black legs, were all so animated. My mother kept saying sorry over and over again, but the words blew into the wind, as ephemeral and hollow as the ashes from the joss paper and incense. As I stood behind her, an inconsolable distance between us, I couldn’t help but think of the futility of it all. We could walk up this mountain every day, burn joss paper, bow, wail and apologize and he would still be dead. In that moment, it was as if my grandfather’s life and the hen’s life were equal.

When grandma was done eviscerating the chicken, she rose and washed her tidy fingers under the shower nozzle. The blood melted off and went from wine red to rosy pink to faint pink to nothing. She wiped her hands twice on her pants, palm and back, before picking up the chicken and carrying it off into the kitchen. I looked at the feathers, the blue plastic tub, the bloodied cleaver, the open window, and the tub of guts against the wall. The bathroom was strange without her presence, like the aftermath of a hurricane when all the people are gone and only piles of rubble remain. I thought back to Grandma sitting on the bench with a Styrofoam box in her hands, quiet.

Jennifer Fu is a sophomore English and Sociology student at Rice University. “Killing a Chicken” first appeared in The Rice Review.

Oh! Send Me a Postcard