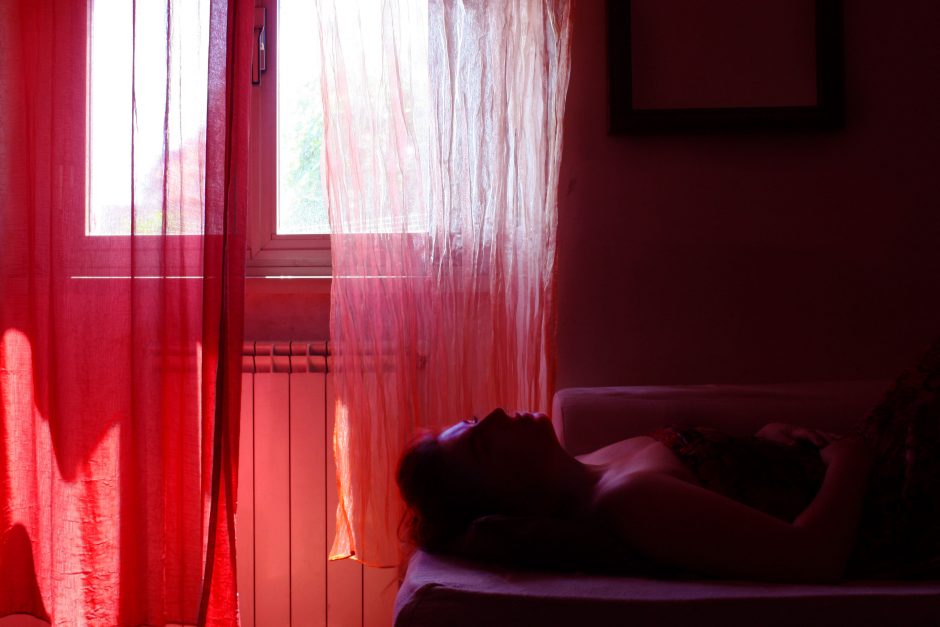 Rome is the City of Echoes, Gabe Montesanti

I hate my sister’s laugh.

Laugh isn’t really even the right word for it, not really. I guess you could call it

a cackle. Or a maniacal chortle?

I hear it most often in the middle of the night, when the whole house is silent. Then, out of the silence comes the insane symphony of delirium. I don’t know what she’s laughing about, but it must be funnier than anything I’ve ever known. Her lips are always cracked, the corners of her mouth split open from too wide a smile.

Sometimes, I hear her laughter echoing across the shimmering expanse of slick tiles decorating the condensated bathroom. There are no windows in the bathroom, and whenever she exits, the floor is sopping wet. By this time, my father has replaced the flooring four times but hasn’t changed a single bulb.If I were to look out into the hallway, which I don’t anymore, I would see that the lights were turned off, . After so many years I know where the laughter spawns from and nothing can squelch it.

I wonder why she’s afraid of the light.

Maybe she’s afraid of her reflection, since she doesn’t recognize herself anymore. Or maybe she’s afraid of all the voices that live across the folds in her gray matter, or the faces that bubbled up in her imbalanced brain chemicals. Maybe she’s disgusted by her body: the aged and cracked face she no longer recognizes, the bloated, cottage-cheese body. She was pretty once, but you’d never know it now. Sometimes I can’t even remember that far back.

But now the laughter isn’t coming from the dark space underneath the bathroom door, or through the walls in the stillness of 2:00 a.m., it’s spilling right out of her mouth at the kitchen table.

She’s wearing an old, stained, baggy T-shirt which advertised Station Casinos, “Where the Locals Go!” She can barely stuff the plate of pasta into her mouth because she’s laughing so hard. She tries anyway. Her laugh lines and crows feet don’t fade back into the tautness of her skin anymore. I’ve never seen her look so old.

I’m staring down at my plate, pushing my fried chicken around the edges of the blue-printed, china plate embellished with a lighthouse on a steep cliff. These were the nice plates, my favorite plates, which only came out when we were all out of paper plates and the plain plates were in the dishwasher. No one quite remembered where they came from, not even my mom. Next to me, my dad is sipping on his iced tea and chewing slowly. He presses his eyes shut and I can see the vein in his cheek ticking.

My brother sighs and sends me a pointed look. We’re thinking the same thing. We’re always thinking the same thing. It’s only a matter of time. We all pretend that everything is fine, that there’s nothing strange about dinner, but we all dread sitting down at the table. We dread the laughter, and the incessant whispers. We dread the way her lips constantly move, even as she’s shoveling food between her jaws.

I don’t look up as there is a clatter of fork being thrown onto plate. That’s enough for my father. “Look, I don’t know who the fuck you think you’re talking to, but they must be hilarious. Real life isn’t quite that funny.”

My dad doesn’t really speak to her. None of us really speak to her, except my mom. And Mom rarely ever got a response anyway. A few seconds pass. She has not noticed that anybody has spoken. My dad snaps his fingers in her face until she finally snaps her eyes over to him. She’s looking through him. None of us are even there. Wherever she is, her companions are much funnier, nicer, and generally more entertaining.

“What?” Her voice is high and trilly, like a little girl.

“Enough. Not this again.” My dad rolls his eyes and pushes back his chair from the table. He scrapes his plate into the garbage can and drops it in the sink. “You know, I’m about tired of this shit, Shanna. You need to get your ass out there and start looking for a job if you’re so certain there’s nothing wrong with you. Or, when you’re done thinking that this is normal behavior, you need to find yourself some fucking help. I can’t take this anymore.”

“Okay,” she says in that high, soft voice. It makes my skin crawl, to hear that pitch leave her cavernous mouth. My dad is convinced that there are multiple personalities manifesting behind her smile. Maybe it’s true. I don’t know all that much about them, but I hear the difference when she speaks to herself. Sometimes her voice is high and girlish, other times it’s raspy, occasionally deep, sometimes breathy, but mostly dull.

Now that Daddy has retreated up the stairs, my brother and I clear off our plates and do the dishes. Shanna sits at the table, laughing to herself. She whispers in a call-and-response, her eyes following us around the kitchen. She stands up, wipes her nose on the back of her hand, and opens up all the kitchen cabinets. She starts coughing her bronchitis-cough, flecks of spit collecting on the glasses, mugs, and platter dishes.

“Good thing everything is dirty,” I mutter to my brother, who is just standing in the center of the hardwood floor, his jaw clenched tightly shut, watching her move from cabinet to cabinet. My brother is a man now, tall and broad and angry, but even with all his experience dealing with Shanna, she tends to get the best of him. “Just leave it alone. Come on.”

“Is it wrong to want her dead?” I look over at my brother, a smile tugging at the corner of my mouth, but it fades when I see the intensity in his eyes. We both have our dad’s eyes, blue with bits of green. Staring into his eyes was like seeing into my own soul. Sometimes I was surprised how much of what I couldn’t say stared back. I shake my head and he continues, “I think we’d all be better off if she were dead.”

I swallow. I haven’t told anybody about the things I asked for in the middle of the night every time her laughter woke me from another nightmare. “Sometimes,” I begin, but stop. I’m afraid to say it, worried about what saying it aloud would mean. I considered myself a good person, but if I admit that I think about murdering my sister, doesn’t that make me a bad person?

“Sometimes I pray that she’s dead when I wake up. Sometimes, I lay there and I think about the thousands of dollars she stole from Papa, and you know that’s why he gave up, and I wish with everything I can muster that she won’t wake up again.”

My brother is quiet for a few seconds, just nodding at me. I can see myself reflected in his irises and I’m ashamed of the way I fidget. He does not judge me.

I nod, and we don’t say anything because the change in our family was obvious. My parents have been madly in love since before I was even born. Now they fought all the time, in hushed whispers and behind closed doors, but the house had ears and there were never any secrets. Our parents were soulmates, but Shanna was about to tear them apart, as she had always hoped. “It’s not fair that he’s dead and she caused it and she didn’t even have the balls to show up to the funeral.”

My eyes are bubbling up again and I swallow to keep my voice steady. “I’ll never forgive her for that.” It hurts to talk about Papa. Through the window, we can see that she’s moved onto the drawers, coughing on all the silverware and knives. I roll my eyes and look over at my brother. He is smiling sadly.

“If it wouldn’t hurt Mom so bad, I’d kill her myself.”

We both smile, because that’s the reason any of us put up with the shit we put up with. For Mom. She was the best mother in the world to us. Somehow, she always came through when we needed her. My dad dealt with Shanna because he loved my mom too much to leave. My brother and I dealt with Shanna because we loved our Mother and if this was the sacrifice she called for, this was the sacrifice she deserved.

Gabe Montesanti is an MFA writing student at Washington University in St.Louis. She studied studio art and mathematics at Kalamazoo College in Michigan, and she completed her senior thesis in Rome. The project, a hybrid of visual and written work- received honors from the college. Her writing and art can be found in Word Riot, Crab Creek Review, Devil’s Lake, and elsewhere. “Rome is the city of Echoes” first appeared in Blueshift Journal.
0
← Previous Post