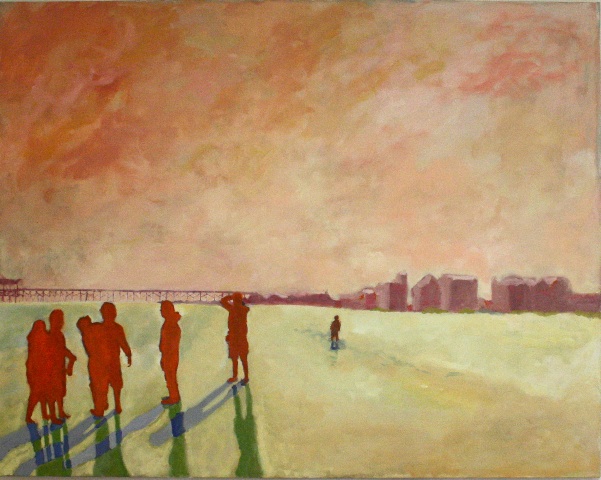 An hour west toward the beginning of Long Island

we drive to a party in Hicksville. We pass a series of one-story houses.

Airplanes, coming or going, chase the birds from the sky.

A blue hydrangea blocks the back porch, where

the hosts are wide-eyed on coke and their mother

too long when I speak. A. unpacks his keyboard case

and I find a lounge chair, buy a beer, and break mosquitos open

against my legs. I should stop eating sugar. I am tired

of the grotesque blood-suck-burst.  My boyfriend

does not attract mosquitos, only women.

He was born without wisdom teeth or myopia.

I am primitive with childbearing hips, peasant hands.

Hours pass, as they should, on time.

In the bathroom boys divide $100 worth of cocaine.

“What’s she doing in here?” the longhaired boy whispers,

fishing a bottle of absinthe from the freezer.

People drinking absinthe are boring in their need

to be acknowledged. He will talk about it for the rest of the night.

“I’m waiting for the bathroom.” He is startled that I heard him.

Still he takes me aside to tell me about my boyfriend’s talent.

“Hold on to him, he’ll be famous.” The glow of the infomercial

His brother is purported to be a professional pickup artist.

On the lawn I sit down with the pickup artist; he offers a blanket,

asks if I like his band.  A. takes down a girl’s number.

“I liked the Neil Young cover,” I say because it’s half true.

He’s speedy and feels like talking. “Smell my hair.

It’s women’s shampoo, you know why?

Because girls are territorial, and they’re more attracted to a man

if they smell a woman on him.” “That sounds like bullshit,” I say.

“It’s true.  You know what else?”—he doles out innocuous secrets

because I don’t matter to him. “Fear makes a girl more attracted

to the guy she’s with.  So that’s why you should take a girl

to a scary movie, or on a rollercoaster.”

“Alright, pheromones,” I allow and A. returns

to tap my shoulder.  By midnight we drop the rest of the band

at the LIRR station, to deliver them to the city.

lightheaded in a way I can’t identify,

“I think there’s something wrong, but I might just be imagining it,”

which is a problem for me always. The diner was voted best

two eggs over easy and fries. Abruptly A. says “That girl wants

to go to my shows. She lives in Queens—she likes my brother, anyway.”

“I wouldn’t flirt with a girl right in front of you.”

He asks who I was talking to earlier and I say a very sober boy,

who asked pointedly what I do. I shrugged write,

and he guessed poetry —then ventured, I bet you have a special place

where you write, like by a window overlooking a lake.

No, I said recoiling. A. tells me, “I can imagine you’re impossible

the word flirt with its awkward phonetics,

of consonants. He cuts the waffle with a fork; he never worries

someone could take me from him.  I’m not stoned

from the downwind of a blunt, only sickened

by my sister’s perfume on the cardigan pulled out of the hamper.

Victoria’s Secret is a poisonous vanilla. For fifty miles we pass

deer grazing on the Sunrise.  I hate them for their stupidity.

They wait to be harmed like a lesson in repetition.

Junior Sophie Treppendahl studies studio art and business. She will continue pursuing uninhibited creativity and sincere color wherever and in whatever form comes next. You can find her ideas and images here.