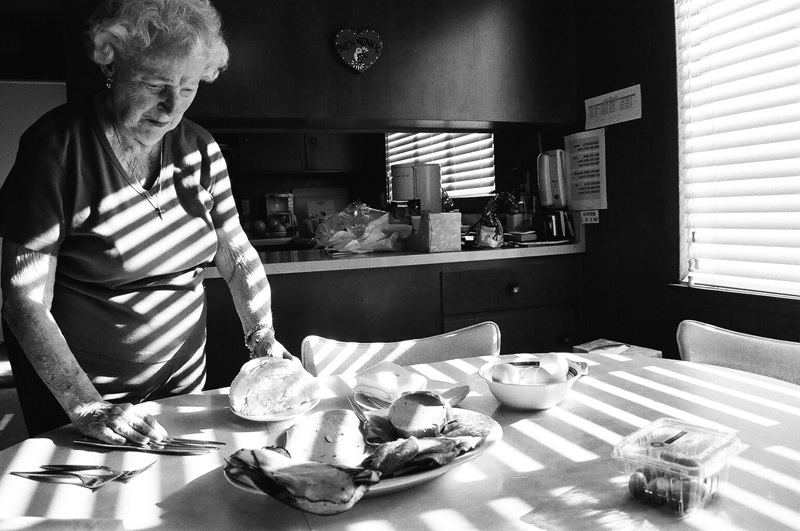 As children, we worshipped Home, wild and reckless. Armed with markers and crayons, we scribbled manic hieroglyphs on its canvas walls. Relished the soft, flowing pressure of our graffiti.

In the kitchen, like a Norman-Rockwell B-side, we climbed onto each other’s shoulders, toppled over cookie jars and turned our Home into a den of robbers. Ran away with the nervous excitement of house mice, height a combined wobble, a tower of crumb-flecked babble.

But when night fell, and every awful thing creaked our floorboards and tapped our windowpanes, we threw blankets over our heads and let our little lips pray.

We ran home when the kids said mean things, when dead birds on the sidewalk upset us; and when our skin splintered on the old cracked porch, we felt betrayed by our stupid pink foot-stubs, never the home we ran into. The home whose address felt as real as words like roots or soft.

And for a while there, it was downright Eden. Our mother in the garden charming snakes out of the tomato patch, father on the steps drinking from aluminum cans, loving her sundress flow. All the while we were tucked into our favorite hiding places, laughing in ranges somewhere between flute and kazoo.

Then we grew into adolescents, and tore down stairs like heretics, leapt the last three to get, even faster, to our automobiles. Curfews surfaced on the skin of our home and the place became a sentencing rather than a comfort. “I hate this house,” we shouted, with twisted faces and purple emotion, our fleeing bodies a cartoon streak out the pie-tin-slam of the front screen door.

Then came the exodus—to school, to work, across state lines and over seas. Home became a photo-album thing, next to our children-bodies and the “when Mom was pretty” rectangles.

We meant to return home. Distance made us nostalgic. But we had our exciting distractions: our cigarettes and our music, our fine-featured friends, adult and exciting with their ideas and complications. We found sex. We found it repeatedly: in the cupboards by the coffee beans, in the rustle of leaves in the streets, in the up-and-down bob of a lonely body waiting, there in the cold, for some bus or train. All objects, all sounds, all roads led back to bed with that golden one, now so far away. And what chance did Home have there? It became a piece of motel art left too long in the sun, faded. We visited on holidays, and kept a casual observance of our past addresses.

But it couldn’t keep like this forever. Even the most beautiful line about shoring fragments against your ruins feels stupid with a bus ticket in your hand and an old, familiar bed waiting. Because you get to the point where the bottom drops out, where “I’m lonely” pops from your lips, a kind of loneliness you can’t patch over with friends or activity or frenzy. Eventually, everyone goes to his own sleep, and in even the fullest theater, everyone is looking forward. Sometimes you just want to go where everybody knows, but doesn’t need to use, your name. They know your weight on the front stairs, the jingle of your keys; they know as soon as you’re inside you’ll leave your shoes anywhere and head straight for milk in the fridge. All that plays inverted on your eyelids, projected upwards from the pinhole in your heart that formed in the tiny moment of despair before you raised sails and threw up your hands, converted anew, ready again, for home.

This comfort proved wonderful, and short. Because we became the adults and architects our parents were, and the anxious pressure to get a foothold in the world gave Home a clear voice we dutifully followed.

Home said, “Build me a house in which to worship. Make a yard 40 cubits in length, dutifully maintained and weed-whacked. Plant perennials by the porches and come fall, sacrifice the afternoon of your first-born son, the one you love, to clear branches and rake leaves while everyone else is at the mall, or the gas station, or at Jenny’s.”

This done, Home said, “You shall have no other habitations before me.” But still, we stayed in uncomfortable hotel rooms, brought back false idols of plush, white towels and small containers of hair conditioner and shampoo. Home is a jealous god and when we go off camping it will not bring in the mail or stop the drip of the kitchen sink.

We should not use the name Home in vain, but still, when visiting friends for dinner parties it will only seem right to compliment their living space. “Oh, my. It’s lovely. Much better than my place.”

But Home isn’t powerless, and for our insolence, it will send heat waves when the air conditioner breaks, it will send floods after we pass on including water-damage on our insurance forms; it will send plagues of ants or mice or bedbugs, just when we most need the basic, wonderful luxury of being horizontal for a while in all this gravity, with always its pull, its pull, its pull. We’ll leap up scratching, angry as hell, and curse the house until the affliction passes.

But Home is also benevolent, which is why we worship it to begin with. Home will give us warm stoves in cold winters, robins will perch on our windows in the spring; on Wednesdays when we become fed up with everything, we’ll stay home and, flirting in rooms, we will be fruitful and multiply. Summers, we’ll sit out and listen to the crickets that sing in their brown casings until the stars come out. We’ll smile at our mailbox, make pleasant twists of doorknobs and palms and get excited about words like mulch. We’ll count our blessings and fry our eggs. We’ll have coffee, and laughter, and miracles. Miracles like, “Be home in ten.” “Be home late.” See you at Home, oh home, home, home: hallowed be the name.

For a while, at least. But worshippers grow weary, and days are just so long.

And home will sit uncelebrated, unblasphemed, unanythinged. If it still had voice to speak, it might sigh into itself. It might think about how it was once adored, and is now just a doorway people haunt but never pass through. It might tip its hat to the mail carrier. It might smile at birds. But it won’t. It won’t do anything but grow weeds and gather dust.

For a while there it was Eden. But then we let the trees grow. We let the shingles slide. The gutters filled with dirt. By now we’d moved out: on. New phone numbers, zip codes.

But as this all draws to an end, know that there will be that night, that night when you wake up, room full of blue, and drive back to that old house, still empty. Your old key might have worked if you’d kept it, but it’s gone, so you’ll climb through the window. You’ll walk to the center of the living room—like a museum, without any furniture. Maybe you’ll cry, maybe not. Most likely, you’ll lower yourself to the floor, as in ritual, and spread out on your back, allowing your fingertips to move like threshers through the carpet. Eyes shut, open; one breath in and out and you’ll say it—I lived here.

Rich Hoyt studied English with a focus in creative writing. He is based in Boston. “Alphahomega” first appeared in Boston College’s literary journal, Stylus.

Allison Arkush is a student at NYU Gallatin focusing on the visual arts. She works in a range of media, from photography to sculpture to painting to metal crafts. Her photograph first appeared in NYU’s West 10th Review. Allison can be reached via email at [email protected]