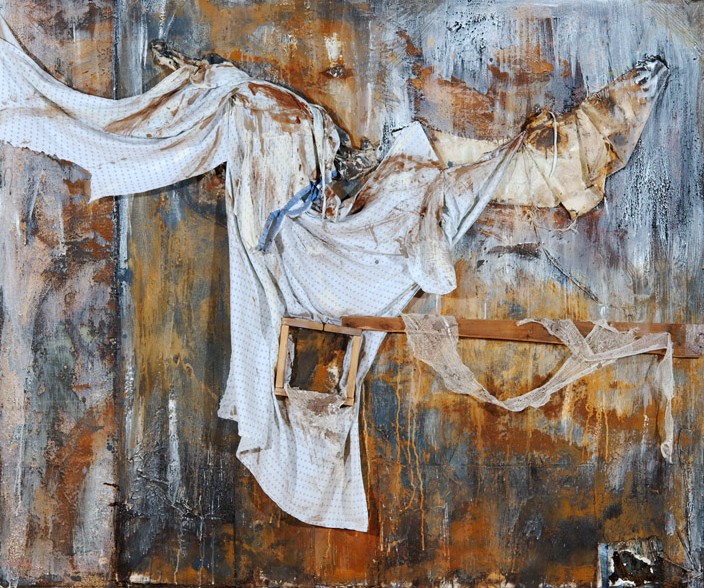 I stored the wings in the garage because your body

catapulted away so suddenly I was almost sucked in, too.

as lapis lazuli (the correct word is azure, but you never

knew that color, being content with the generic), the

pictures were so beautiful no one could think seriously

sutured the air to his flesh.

In this story, you are painting me. The last of a dozen

times, the first being my birth when your daughter

lent me to you for ten seconds. In your hands,

I developed consciousness, for my body must have

grazed the blanket and felt, even then, that this great

immense world is no bigger than what I could touch.

I bring you water; you look outside and my eyes follow

earth beyond the city. The images I’ve stashed away

I almost went to war, you said,

but I became an engineer instead.

I imagine you, bent over a blueprint,

of bombs. A Daedalus in the

survived because you were starving.

On lonely nights in Fuzhou, the air draped with organza stars

substance but tea poured straight from the kettle, resin evaporating

from amber mats and the littered halves of sunflower seeds)

you build those wings again and again. Feathers from geese in

Guangzhou, saplings from a yard not yet yours, twine

from braids of children and grandchildren, tokens asking

for your love. You worked diligently from your bed,

until hundreds of these wings lived in the room, leaning against

walls and shuddering on the floor, some large, some small,

some feathered in radiant hues, some dark enough to eat light,

some leathered like dragon wings, some made entirely of dew and mist,

some strung with double wings, some with hidden knives,

some open, some folded, some indented like ears, some with

In the hospital room,

I wonder if it’s you or they I’m seeing.

Ma ma is straightforward in Chinese.

As Icarus fell, Daedalus saw through his son’s eyes,

My tongue quivered against the roof

I dab your mouth with a wet rag the texture of

shaved lichen. This is where the metaphor breaks down.

You who wheeled me on tricycles, read to me

in thunderstorms, are watching me watch you die.

A kilometer or so from here is a thermos you haven’t washed,

a tub of pickled radishes soaking for the New Year.

That boy on the street

is buying some gum.

He couldn’t be older

than I was when I

You kept a garden in your apartment, urns with assorted plants.

You believed that three-leaf clovers were lucky because

I had told you so.

His bicycle is red,

was new, it must have

No story translates into this, the protagonist

seeing himself through his child’s eyes,

falling away from the body he had held

and the wings on it. Icarus, grandfather,

reclined in a plotless room with windows,

dreaming of Canton or Fuzhou

or his thermos, green and surprisingly heavy.

His dreams do not need to be translated.

He is my translation.

A molecular biology major and creative writing minor, Ting Gou served as the co-editor-in-chief of the Nassau Literary Review from 2009 to 2011. She currently teaches eighth-grade science in a city near Atlanta.

Samantha Burns received her BFA at the University of Tampa in painting and photography. Currently studying for her MFA at Florida State University, she is an expressionist painter who explores experimental materials and processes in her works. For more information, visit Samantha’s website.