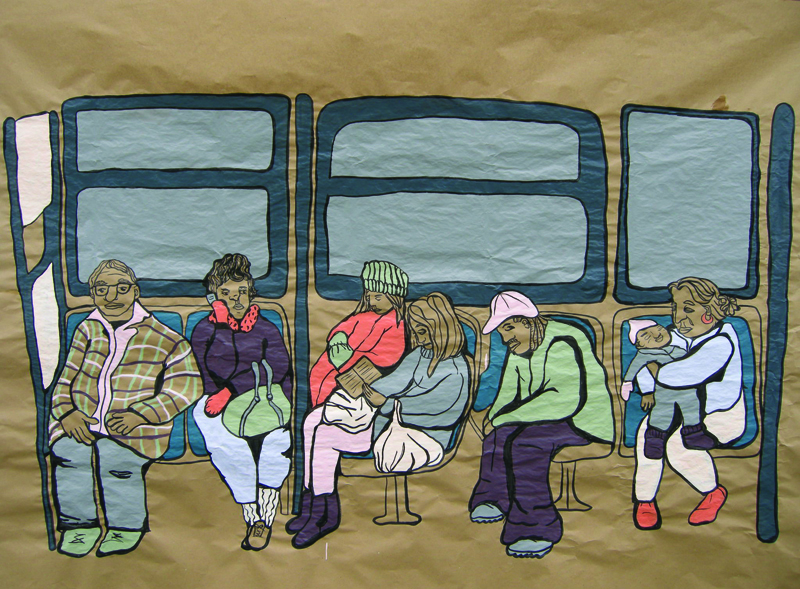 Ever since we marched with tube socks and Trapper Keepers into kindergarten, we have been urged to be who we want to be, to invent, to impress, to remember that the sky is the limit (for even if we miss the moon, we’ll land among the stars—or something like that).

On airplanes, should my neighbor insist upon sharing some sort of conversational bonding, I leave him thinking he’s struck gold by the time we say our amiable good-byes at the gate. There is something beautiful about how little consequence is tacked to the lies you tell to strangers. You can be an ass, a pervert, a prodigy, a princess, an orphan, a psychic, an idiot savant, a hero, an addict, for two hours, five hours, layovers, delays, turbulence, and landings. I have been a Harvard freshman en route to her solo premiere at Carnegie Hall, a deaf girl with an impeccable ability to read lips, Roald Dahl’s slow granddaughter, a millionaire, a paranoid schizophrenic, and that girl whose mother was consumed by her boa constrictor—you may have heard about it on the news. And then it’s over, everything whitewashed, just a memory for some loquacious executive who will have a killer story to weave at his dinner table.

Look, I don’t want you to think I am a liar, because there is a big difference between lying to someone you’ll likely see another time and sculpting some wild or touching or jarring masterpiece for a stranger. To routinely do the first requires a better memory and worse esteem than I have. There is jealousy, or at least insecurity in the habitual liar. Her tricks are inevitably trapped in conflicting webs until she can’t open her mouth around anyone without getting a raised eyebrow. To do the second, though, is merely a harmless and endlessly exhilarating game of imagination. Here is a loophole in the teachings of honesty. To the phocine bride in the aisle seat on a plane to Boston, I am on my way to meet my future husband, the tragic result of a familial tradition of arranged marriages constructed by my converted-Hindu guru parents. (“I should be grateful I haven’t had it as bad as my sister Priyanka, who got fixed with a chain-smoking homosexual suffering from an allergic reaction to sunlight.”) And later, while my friend seated in the aisle snores with her fat fingers locked on her lap, I am nudged by a bony teenager with dried acne meds on the creases of her red brow, sitting in the neighboring window seat. She wants to know if I listen to Korn. I want to know what she thinks my chances are of finding true love on the set of MTV’s Real World: Boston, where I’m headed. She says they’re high as long as I keep the drama to a minimum and my hair straightened. She gives me her number in case I need someone to call from the set (I fold the paper and stuff it into my pocket gratefully) and asks me to autograph her plane ticket.

Maybe I should mention that I have had a rather intense fear of flying and most methods of transportation in general, ever since a plane I boarded from Washington to Providence had to make an emergency landing just after take-off. The problem turned out to be a harmless issue related to the air-conditioning system, but there I was, behind an eight-months’ pregnant woman, sliding out of an airplane onto a private runway in New Jersey with a face as pale as recycled air. I remember saying, “I love you,” or something equally inspired, to the stranger next to me a few times before we touched down; it is certainly the closest I have felt to death.

As a rule, I steer clear of talking to religious nuts, white supremacists, pubescent children, garrulous old men, or city hipsters—in general, bad listeners. Should anyone from this crowd try to strike up a conversation, I usually assume the role of narcoleptic or mute. I do, however, welcome grandmothers, Republicans, potheads, heavy accents, midlife crises, black lipstick, vegans, musicians, and politicians, for the most promising discussions about photographic memory or being an ex-gay or having a heart transplant.

I recently took a train to Montreal, and quickly found I had done an exceptionally poor job of choosing my seat. To my right sat the alleged score composer of Oliver Stone’s first film, an ancient man with a love for the jazz violin and a slow-moving MacBook Pro. Behind me was a teenaged thug with a buzz-cut on his way back to Long Island (“The City”) to see his baby and his baby-mama. Happily, Middlebury College had agreed to give him a two-week personal leave, which he admitted was generous, but boy would he miss that Vermont kush. He showed me four of his five tattoos (to show the fifth would have been indecent) and asked if I could tell that he had had trouble with the “killer clown” on his calf scabbing over. Ahead of me, three graying Canadian women who appeared to be on some sort of Ya-Ya Sisterhood adventure via Amtrak began loudly discussing their own poetry, artwork, and husbands (whom I can only imagine to be poor, helpless, and endlessly regretful creatures). One of the poets smartly disclosed that her work was better than Leonard Cohen’s—whoever that is—while the other two giggled, and tossed their hair at the grumpy Customs agent, who asked about the purpose of their travels with such resignation that I almost second-guessed my decision to answer, when he asked me the same, “I have fallen madly in love with my sister’s fiancé, and I’m on my way to break up what will surely be a short, unhappy marriage.”  He took my passport and ticket and chuckled, “Bless you.” I thanked him and he handed back my forms. He said, “Boy, do I got stories to tell.”

Eve Gleichman is a student at Haverford College in Just Outside, Philadelphia. She was born and raised in Just Outside, DC. Of her piece, “The Things I Have Been,” she says, “I guess if this had to be about one thing, it would be about the moment you realize that shock value comes more from truth than from fiction.” “The Things I Have Been” was originally published in The Haverford Review.

Emily Gray Tarelia of Bennington College loves handmade things, cooking, sharing, families, relationship, and the ways in which these topics are changing and evolving right now; she is also from New Jersey.

Twilight of the Libraries