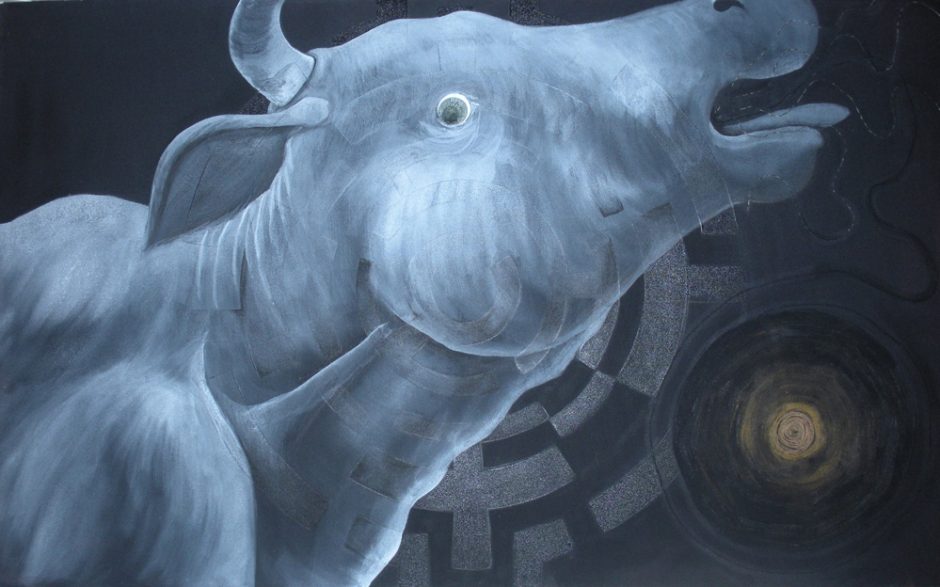 An orange glow around a corner—sometimes a Christmas tree in a darkened room by a bookcase and a sofa, sometimes the stained-glass lamp that Jessica left along with the stolen Nativity Christ and a microwave. My eyes are smarting.

I bring Jessica a bag of Starburst candies. I hold them up near my shoulder, as if I’m gesturing with them. Her kidney function has nose-dived over the past couple of months, and she’s been spending most of her time in bed. The candy, I reason, should make her feel better. She opens the door and stands to the side. Arturo, her boyfriend, is there, his hands in his back pockets. She isn’t happy to see the bag of sweets, and says something along the lines of, “We already have way too much candy,” indicating a large pile of packaged Hershey Kisses, Andes mints, Dum-Dums, Blow Pops, maybe hundreds of unwanted bags of grade-school candy. They are stacked hastily, about navel-height, pushed against a wall. I look back to see the bag of Starbursts in Jess’s hands is now empty. The Starbursts have disappeared somehow, sublimated through the clear and yellow bag and diffused through the air like spoken words. Jess doesn’t seem to have noticed. She is preoccupied, frowning and looking behind her.

The list is a small slip of paper with maybe five names on it, written with red ink in my least uneven cursive. I keep it hidden in my bedroom where only I can see it—the plan is to look at it every night before I go to sleep. It is a solemn, childish ritual—one of many I invent and discard over the years.

When I lie with my ear against the mattress, I hear an even thudding that sounds like lines of soldiers marching in unison. The longer I listen, the louder this sound gets, which gives me the impression that the soldiers are nearing. These thuds do not synchronize with my heartbeats.

Theft of a Sacred Artifact

I am locked into a chair and cannot free myself. There are pine trees as thin as forearms both on my right and left. There are bright refineries at the end of long, straight paths. My legs hurt and are restless, and I call out for my mother and father to unbuckle me, but they do not understand. They ignore me until it no longer matters.

My dorm has an atrium-style quad, and when I go out to get the mail I look down and see Mee-Young’s name scorched in the grass. This is how I know she is dead: her name is burnt into the grass, in enormous block letters. I start bawling in a way I haven’t since I was a child, howling and gulping and shuddering. I can barely stand upright, and as I stagger across the balcony to the elevator I have to support myself on the banister. I see friends and acquaintances sitting on Adirondack chairs outside their rooms or chatting near the stairs, and I have to stop and make small talk, even though I am weeping so violently I have trouble forming words. I am ashamed to be seen in such a state, but I have no choice, because it is vitally important that I go downstairs and get the mail.

The dogs slated to be euthanized are kept in the clinic’s sterile, well-lit basement. I watch them from the stairway leading down—a large, rowdy pack of dogs of all breeds and sizes, corralled into the far half of the room by a grate. The gas is fast-acting, and as it fills the room the dogs roll over one by one, snuffed out instantaneously. The cloud of fumes begins to waft in my direction, and I watch its lazy, expansive approach. The gas is odorless, but I know I am already inhaling traces of it.

I check my email in bed. The subject line reads “News about Barret.”

When we stand on the carpeted porch area outside the schoolhouse, he is wearing a yellow soccer shirt inside out. I can see the fringe of hems around his shoulders and the tag at the base of his skull. I ask him why, and he doesn’t have a reason, but he doesn’t seem to need a reason either. We stand now on a sloped driveway—he leans on a garage door, or is standing right in front of it. His arms are crossed, and then in his pockets. The sun is setting. It takes about five seconds for the email to load.

After I read the email, I go to class and chat with Kori and Sam. I come back to the apartment, and then skip my afternoon class to walk south, over the river, to the Jardin du Luxembourg. I sit by the fountain and read a book of poetry I bought a few days before—The Spoon River Anthology. Back at the flat I see my home-stay mother, and I try to tell to her what happened, but my vocabulary fails me and I become so flustered as to be incomprehensible. I have particular difficulty explaining that it wasn’t a motorized bicycle, or a motor scooter, but a motorcycle. I spend the next two days in bed.

Temptations of the Underworld Resisted

I walk toward the horizon until my head is underwater and I have to bounce counterpoint to the wave crests. A teenage boy I’ve never met grabs me by the arm and pulls me toward the shore, and I am disoriented. My father, wading, scolds me.

Temptations of the Underworld Resisted (2)

A beer bottle breaks against a storefront, and the police rush back toward me. I hide beside a little white kiosk that sells chewing gum and newspapers by day. On the street, the police are throwing flares and I hear loud, resonating booms—offensive and unexpected each time. The fire-cracker haze is tear gas, but I do not realize this yet—the police are firing shots; I assume they aren’t bullets. A boy darts in front of me, trying to pitch a trash-bin at the riot squad but only managing to strew paper waste. I hoist myself over a plywood fence, as tall as I am, into a sandy construction zone and stagger a bit. There are holes in my shoes, grit in my socks, and a hot air balloon expanding indefinitely in my chest.

Temptations of the Underworld Resisted (3)

My father holds me upside down and shakes me until I spit the quarter out.

I sit on a mildewed sofa on a balcony and a young man with a very hip haircut tells me about illegal betting in Macedonia—how several months’ salaries are won and lost based on a soccer match. There are dogfights too. Opera is being played from an open window somewhere, and I let the Macedonian talk. There are no more obligations now—not to the future generations, not to the neighbors, not to the poor, not to the trees, not to my family, not to myself. Freed from these ties, the soul expands into a shamanistic mountain and detaches, wafting into space.

I am a clumsy child, and I keep getting in my mother’s way as I hover around her in the kitchen. I shake the eggs before she breaks them. I wait to see if the yolks are intact.

I stand by the side of the little airplane while Will crouches under the wings, jostling the ailerons and looking at their hinges. We have driven out to a general aviation airport, where airplanes are parked like tractors behind a tiny office. He checks under a wing and shows me a little clear jug with a bit of blue-tinted liquid in it. He tells me that if dirt gets into a car’s fuel supply and the car cuts out on the road, it isn’t a huge deal—that engine failure in the air is much worse. He pours the clean fuel back into the wing through a round hole on top and then screws the cap back on.

The take-off is a little shaky—remembering kites, I am always afraid the wind will change and the still-accelerating airplane will hesitate and fall. The airplane bucks right and then left within the first few seconds of lift, and I am frightened and annoyed.

The day is gloomy and almost overcast. Above the clouds, of course, the sun is shining beautifully and the sky is clear. Jessica’s transplant went well, and in an hour’s time we will be visiting her in the hospital.

The plane lingers over the cover of the fluffier layer of clouds for a little while. They look discrete, well-formed, even up close. Looking behind and below us, I can see the airplane’s speck of a shadow on top of cumulous clouds, a black dot surrounded by a rainbow halo. The headset is staticky, and I hum to myself over the droning. I had recently been listening to “The Rainbow Connection” on Youtube quite a bit—not the Kermit version, but the video with a skeletal Karen Carpenter in a white dress sitting in a chair singing, hands in her lap.

Somewhere in the hilly desert near the Mexican border, we have a flat tire. We still have the gun, but we’d shot out all the bullets into the plains by the ghost town. Will, Arturo, and I get out to change the tire. Jessica stays in the Tahoe and plays Pokémon. The spare wheel isn’t in the trunk but attached to the undercarriage, and retrieving it involves difficult machinations with a telescoping hook. The men crouch and take turns working to disengage the spare. Jess leans into one of the windows and makes an ugly face. She holds it long enough for Will to take a picture.

Albert has to work on a project on the novels of Milan Kundera, so I am left for the day to my own devices. I walk toward the endless metronome and past the brass sculptures of fragmented men. This is the only nice day, and I go by the river and look at the dead fish and skip stones, and blow dandelions in the gardens around the city.

I emerge and ask my home-stay sister, who is eating bread and honey in the kitchen, if I can have some headache medicine. I eat some toasted bread and jam, leaning the whole time over the plate, and as I get up to leave, she says, “Bon courage.“

I think at first that I’ve misheard her. It has never before occurred to me that grief’s antidote could be bravery.

Alexander Crompton is from Bayou La Batre, Alabama, and graduated in 2009 from Rice University in Houston. He currently lives in Altkirch, France, where he enjoys chicory coffee, Penguin Popular Classics, and a twelve-hour workweek. “Folktale” was originally published in R2 The Rice Review.