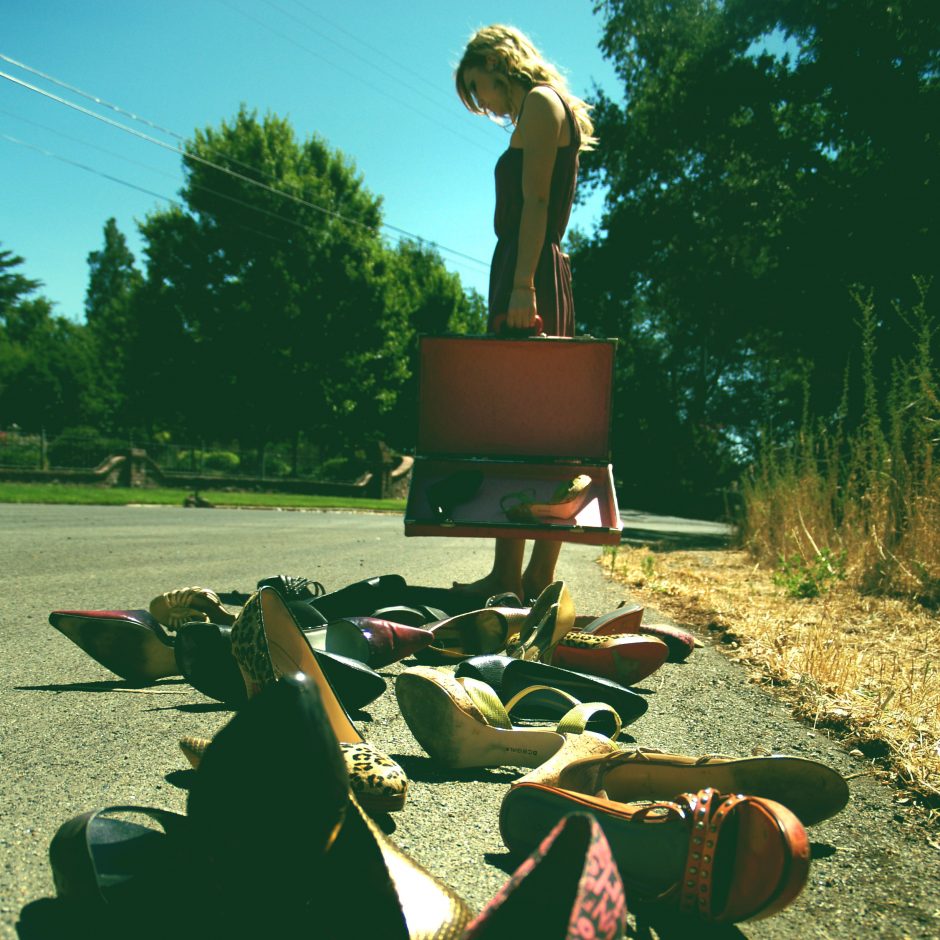 The rehearsal dinner is at the Red Top Restaurant. We sit at three tables they had pushed together. Each place already has an ice water and the waitresses wait at either end with their hands in their aprons while their nametags droop from their faded red shirts engraved with Red Top in gold thread.

“Tessie, why don’t you switch. Here.”

My mom is patting my thigh. I get up. I am now next to Anne. She has put a denim jacket over her spaghetti straps and she is leaning over the glasses and the pepper flakes to talk to my brother.

“I want a strawberry daiquiri,” she half whispers.

“Go ahead, honey.” Max is scanning the available beers.

“What are you getting?” She puts a finger on the menu and tips it her way. He looks up.

I look at her feet—very small, with a ring on the right middle toe. They are bent and supporting her thick white calves, her knees almost covered by her denim skirt. Max is looking at her read his menu upside down.

He still has my nose. When I was in seventh grade, he was a junior in high school and on the weekdays after school he worked at Falley’s Food Mart every day except Fridays and Mondays. On those days he would leave a note on the front door and drive to Wakefield, three hours away, where my grandpa lived in a big stucco house by himself. Max left his books next to the TV and shoved his backpack full of Folgers cans of dirt and worms and went fishing in Wakefield Reservoir. Sometimes he hunted small animals with his pellet gun all weekend in the acres around Wakefield and most of the time my grandpa didn’t know he was there and only found out because the shower was running when he came back from picking thistles in the pasture.

The first time I brought him a microwave burrito for his dinner break at Falley’s, a girl named Whitney took it from me because she knew it was for Max. How did she know, I asked. She said we had the same nose and walked over the microphone and called his name. He came out from the canned soup aisle and took the paper bag from Whitney and never looked at me.

“Ask Anne what shows she’s done.” My mom fingers her earrings and smiles close to my face.

Anne’s face is sucking on a straw from her daiquiri. Max is telling stories about the stupid, old people at he had to give customer service to when he worked at Walmart. He is wearing a periwinkle blue polo that was too small for my dad and walking with his fingers across the table and making the voice of an old person.

“Did you do any fun shows in college?” I ask Anne.

“Hm,” she says and leans, with her lips still folded over her straw, watching Max. I begin to repeat it but Max is building volume.

“So she kept saying I’m not sure what brand of elderly bathroom aids to ask for.” He pauses. “And of course I’m saying DEPENDS. DEPENDS. And you know, you know…she’s so goddamn confused…”

Max stands up with his legs buckled and his face wrinkled like he swallowed a sour lemon.

He says shakily, “Depends on what, young man?”

Anne’s parents are laughing heartily. Max sits down. Anne grins and kicks Max under the table. My mom is looking down and laughing and shaking her head. My dad chuckles and takes a drink of iced tea and begins to chew the ice.

I decide to check on the bathroom. I am grateful it is for a single person. I press the doorknob to lock myself in. The mirror is cloudy but I am unsure why, probably the poor quality of soap. I stand at the door and walk towards my reflection. I try it again and pause mid-walk with my hand and opposite foot frozen. This is how I look when I walk. I am startled by a knock. I flush the toilet. Another knock.

“What are you doing? Did you talk—”

“What do you think I’m doing, Mom,” I say, and wipe my hands on a paper towel.

We return to the table. The pizza has arrived and everyone is eating. Anne finishes a piece and drops the crust on her plate. She wipes her greasy fingers on one another. She begins to eat a second piece. My brother and my dad have their eyes raised to the game on television and my heart starts to beat quickly because a good plan is to say something nice to Anne now, while her mouth is full, and then when she says thank you my mouth will be full, but I can’t think of anything.

“Are you excited?” I say, after several seconds.

Anne swallows and says, “Yeah, I am.”

“I hope it’s sunny tomorrow.” I am smiling.

She begins to twitch her leg and looks where Max and my dad are looking.

“She’s just nervous,” my mother says later, in the car. My dad is singing softly along to the radio.

“Lightning strikes me again…” he sings.

“Remember when Max was obsessed with Elvis?” I ask my parents.

He was nine and I was five. He used to put Elvis pins on his school uniform. There are many pictures of him with his hair gelled, his legs apart, striking with his arm in full circle like the air was a guitar.

My dad told him on a home video, “Well, Max, that is actually a performance trick of Pete Townsend. Of The Who. Elvis never did that.”

“For goodness’ sake,” said my mother.

“Elvis did this one,” Max replied, and he thrust out his pelvis.

What I knew then was that Max loved Elvis, and this meant Elvis and Max could get married. I wasn’t sure what it was to get married, but I knew I loved things, too, like dolls and Ritz crackers, but even when my friends suggested that I marry them, I knew a person and a cracker sandwich were not in love enough to get married. But Max and Elvis were people.

This is still true.

My mother says, “I do remember when Max loved Elvis.”

“You ain’t nothin’ but a hound dog,” sings my dad, “cryin’ all the time.” My mother strokes my hair.

The wedding is not a sunny day, but it is not raining. I am at the place for the first time. It is an arboretum full of rare species of trees. People will walk up a small hill to reach the rows of chairs to see in front and between, slightly raised, a wicker arch wound with lilacs. Max and Anne are being photographed by my Uncle Sam. My parents and I walk to the couple.

I say, “I will be right back. I have to find the bathroom.”

“This is a garden, sweetie,” says my mother. “Where are you going to go to the bathroom?”

“In the flowers,” I say and stare at the tops of Anne’s arms, protruding like white semicircles from her dress.

“Maybe that’s why Max loves her,” I say aloud, “because he likes to knead the tops of her arms.”

“Tess!” My mother slaps me on my hand.

My cousins and aunts and uncles filter into a line to watch the photographs being taken. They are talking and the sun is coming out. Anne enters the photo. Her dress is the same color as her milky skin. It flares and reaches her shins. Her hair is slicked back and she is holding flowers right beneath the crease in her bustline. She is smiling and I can barely tell she is wearing glasses.

“Do you want to take off your glasses?” Uncle Sam asks her.

“Yeah,” she says. She walks over to her mother, who is dressed in a lavender pants suit, and hands her the frames. Sam shoots a couple of photos.

“I don’t think they love each other,” I say to my dad.

“How would you know?” my mother asks in a whisper.

Max is next to me and our parents stand on either side. His tuxedo is the same color as Anne’s dress and the sleeves are too long for him. He shows teeth for his camera smile. I catch a foreign smell like spicy leaves and remember when I tried to make a dream journal, but the only dream I wrote down was that I was a little kid again and my big brother and mom were there. She took us to a park, but it wasn’t a park, it was a patch of land near the same interstate I always dream about with a sign that said PARK. My brother and I tried to have fun without any equipment but we couldn’t so we ran over to a ditch filled with fall leaves that had a stone staircase leading down into it. He went into the ditch but for some reason could not climb back out. I went in after to help him but I couldn’t climb out either. We called for our mom but she had left.

The line shifts. I am in it and Anne is next to me.

She smells like baby powder and hands me a clump of lilacs.

“Thank you,” says Anne. “Could you hold these,” and she walks back to Max. He puts his arm around her waist. Sam moves and they turn their heads to follow the camera.

“Kiss again,” he says, kneeling, and they do.

Lara Avery was born and raised in Topeka, Kansas, but she hopes to die somewhere else. Lara is a senior at Macalester College where she majors in humanities, media, and cultural studies with a focus in film studies. In other words, as she says, she will be broke. You can check out more of her writing at iamjustgoingtosayshit.wordpress.com. “Anne is Elvis” was originally published in Chanter.

Tina Horton is a photographer in Sacramento, CA.