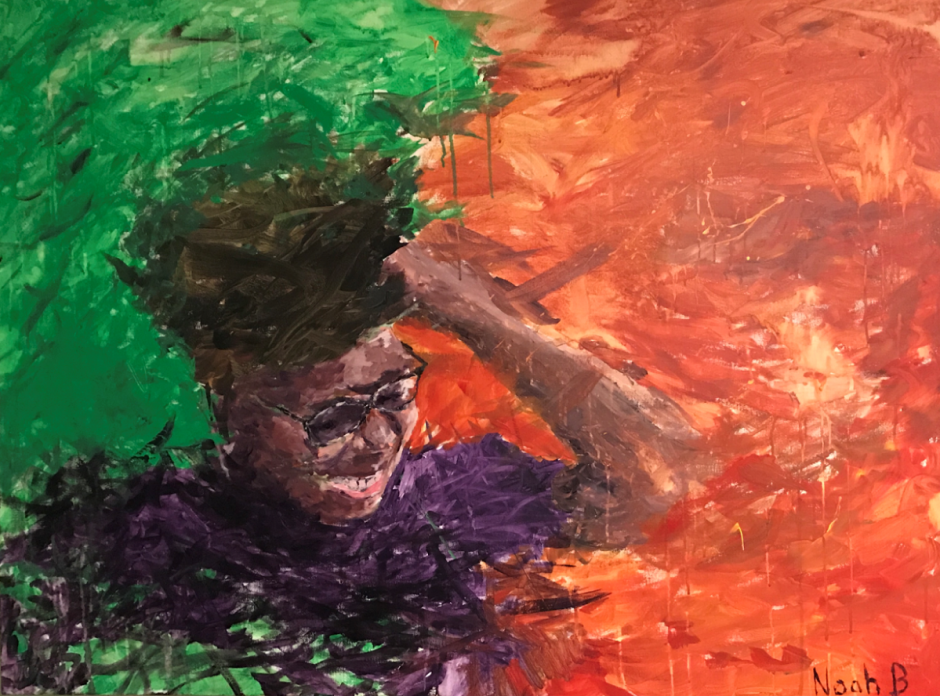 Portrait of a Friend, Noah Bavonese

I believe in being Haitian. Haiti has always been looked at as poor and dirty because it is a place where everyone takes from but never appreciate. Being born and raised in Haiti I always identified as pure Haitian instead of just saying “African-American” but because I adapted so quickly in America I lost my accent. I receive a lot of backlash about how I do not look or act Haitian enough. Perhaps I should carry around the cat I supposedly eat, my voodoo drums or the hut I apparently lived in all my life. That sort of ignorance gave me tough skin and made me value where I come from. Our traditional ways of doing things have shaped me into the woman I am today.

I believe in good food which fortunately consists of rice, rice, and another spoon full of rice. No meal is ever complete without rice, it is the main entre. For every occasion, my mother would make a pot of different color rice; yellow, white, black, with or without beans – they all had their own occasions. She also cannot cook anything without homemade seasonings such as maggi and epis. If anyone were to ever skip those two key ingredients the food is deemed to be seasonless and no one is going to eat it. Whenever we have people over they should be prepared to wait over an hour until the food is ready. It does not matter what is being cooked- that is the estimated wait time for Haitian food – do not question it.

I believe in my mother’s dreams. If the street lights were on and I thought I was going out my mother would sit me down on the bed and say “Petit Cheri, mwen sot fe yon rev;” she just had a dream. To an eager teenager, it felt like as soon as I was about to go out the door she had a dream. But that was not the case. To Haitians, a mother’s dream is the warning that comes before destruction. Believe it or not, I did not go out that night.

I believe in being immune to sickness. If you are Haitian you are never sick. I only started getting sick when I moved away to college. God and Lwil Maskriti (black castor oil) is your doctor. My sophomore year of high school, I was silly enough to think because I had a little “stomach virus” I could stay home from school. In my household, there were no days off from school. Instead of bringing me to the hospital my mother had her own remedy. I always thought she just boiled random leaves from the palm trees outside, added salt and made me drink it. In reality, she circled the neighborhood twice to pick out specific herbs to boil and that was all the medicine I needed to make it to school by 7:20 AM. Of course a couple of hours later I felt no more pain but I did not expect anything less. The only catch is mothers are the only ones that know which plant heals which sickness; I can search for hours outside and find nothing but palm trees and leaves.

I believe in beatings. The line between child abuse and discipline was thick growing up. I did not get any warnings, there was only “the look” and the cringed lips that already seem to straighten me out. The only downside to this was all of my friend’s parents were also my parents. There was no such thing as having fun after school because it was very likely that my friend’s parents would pass by and see me then report to my mother minutes after with the exaggerated version of things. Attempting to explain that I stayed for tutoring or anything else when I arrived home is always a mistake – shoes, belts, or even branches outside would come flying towards me before I can say a full sentence. God forbid I raised my hands up to block it and accidentally hit my mother the world would forever hear the tale of a disrespectful child beating on her mother.

I believe if you’ve met one Haitian parent, you’ve met them all because “yo tout menm jan”, they are all the same. I truly think there is a manual out there that contributed to raising me. If I am not abiding by the three L’s legliz (church), lekol (school), lakay (home) then I had no business asking to go anywhere else because that would imply that I had free time and needed some more chores to do. Even though I never had complete freedom to go wild like the other kids, I appreciate all of the disciplines my mother instilled in me growing up.

Ledjine Sadira is a Social Work major at Tallahassee Community College. She says childhood in Haiti and her experiences growing up as an immigrant in Miami are her inspiration as a writer. “Wi, Mwen Se Ayisyen: Yes, I am Haitian” first appeared in Eyrie.

Noah Bavonese studied graphic design at Oakland University, graduating in 2019. Originally from Ann Arbor, Michigan, he is currently an animator and illustrator in Vancouver, BC. “Portrait of a Friend” first appeared in Oakland Arts Review.

being half brown is