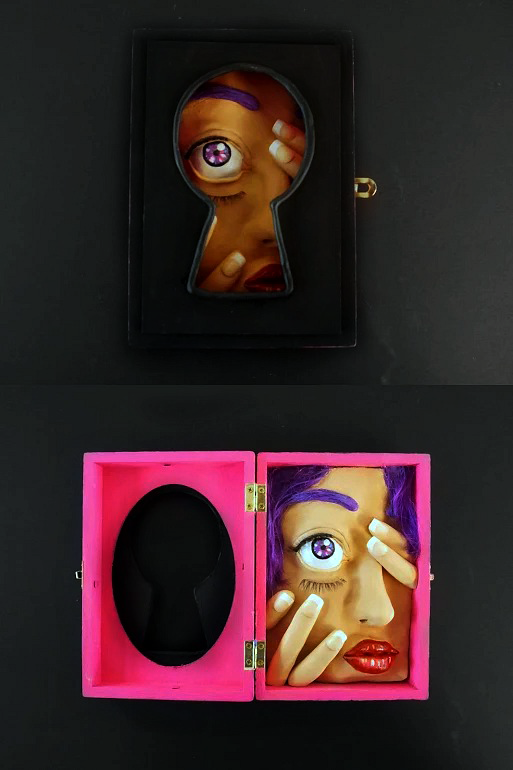 Do You See It, Mommy?, Hannah Elizabeth High

Back then we were just bodies. We would watch Cosmos on Netflix and wrestle on the couch, knocking over empty beer bottles with our eyes closed. Sometimes, Jackson would pause to marvel at a projection of stars, but I could never bring myself to look. I could only watch the pale skin on his shoulders, the way it absorbed the color of the TV, flashing with artificial light.

Luke goes scuba diving in the Atlantic. He descends on a guideline and breathes out of a respirator, which prevents pressurized air from crushing his lungs. When he reaches the ocean floor, he uses a boxy camera with two big handles to take pictures of lobsters, flashing at them with a mounted ring light.

In the photographs, they look extraterrestrial. They are ribbed and whiskered, and their eyes glow a nuclear shade of green. One picture shows a lobster surrounded by floating debris, staring straight into the lens and raising its claw as if to strike.

I told Luke it looked enraged. He clicked off the camera and shrugged.

Hurricane Noel was defined as a tropical depression. This meant that there was a scarcity of pressure in the hurricane’s center and a rapid, lashing wind around its edges. It meant that the waves on Cape Cod were six feet tall.

That afternoon, my cousins and I snuck out of the house while our parents were asleep, venturing to a nearby beach which was roped off and abandoned. It hadn’t started raining, but the sky and the sea promised a storm.

The clouds that day writhed and coiled in dark lumps, the waves pounded the shore in a series of collapsing walls, the beach seemed to tremble with each clap. But I wasn’t afraid. My cousins and I donned orange life vests and ran headfirst into the ocean. As the waves shoved us forward and dragged us back, we made a game of fighting the current and clawing at the sand. We squealed with the delight of children, laughing in the face of nature, tempting the ocean with our bodies, yet always returning to shore.

Nick and I used to have contests where we held our breath. We would go underwater and do laps in the pool back and forth until somebody quit. The chlorine stung my eyes, but I kept them open to see the sunlight diffused through the water, warped and murky.

A knot tightened in my sternum as I swam. I felt my lungs shrivel like fruit rinds, but I was determined not to lose. When I resurfaced—finding Nick propped up on the edge of the pool, panting—I beamed. My chest expanded, and my body returned to me. I had found the one competition I could always win: a game of suffocation, man to man.

I once read a Sports Illustrated feature called “Rapture of the Deep.” It told the story of Francisco “Pipín” Ferreras, the undisputed titan of competitive freediving, a sport which involves no equipment, save a pair of flippers and a weighted sled.

At the height of his fame, Pipín fell in love with Audrey Mestre, who had never taken an interest in diving but was determined to empathize with her lover. She began to dive herself and soon discovered an innate talent which rivaled that of her husband. In 2000, she won the world record for women’s freediving. In 2002, the diver Tanya Streeter took the record back. Pipín urged Audrey to go deeper—surpassing Tanya’s record and his own. If Audrey could complete the dive, she would make history.

But she never did. The sled’s inflation device malfunctioned, and Audrey lost consciousness 538 feet below the surface. Pipín dove down to rescue her, and upon resurfacing, there was bloody foam pouring from her mouth. He pulled her onto the deck of the boat and attempted CPR, but her brain had stopped, and her heart was soon to follow.

In eighth grade, a boy named Jared invited me to his uncle’s house to use the above ground pool. He sat next to me in Social Studies, and he’d recently made it a habit to poke at my dick with the dull end of a pencil. I was confused and intrigued, so I accepted his invitation.

After school, his mom drove us to his uncle’s house and left us there alone. We hopped in the pool and passed a volleyball back and forth. Whenever he missed a point, he would surge forward, tackling me and holding me underwater in playful rage. I was certain he was making a move. His bare chest was pressed against mine, and he was hard through his swim shorts. So I opened my eyes underwater and reached for his drawstrings.

He froze. I came up panting.

“What are you doing?”

I coughed, pretending to have swallowed water, buying myself time. The pool vent hummed, and I could hear the neighbors’ kids playing next door. Eventually, in shame and confusion, I tucked my chin and looked down.

He’d taken his dick out of his shorts. I could see it through the water—the color of pale flesh, reflected, rippling on the surface.

This past summer, Jackson and I went hiking in the White Mountains. After the first nine miles, we pitched a tent at a campsite called Thirteen Falls, situated by a long, icy river. We were exhausted and matted with sweat, so we stripped down and hopped across the rocks, shivering against the water which licked at our toes. The trees on the shoreline seemed to lean toward us, drawn to our bodies as if by an invisible force. I could see Jackson smiling across the river, his eyes switching between me and the frigid water below. I didn’t wait for him to dare me—I just jumped.

Later that night, we watched the stars. They were clearer than I’d ever seen them, and it comforted me that there were beacons out there, perhaps guiding lost souls. Jackson told me he wanted to live forever, even if the human race had to flee the Earth and colonize space. I told him I couldn’t bear the thought. I told him that life follows the scarcity principle, that its supply is limited and its demand infinite.

This is why I jumped. To feel the cold erupt in my bones, flooding my skull and needling around it; to shock myself with the notion of mortality, to send myself scrambling back to Earth, clutching for the ground.

Jackson once pulled up a picture of the Andromeda Galaxy and said to me, “Isn’t it beautiful?”

I explained to him that space terrified me because it was the purest form of isolation, and I didn’t want to be alone. I said that I equated space with the ocean: uncharted, endless, and black.

So when we watched Cosmos, I would dig my fingers into his back as if I could hold him down. In return, he would wrap his hands around my throat and show me what space felt like.

Ryan Cahill is a senior at Washington University in St. Louis, where he pursues a degree in English, Creative Writing, and Spanish. “Breathless” was originally published in The Mochila Review and is featured in the Mochila Chat podcast. He lives in Boston, Massachusetts.

“Do You See It, Mommy?” first appeared in Legacy.

for the time i saw Marsha P. Johnson at the Stonewall Inn on a visit to new york city