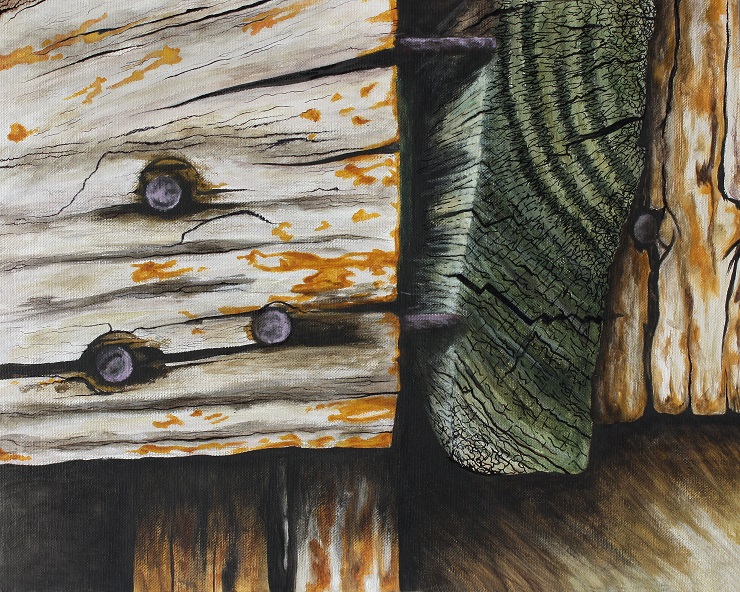 my mother never made me blackberry pie, she wanted me to know how to make it myself, so that i could quench my own thirst as i licked my lips, and learned that half a dozen eggs, was the same as six.

the blackberries i pick from my aunt’s yard stain my hands. she never calls anymore. and i wonder how much that has to do with time and how much it has to do with my mother. i guess it just takes six dozen of a person or half of another to lose a place to stain your fingers.

blackberries tumble out of black tongues leaking black syrup like needles oozing whatever your drug of choice may be, a high is just a high, it’s six of one, half a dozen of the other.

i get off by licking the sides of buses as they pound slush and salt into a melting winter, if i lean too far my head will explode, and i risk becoming half of one and six dozen of another.

i am too far away, i slouch, i place myself between the wall, the professor writes on the wall, i lick the wall, the minutes tick, i start to slip and time finds a way of passing into six minutes or half a dozen.

i’ll take cliff diving over uprisings any day. i’m sick of all your insane demands, stop inviting me to protests on facebook, i’ll never show. i’m a man on fire and i’ll take kicking or screaming, but not both. it’s six of one, half a dozen of the other.

blackberries are never as sweet as i want them to be. i’d paint them on my body if it weren’t for me having eaten them all. i’ll play with a dozen in my stomach and leave you half a berry to suck on.

i lean into your mouth, and you show me the universe of stars beneath your tongue. the sweetness of blackberries swallowed up by your breath which tastes like the sound of light-years whirring by. maybe it’s six million stars, or maybe it’s half a dozen.

a blackberry cut in half reminds me of how i would feel under the light of introspection, splayed out on a lab desk waiting for you to notice, the juice from a blackberry was too personal for me to taste, so i let it go to waste, it was half of one or six dozen of another.

i let time take it’s place and i wonder about the clouds. what a silly way to pass the time, just existing, and not bettering themselves, i say as i take time to tell you about the weather- it was that or talk about us together, half of half a dozen is three more minutes of talking to you.

six blackberries stained the carpet again and i luxuriously dragged my nails through their messy insides, licking my finger tips. i wanted to crush them all and feel some semblance of control in my shaky fingers. i wanted more than six but all i had was half a dozen, squashed on my floor.

i find a cup of fresh blackberries on the corner of main and st. paul, i wonder what farmer would have thought to leave them alone. to wilt in the afternoon sun and to never say sorry. i pick them up and toss them back, it’s all the same when they’re inside you, six of one or half a dozen of the other.

the way you biked past my window was always arbitrary: you were never quite sure of where you were headed. your young, skinned, bleeding knees were so careless and healing, how i wish i could do the same. i’ll find comfort in counting my scars, six exactly? or half a dozen?

you fed me blackberries from a fresh box you said you had picked but i knew you never had the time. simple intimacy couldn’t satisfy you now or ever before. i keep writing all the same, to me you were always just half of one and never more.

Mack Baker is a student at UVM studying Psychological Science and Studio Art. They are currently one of the editors of Crossroads, an independently published literary magazine based in Burlington, Vermont. In the past, they have been published by Vantage Point, Crossroads, and the Lit Club at the Lamp shop (Burlington, VT). Their piece, Half of One, was published in the Fall 2017 issue of Vantage Point, a literary magazine run through UVM. They are an avid writer and take great joy in bringing people together through the written word.