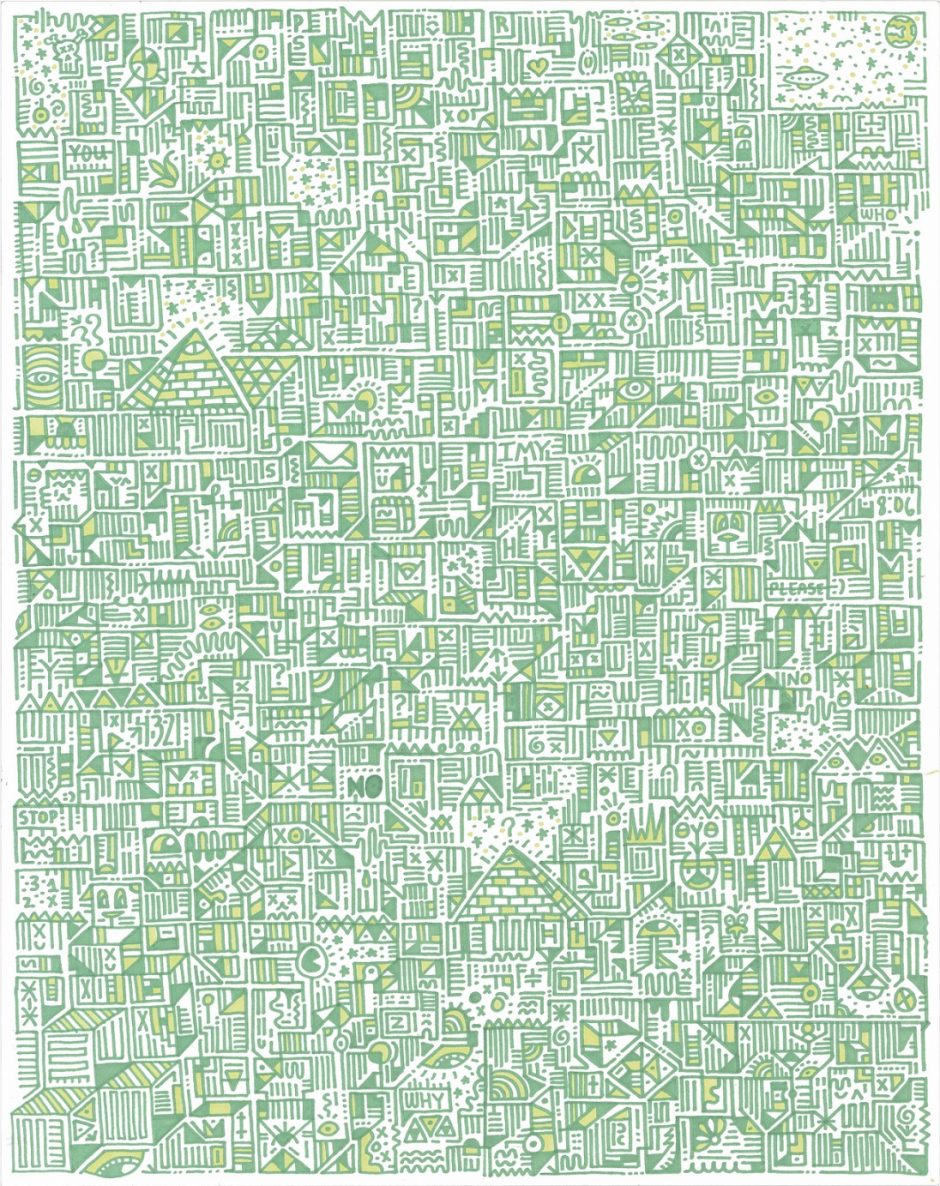 I start with the IKEA bookshelf I bought to display the volumes of Vonnegut and Fitzgerald and Nabokov that my brother gave me when I graduated. I pull all the books out and throw them into an old grocery bag and then I disassemble the shelf until it is piles of planks and screws and pegs and I put these onto my bed. I disassemble the high-backed desk chair that I had imagined myself sitting in with a mug of green tea and maybe the Nabokov or Vonnegut books, spines broken, laying open in front of me and maybe a scrapbook and some of those squiggly scissors and newly printed photos and the early morning sun shining through the sheer white curtains that I had fashioned out of fabric I found in my childhood attic. I add these curtains to the pile too.

I pull my duvet into a makeshift Santa sack and drag it down the stairs. My heart is thundering and my head fills with smoke, when my doorman asks if I need any help with that, my tongue stays stapled to the bottom of my mouth. I don’t know the words for “yes I need help, I think the walls in my apartment have moved three inches closer to my bed and I think the bathtub used to be a lot bigger, didn’t it? And hey, by the way, do you ever feel as if the sewer grates on the street aren’t strong enough to hold the weight of everything people are carrying with them?” So instead I force a smile and shake my head and when I go back upstairs I clear out all my stretchy jeans and too-big blouses and mismatched socks and knit hats and scarves from my grandmother’s old dresser and I get this urge to throw them out the window and watch them swirl down in a Gatsby tornado of silk and polyester.

“These shirts,” I would yell, “Look at these fucking shirts!” Except I don’t and instead I leave them outside of St. Augustus’s on 2nd Ave.

Next I clear out the rest of our room and then the bathroom and the kitchen and by the time I get to the bed, my skin is dry and salty and I can’t seem to pull the pieces of wood apart and now I can’t remember where this bed came from. Was it always here? Did he carry it in? Did I? Eventually I decide to just pull the entire thing out, dragging it across the hardwood floors with a low grinding sound that makes Janet, from downstairs, come up and see if I’m okay. I tell her I am and she looks at me for a long moment like maybe I’ll break down and tell her that last night I sat in the pantry for four hours because it was the emptiest room I could find and that even when it’s dark out I close my eyes and the back of my eyelids are red and in fact all I’ve seen for days is red. But I don’t say that or anything much at all except that I’m just clearing out some old things that I don’t use anymore.

By the time Janet leaves and the bed and the too-small mattress are leaning against the dumpster outside, the sun is gone and the apartment is dark, on account of how I already removed all the light bulbs and also the lamps and also the candle from on top of the toilet and also the Christmas lights that I’d bought to hang in the room next to mine because I thought the light would be less harsh but it had turned out it didn’t matter. With only the light pollution coming through the naked windows, it’s harder to see what I’m taking out, so it’s easier to take out everything and soon there’s nothing left but the scratch marks on the hardwood floor and the fridge which I’ll have to call someone to come get and also the photo and the magnet holding it up that I don’t know if I can throw out but I also know I can’t look at so I take them off and slide them under the fridge like it’s an accident which I guess it was—do accidents ever stop being accidents?

Suddenly it’s five A.M. and I’m lying on the cold floor and I can’t close my eyes on account of all the red but I can’t keep them open because the walls and the windows and door-less cupboards are all vibrating and the apartment still feels so full and I still don’t.

Five minutes or maybe five hours later there’s a knock at the door and it’s him. His eyes are a little too big and there are weird purple shadows on his face and I can’t figure out if it’s because of the no-light bulb thing or maybe they’re really there.

He says my name very quietly and he looks around me like he’s seeing all the things that aren’t there anymore.

He asks me how I am but he says it like he already knows the answer and he looks at me like he did when my cat got run over by the mailman in the eleventh grade and we had to drive her to the vet to get cremated.

“I wanted to come earlier but I thought you wanted some space.”

I repeat his last word back to him and then blink a couple times and then he asks again if I’m okay.

The gummy silence stretches from me to him until eventually I open my mouth. “I got rid of it all,” I tell him.

“I wish I could help you,” is what he says next. I hate it. I try to remember if he was always this stupid but I can’t seem to remember anything from before the world went red and the lights went out and all the walls started vibrating. Except that’s a lie too because I remember the way he laughed when I first told him and I remember how he asked me my grandmother’s name and I think I even remember now that he carried the bed in all those centuries ago.

When we’ve been standing quietly for too long, he steps into the room and shuts the door that’s been open. My breath starts coming in and out too fast and the red is spreading and even though we’re the only things in it the apartment it feels so small.

I’m supposed to say yes and also that it’s not his fault either and also that it’s no one’s fault and maybe it was just what was supposed to happen. Then maybe I think I should tell him about why I got rid of everything we used to own and also all the things I owned before him and also how I haven’t eaten since I can’t remember when. Except still all I say is “I don’t know.”

His face turns and I see now that the shadows are real and they’re deep semi-circles under his eyes and I wonder if they match my own except I can’t check because I threw all the mirrors out yesterday. I see now, for the first and maybe only time since I’ve known him, that his fault lines are shifting and stretching and he doesn’t seem to know what to do anymore and at least I got the chance to make the apartment feel like me again. I try to feel how he feels but it turns out I can only feel what I feel which is red and shaky and empty and maybe it’s the same as him or maybe it’s different.

“I just…” I say, and I think of how I couldn’t explain myself to the doorman or Janet or those stupid fucking shirts and I should at least be able to tell him. He looks so expectant like maybe I’ll finally tell him that I spent so long imagining us all making cereal in the morning, him leaning against the counter and me running around picking up found objects on the floor: a dropped spoon, a stray shoe, a small lunchbox.

“We can get through this,” he says and now I can’t tell anymore if this conversation has been linear or if I’m hearing different things he’s been saying all out of order because I could have sworn I’ve heard this from him before. When he says through he really means past—we can get past this—and when he says this what he really means is her and if I get past her than what was the point of all that imagining?

So I tell him okay and that we can get past it and that I’m sorry I threw away everything in the apartment—that I was trying to make the outside feel like my inside which was empty and now I know that that isn’t a healthy reaction and that what I was supposed to do was buy a carton of Turkey Hill and watch reruns of Frasier and laugh-cry every time Niles and Daphne just miss each other and then in a few days I was supposed to go back to work and then in a few weeks we were supposed to try again except I don’t mean a word of what I’m saying and then I tell him I have to go to the bathroom and he doesn’t know that I already took the toilet apart and then I open the window.

Vincente “Vinnie” Hagar graduated from Anne Arundel Community College in 2017 with an Associates Degree in Art-Visual Design. “The Grass is Never Greener” first appeared in Amaranth. More of his work can be found on Instagram @vinniehager.