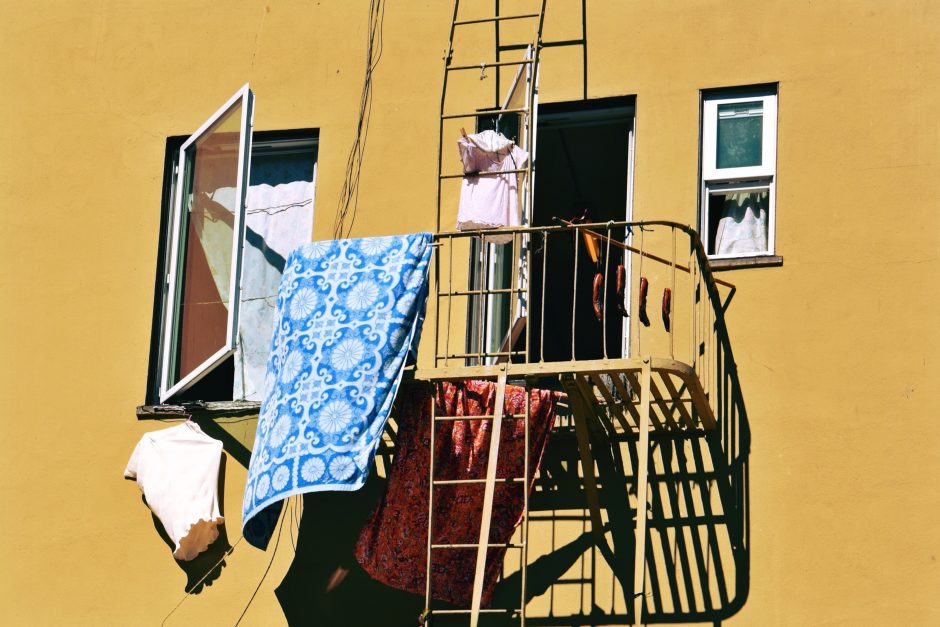 When they met they fell in love and decided to get married and all of a sudden they were in California. The successive events were short and definitive as knife wounds. His father was dying and needed someone to stay with him in his home outside Fresno. He flew out first. His father died. She followed in a car out of whose windows stuck lamps and drying racks and antique chairs snitched from her ma’s house. The backseat was lined with Styrofoam mannequin heads that held her wigs. Each wig demarcated an event. That day she wore a red wig because during her three-day drive late summer had snapped dramatically into fall. Her real hair was flyaway brown and cut in an unfeminine bob. When she pulled up the front yard was covered in leaves and it was a real house with a real live front yard and patio and fireplace and garage. Just like that: bills, gas, his dead dad’s Jeep. The dream had weight and a shape. At night he lay his head alongside her stomach as though they were expecting and listened to what he pictured as a little train chug and gurgle through her stomach, unknotting, detangling, until she got impatient and twisted away and started making digestion jokes in the dark.

She threw herself into domesticity. Their house filled with animals. They had three cats named after presidents and two dogs, a bluetick retriever mutt and a sloe-eyed Lab. She had her eye on a bulldog puppy. She showed a picture to her fiancée. That dog’s really ugly, honey, he said doubtfully. Baby, she said. She was wearing a blond wig when they bought the dog. The dog snapped at the wig’s complex braids. Little shit, she said cheerfully. They named this dog Divine. She was in a John Waters phase. She began to realize she most loved the smallest fragments of her life, beats so short there was no space to project unhappiness or anxiety on them, moments that could be cut and shown in any respectable detergent ad or family sitcom. Sun cutting through the blinds. Her fiancée on the patio yawning clouds into the frozen morning. A perfect sangria. A birthday cake haloed with candles. The world of perfect moments could be reached through food. She bought cookbooks and baking pans and a whipped-cream shaker that could be flavored with lavender or persimmon or rose essence. She bought a stand-alone mixer. She put off the actuality of the cake in order to deepen the idea of the cake, the dream of the cake. Each recipe took days. The icing and batter had to be refrigerated overnight at least. Then the cake had to be refrigerated all together so it could solidify. She knew it had something to do with settling molecules. The next day she’d dip a knife in steaming water and smooth it over the cake again and again to melt down the lumps in the icing. Imperfections vanished. She produced the flattest whitest cakes she or any of her friends had ever seen. She was a star at parties. A coworker said the cake looked like printer paper. Like untouched snow. She almost hated to cut into it. Here was the apical moment. The first slice came out smooth, thick, beautiful. The middle layer was stained deep with blueberries. Then it was over. She ate a lot of cake but didn’t much enjoy it. Is that lemon zest? another girl asked. She tried to remember. She couldn’t remember. All really good cake sort of tasted the same. That looks great, her fiancée said. He didn’t like sweet things. She thought about all the men in her life who made a point of not liking sweet things. He ordered a lot of delivery pizza. She would take breaks between mixing and baking to watch him tear into a pizza with Zen singlemindedness, folding slices in half, stacking slices, hissing the food’s steam back through his teeth in animal surprise, chewing half-open to save the roof of his mouth. You don’t want any? she asked again. The cake was honey-ginger-carrot with a creamy orange glaze. Nah, you go ahead, he said. It’s your cake, babe. She looked at the cake and felt sick. It was overwhelming. Its pate gleamed with honey and grated orange peel. I’ll take it to work, she said. By now she had increased her recipe time to six or even seven days.

He was distracted, enthusiastic, forgetful, loudly sensible. He said he knew a guy who could maybe hook her up with a cool bakery job. He listened to his friends’ postulations about global relations and philosophical claims with more silence than interest. One had the feeling when talking to him that he had retreated into a kind of pleasant enclosure of his own thoughts. He began refutations with: Well, I think, or else: No, what I’m saying is. In this way he accumulated many friends who had the same pleasant glazed expression and nodded amiably at his fiancée like she was an animated figurine. When he wasn’t at work he was in the garage writing songs. He said When we’re famous and Once we’re rich half-jokingly and half with an enormous vague intentionality that ballooned around his consciousness like a badly pinned sheet. His songs were either about the corrupt women he’d slept with in his degenerate past or about his one true girl. His friends supported him. They wanted to help him get a mixtape out. His half-intentionality drove him crazy. He wished he could either be entirely carefree or else entirely devoted to art. If he could be totally one thing or totally the other, he could consider himself successful. He fell into a little spell of depression. He noticed the house’s grime and pet hair and general unpleasantness like it was all new. He began an aggressive campaign to take the house back. Spiders fled their corners and were immediately eaten by the cats. The vacuum coughed and rattled with pennies. She was a casual cleaner, a miss-the-corners cleaner, and now he went through each room with precision so microscopic and unflagging she wondered if he’d come from a military family. She had made a point of not asking about his family and now half-regretted it. She started to speak in long half-sentences that broke and splintered as doubts and neuroses coagulated her stream of thought.

One morning they walked into town. After a month of fall, the cold was sinking into the trees and making itself at home. The air was so still and frozen they felt like intruders blinking into the bright outdoor cold. They walked in silence. She hadn’t worn a wig for fear the cold might fray or freeze it. His hands were raw with cold and shone from wiping his nose. At the corner of Market and 23rd they stopped inside a coffee shop they’d never seen before. Gentrification, he said wisely. The old man alone behind the counter made their coffees. He had a little raisiny face like her late grandfather. As the old man passed the coffees over he said: Listen, if I said you could change the course of your lives, would you want to? They looked at him. He was smiling. She asked what he meant. If you could do something differently, he said. If you had the chance. A do-over. She felt a shift in her thinking she hadn’t felt since pre-proposal, pre-fiancée, a conception of self without this other. She skimmed back through what she considered pivotal events and found herself in memories that seemed to have nothing to do with her. Chasing baby praying manti in wet North Carolina heat. Crying at a music festival while the performing Euroband dissolved at the edges into acidy tendrils. He was remembering playing guitar at a local store in while the owner watched and later shook his hand and said Keep it up. They slipped briefly from together-life into apart-lives. Which point could be traced directly to his and her discontent? What course could have maximized their individual happinesses? Hopefully this was that course. She felt the long nasty pull in her stomach towards out, other, away. Well probably she’d made the right choices. Whatever that meant. Otherwise. She didn’t say anything but smiled politely. The store was dark and overwarm. They paid for the coffees and went outside. He’d forgotten where he wanted to go. The frost steamed heat off their faces. Her face was red and his nose already slick again by some kind of familiar magic.

Josephine Sloyan is majoring in English and French at Grinnell College. She’s been previously published in the Oakland-based zine “White Dads.” “Choices” originally appeared in the Grinnell Review.

Hayley Cormier, originally from Granby, CT, is a rising senior at Boston College double majoring in Psychology and History. “Still life in blue and yellow” first appeared in Stylus.

The Space We Have Left