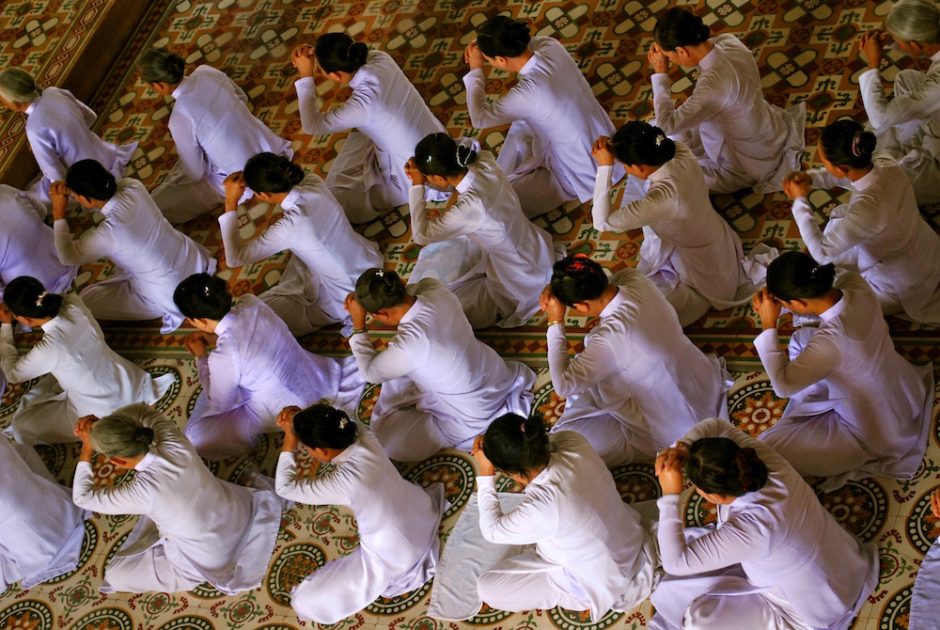 I thought I would have something on her, this nun. I thought that being out in the world, spending my time not with my eyes closed, wearing pants, watching television, would give me something that she didn’t have.

But now she’s coming slowly down the hall and I’m smiling already, far too soon, giving myself away.

And now breathe out all negative thoughts in the aspect of thick black smoke, out into the sky, where they will disappear, never to return again.

Droljang lives in the nuns’ residence, while I stay in the Female Dorm. She has been living at Kilnwick Percy Hall for a couple of years, come from Scotland. It has stayed in her accent. She has a shaven head—“I need to cut my hair again,” she says, rubbing her head with her palm—and trainers with the heels worn down from where she has slipped them off so many times. She now runs the Bed and Breakfast in the renovated outbuildings. The facilities are clean and well-organized. Every room is named for a tree: Birch, Elm, Gingko. In the laundry room, Droljang stands in the steam, folding red and yellow robes for the other nuns and the white sheets for the guests.

“Deary me,” she says, and gently waves a fly from the ironing board.

Five minutes till dinner and the little pestle in its bowl will chime up and down the hall.

The smell of rosemary and olives.

Kilnwick Percy Hall was built in around 1845 on a hill in the hamlet of Kilnwick Percy. Four colossal Georgian columns form the frontispiece. The grounds are wide with woods and a large lake that is now dry, and a chapel, in the Norman style, dedicated to Saint Helen. A mile away is the little town of Pocklington—greengrocers, video rental, pharmacy—and then the hills, purple with mud and bracken, are East Riding, the Wolds of Yorkshire.

This particular week in summer, there are four working visitors at Kilnwick Percy Hall; Nick, Mark, Bill and me. There is also a monk from Thailand. He has come with a translator but doesn’t talk much himself. He walks around; he picks up the pamphlets outside the meditation room and looks at the pictures. In the evening, when the residents have their puja, he listens and moves his lips to the foreign sounds.

“What kind of thing do you like to do?” she asks us. “Bit of gardening? Or cooking?”

We work for our room, board, and free spiritual lessons.

Nick, a young student of geography, says he’ll do anything. He’d like to be outdoors. Mark, quiet and tough, has been dropped off by his girlfriend and is waiting for her to turn the car round on the gravel outside. Bill has been here before. He knows the score. The hall was used by the military in the Second World War, he tells us. It was a training headquarters, then a family home for several decades, before the Buddhists moved in. On the first floor are the meditation room, a gift shop, a dining room, and offices. The upstairs is bedrooms.

I say I don’t mind cleaning. I fancy cleaning the podium where the nun teaches, and all the little offerings that sit on the shelves around the room. I want to polish the belly of the Buddha in the glass cabinet behind her.

They set me up making beds in the Bed and Breakfast with Droljang.

In the laundry room, she shows me how to arrange the bedside trays—ten sachets of milk, two butter biscuits to rest on top of the coffee filters, one of each color of fruit tea. She also teaches me how to fold the towels so that the labels don’t show. The Bed and Breakfast is four- star.

The New Tradition has become a brand; the original World Peace Hotel has been franchised across the world, as has the World Peace Cafe, where Bill sits drinking a cup of tea. While Mark, Nick and I stand around him, drinking ours, he tells us that things have calmed down here since five years ago, when he last visited. Back then there was a scandal with one of the monks, who in strange moods would take his robes off and go wandering through the grounds, up to the chapel and round the lake.

Bill laughs hard. It was a dilemma for the other monks and nuns to know what to do with their brother. In the end, he was removed. Probably placed in a less popular retreat. They wrestled with their consciences, Bill says, because confrontation is frowned upon.

But attachment is a delusion, they say. The teacher compares delusions to dark growing clouds.

Bill says he owns a scrap yard in Tottenham. He calls himself a lay-Buddhist. Each day, he wakes up early and enjoys his own ritual. He makes a cup of tea and takes it outside to look at the hills, then reads from the beginners’ guide to the New Kadampa Tradition that he brought himself. He spends all day working in the new kitchen they’re making in Gingko. Since he’s a visitor, they let him have the radio on while he works. The music drifts into the grounds.

Itake Kelsang Lekma’s load out of the washing machine, underwear like my mother’s. I pull at the red and yellow parts, the holy things, untangling, then lay them carefully over the ironing board. I start to iron the different pieces; the nuns’ robes are made of three pieces, one like a tabard, two that drape to make two skirts. More carefully than I have ever ironed, I iron Lekma’s clothes.

Lekma is an experienced teacher. She tells us, sitting on the platform with her robes around her big hips: “We all want to be happy.”

Sitting hen-wise and kind, above us in the meditation room, “We all want to be happy.”

I think of Bill’s happiness. And my own. When I finish the ironing, I fold Kelsang Lekma’s clothes and leave the pile on the washing machine for her to find, and go to Elm to put the finishing touches to the room. Guests are arriving soon for the weekend retreat.

In the female and male dorm for the volunteers, the windows are twice as tall as I am and there are white shutters from the carpet to the ceiling. One pigeon beds in the cold end of the pillar outside the window, bleating its old song into the stone. Others get into the hall. Kelsang Lekma shoos them out, only because of the cat that she keeps upstairs. At night, I lie in my little bed, hearing first the men in the male dorm next door, talking about something, then the pigeons, the gravel in the wind, the hills. It’s not yet ten o’clock.

When Lekma describes desirous attachment, she says it’s like chocolate. She pretends she is one of us. “Sometimes, you just can’t help it,” she says. She compares indulging in desirous attachment to eating too much of your favorite chocolate; it’s so good at first, and then you start to feel guilty.

I look around the room: everyone’s eyes closed.

The volunteers walk around the dried-up lake, crunching in the grins of old mussels, stuck in earth.

At breakfast, on Sunday, waiting for noon when I will leave for my bus, I sit in the dining room with Bill. The doors are open onto the grass outside where the visiting monk from Thailand is taking his tea. Bill is playing with the little tassel that marks the end and the beginning of his pink prayer beads.

Bill explains that counting is a relaxing thing; he tries to say his mantra 108 times, which is traditional. He takes the mala from round his neck and puts it on the table between us. He says: “You keep this one. I’ve got another.” When I refuse, he says: “It’d be wicked to refuse’m.” So I take them. I play with them as Bill finishes his tea, counting, no mantra yet, other than the sound of his drinking or the sound of the sheep.

Georgina Parfitt writes nonfiction for theHarvard Advocate as well as short stories and, most recently, a novel. She is from Norfolk, England, but feels at home in New England too, and finds that her writing draws from both places, sometimes at once.

Jenny Brum ’12 studied theater, English, and psychology at Wheaton College in Massachusetts. This photo was taken during her semester abroad in Vietnam at one of the stops on her maritime tour of the world with the program, Semester at Sea. She is currently pursuing a career in theater and nurturing an intense photography hobby.