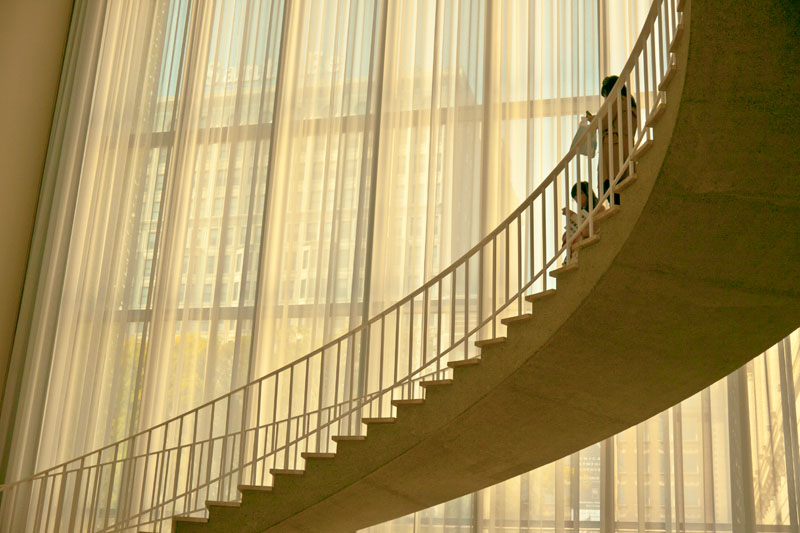 The lesson ends when Mrs. Xia writes in the little notebook. She has given one to each of her students. Martin’s is light blue. The pages are crinkled from the impressions of her writing, the black and blue ink, as if someone spilled water on them and let them dry. Martin cranes his neck to see what she is writing on today’s page.

Mrs. Xia takes a roll of stickers from her bag and shows them to Martin. He picks a triceratops, and she smoothes it onto the page. It means he has done well.

Of all the music he is playing, Martin likes the Bach most. It starts with the right hand playing a melody by itself. When the left joins in, it plays the same melody, but lower. Somehow the two hands sound right together, even though the same moments of the melody happen at different times. Like when Darnell mimics Mrs. Rooney in class. Or on the Blue Line, when his train and another, rushing in opposite directions, pass each other with a collision of air. He can see into the windows of the other cars, and often he can make out a body, a face, and often the face is looking back at him.

He likes when the right hand leaps up to high G and stays there, while the left hand tries to catch it with sixteenth notes—but then rises a half-step to A-flat, and the sixteenths crumble down. Like a cat trying to catch a bird. The bass dives and the treble climbs until they form, for an instant, an interval that should sound happy but is too brief to Martin’s ears to be so. The space between his hands is like the hopeless space between earth and sky.

He nods and tries to smile, but does not say anything because her face is so close. He is afraid they might exchange breaths.

She goes to the door and opens it, and Martin feels as if a door has opened in his chest. He gets up from his bench, and does not mind her hand on his back as he moves into the hallway. The light here is a lot brighter than in the practice room, and he squints into the cleanness. There are several chairs lined up against the wall. Mother sits in the very first one. She has been chatting with Patricia’s mother, who sits one chair away. (Patricia, of course, sits next to her mother, head jutting forward like a pigeon’s, a thick book clutched in one hand.) Mother sees him and, as she stands, he runs—his heart quickens as he collides with her. She stumbles backward before regaining her balance, and smacks the back of his head. That hurts! she says, but he barely hears. Arms around her, he presses his face into her faded cotton shirt.

She is as beautiful as always. Her scent flies through Martin’s body. All he knows, it seems, is the odor of Mother’s cotton shirt, so worn and thin that its purple threads look white in the light. It smells the way the dust on a moth’s wings must smell.

When he embraces her, he remembers sleep, the blanket that he explores, alone, in the darkness, before drifting into his dreams; thinks of his feet sinking into the mulch of the playground after rain, and the damp leaves, knee-high, that he runs through on the way to school, ahead of her. He can hear a muffled thump from her belly. Eyes closed, he puts his right ear against it to hear better.

She exchanges formalities with Mrs. Xia. Hi, Qiu, she says. How are you doing?

“Oh, quite well, quite well. You should hear Martin play his Beethoven next week! I’m thinking about entering him in a competition.”

Martin stiffens. He curls his fingers into her shirt and she reaches behind her to loosen his grasp. That sounds great. Perhaps, if he feels up to it.

“I think he’s ready. He’ll be competing against children a bit older, but it should be a good experience for him.”

Mother puts her hands on his shoulders, and he reluctantly lets her turn him around. He stands before Mrs. Xia, who is beaming.

“What do you think, Martin?”

He frowns. It is not that he is afraid of her, exactly, but he does not know what to say. How would she feel if he said no, he would not like to compete, he would not like to perform in front of anyone? And what could he do to avoid it—just like he could not avoid her breath in his ear, on his neck?

“You are so cute!” she says, and reaches to pinch his nose.

He remembers that Patricia is sitting close by, and blushes. The embarrassment is too much; he grabs Mother’s hand and pulls her toward the stairwell. She resists, and Martin lets go and stalks off as the two women draw out their goodbyes.

The railing is wonderfully cold under his hand. As he hops down the first few steps, he tries to name what it is about Mrs. Xia that makes him so silent. There must be a word for what he feels. It sags in front of him like an old elephant that he cannot move, and cannot climb on top of. According to Mother, elephants remember everything; this one must be heavy with all of its memories. Its eyes are as small as pebbles, and the skin—those folds of skin like on the backs of Mrs. Xia’s hands.

Her children must be small elephants, he thinks, and laughs, jumping onto the landing. At the zoo, the elephants chase each other and wrestle, stopping to poke their noses through the grass. He can see himself among them, in gray sweatpants and a gray shirt. But of course he would get sick. He had thrown up at the zoo.

Whatever the word is for what he feels, it is not a good word. At the bottom of the stairs, he sits on the first step and rests his chin on his hands. He would know it if he could read it in a book. It is almost apparent to him, as if he could teach it to himself by looking into Mrs. Xia’s face. At the bushy eyebrows, and the big eyes from which something has slipped.

Mother, still above, says, See you next week, Qiu, and her first steps send tremors down the stairs. Martin stands to wait for her. When she reaches the bottom, he takes her hand and leans against her thigh.

They walk out the double doors; the wind is strong and tosses Mother’s hair about her face. Winter’s not so bad, just cold. And quiet. The snow covers everything so that you can’t hear a sound. Remember when you made angels in the snow?

They cross the street, which is choked with cars awash in dull light. The sky is red, and his eyes hurt when he looks at it too long. As they descend the stairs of the Blue Line station, he blinks and can still see a red cloud hanging in his sight.

It’s coming soon, you know? Mother says. We’ll have to get ready—stack some wood, get some marshmallows. Would you like that? One thing about the winters here, they have no pity.

Martin’s stomach drops when he hears that word. As he pushes through the turnstile with both hands, he rolls the syllables in his mouth. They taste like the dry and bitter seeds of grapes. With a beep and a metallic rattle, Mother follows. He takes her hand again; together, they amble toward the outbound platform.

Chicago native Kevin Hong writes criticism for The Arts Fuse and is a member of the poetry board of theHarvard Advocate. A sophomore concentrating in the history of art and architecture, he plays the piano with infrequency. “Mrs. Xia” first appeared in the Advocate.

Cameron Taylor is the product of a self-imposed four-year scholastic diaspora that took her from Las Vegas to Pittsburgh. She is a studio arts major who moonlights as a portrait photographer at anime conventions. Tumblr, chai lattes, and The Gays inspire her work. Her photograph first appeared in the University of Pittsburgh’s Collision.