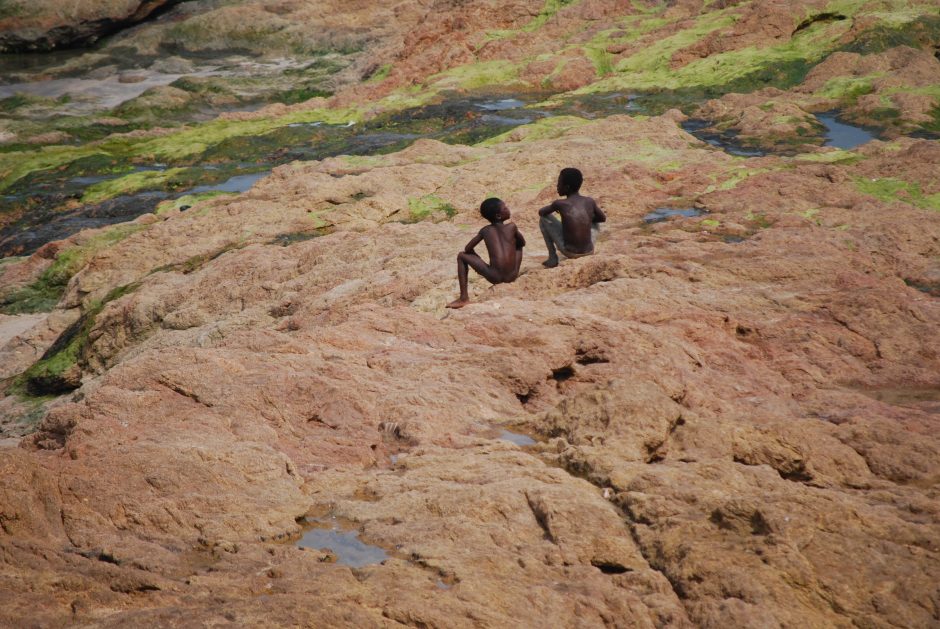 Ghana on the Rocks, Jenny Brum

My son Henry is sitting across from me at a restaurant. It smells like a restaurant should. The waiters are always moving and there is the constant chime of glasses coming together, the steady bubbling of coffee percolating that fools me into believing I live in an organized world. We are getting brunch and we’ve just ordered. For him, it’s three blueberry pancakes and a side of bacon. Orange juice. I tell him to order eggs if he likes—my treat, I’m careful to add—but he ignores it. The waiter asks me what I’d like, and I say the same.

The day before I had said to him, tell me what I don’t know, while his brother shivered under all the blankets in the house. He told me that ecstasy tasted tangy, like concentrated orange juice. I asked him what he had done to his brother. I gave him a dare, he said. I told him Daniel could have died and he shrugged his shoulders. At least he’s not a pussy, he said.

I want you to speak up, too, Henry says. You always get so quiet when you talk about Dad, as if you’re worried someone will overhear you and get mad. Use your lungs. You’re not a smoker, you’ve got them—use them. He inhales so deeply that I feel my next breath snatched from my own lips and brought to his. He exhales. Say it so I can hear you.

I tell him: Being your mother is the hardest thing I’ve ever had to do in my whole life. He shrugs. The orange juice arrives and we both take a sip.

The day before he had taken his brother out to trudge through the snow. It was the most I’d ever seen, over a foot and a half and still coming down. They walked through the park across the street until the black oaks swooped in and covered them up. They came back three hours later, our neighbor Scott carrying my youngest in his arms, delicate and brittle as sundried leaves.

Scott came inside, laid Daniel on the ground, and began to cover him up. He was in the water, he said, drowning. Flailing his arms and screaming and naked. Naked as the day he was born. The boy was shivering at my feet. His skin looked like dried paste. His lips were swollen and purple. His hair had ice in it. He opened his eyes and looked at me. Like moths—big, brown, beating their wings. The first thing my father said to me when I told him I had twins: If one breaks you’ll have a spare.

Henry walked in, and I wished, then and there, that it were him on the ground, at my feet, so I could rip the blankets from his skin and kill him.

I wanted to say: I don’t want you anymore. I never wanted you.

Henry pulled the blue and white ski cap from his head and I brushed the hair from his face. It was Daniel’s hair, too, and I wanted it to look neat. I wanted to take one last look at my son before he died. But Scott said, he’s gonna be alright, Claire, I got to him just in time. I said: Thank you, Scott. You can go now.

The pancakes arrive. The waiter, in a hurry, asks who ordered what before looking down and seeing the same thing in each hand. Henry takes the syrup, the fake kind, and drenches his plate. His pancakes look like a golden, inflatable pool toy in a sticky, golden pool. I take the syrup from him and cover my pancakes the same way, a way I don’t like. Stop trying to be Daniel, he says, and begins to eat.

Henry and Daniel are not any different from each other when they are with me. They smile with their teeth, their pointy incisors glistening. They wear primary colors, though I suppose that’s my fault. They curse. They bring girls home.

The girls are always stupid and beautiful. They have blonde and red and brown hair and they wear lipstick, even in the morning. Coming down the stairs, I hear them discussing their exploits from the night before, giggling like children, using their hands as measuring tools. But I thought they were identical, they say. They aren’t, I tell them.

We didn’t have any logs to light so I stuffed Daniel’s feet beneath the radiator and held his face between my hands. If only your eyes were butterflies, I thought, blue butterflies and not brown moths. If only you were marked as good in some way. If only you didn’t look exactly like bad.

And I thought, maybe there would be some scarring from this, maybe he’ll stay pale, or have purple lips forever.

Daniel is sleeping, has been sleeping, will be sleeping for the next several hours, bundled into his bed beneath all the blankets I could gather. He stripped his clothes off and dove into a frozen pond. Henry says: He asked me, should I just jump in? And I said yes. Henry is dipping each morsel in syrup, dipping the syrup into the syrup, and washing it down with orange juice. Daniel got caught beneath the ice and it was by some dumb, crazy luck that the boys were seen and he was rescued. Henry tells me to tell him about his father.

I fill my mouth with blueberry pancakes to give myself time to think.  I sometimes dream of seeing him again as he was when I first met him. I wouldn’t fall for him again. I look at Henry. How very much like his father he is, stupid and beautiful. I say to him: Your father: the father of my children. He wanted to play baseball. He was born in Raleigh, North Carolina. He turned down a scholarship to N.C. State to sign with the Chicago Cubs. He started smoking cigarettes when he was fourteen years old. He broke his father’s hand with his fastball in tenth grade. He was the second baseman for the Tennessee Smokies.

We met in a bar in Knoxville, Tennessee. I was twenty-one years old. I had a blue streak in my hair. I raced horses on the weekends. My specialty in the kitchen was lasagna. His was missionary. He moved in. I brought my little brother to live with me off-campus.

I didn’t know what an EKG was. He took his first hit behind the bleachers at his old high school. He had a son with another woman. I sent my little brother to live with my aunt. Your father hated the color yellow. He got his first minor league hit off of Dwight Gooden on a rehab assignment. I took night classes to become a nurse. He made shadow puppets with his hands. We told each other secrets. He got reassigned to Single A in Daytona Beach.

I didn’t like his son. I thought about quitting school. My little brother died in a car accident. Your father had shoulder surgery. When we had sex I was in love with him. He lit a golf course on fire. We did it every time we went to the movies. He wasn’t always trying to be mean. I was always sure that I was right. I hated the sound of his voice. He said he would only love baseball. He cheated on his high school entrance exam.

He OD’d in the parking lot at the Daytona 500. I gave birth to two sons who looked just like him. His mother kept his ashes and spreads them little by little when she’s feeling sad. I live in Kansas City. I named my sons after my father and his brother.

Your father kissed me like he wanted to stuff me into his mouth. I thought we were going to live in Chicago. He said, Next year’s the year, next year’s the year. I said if this year isn’t the year I’m not doing this anymore. He hit me across the face. He cried. He took a hit.

The last year he took more hits than he got. His arms looked like rubber bands. I finished nursing school. I got a job in Missouri. He said: This is the year. I said: You’re right. He laughed like you do.

I look at Henry. He’s finished his food. I ask him if he’s satisfied. Yes, he says, I’m full. He is an alien, I think. All this time, my mouth moving, telling, making sense of things, and he is slurping syrup and orange juice.

I’ll have to tell this all to Daniel now, so he’s not left out.

Zack Newick is a senior English major at Princeton. He likes New York and Tokyo and the idea of Paris. He is really loud and really quiet.

Jenny Brum studies theater, English, and psychology at Wheaton. This photo was taken during her semester abroad in Cape Coast, Ghana, one of the stops on her maritime tour of the world with Semester at Sea.

The Mermaid by the Water-pump