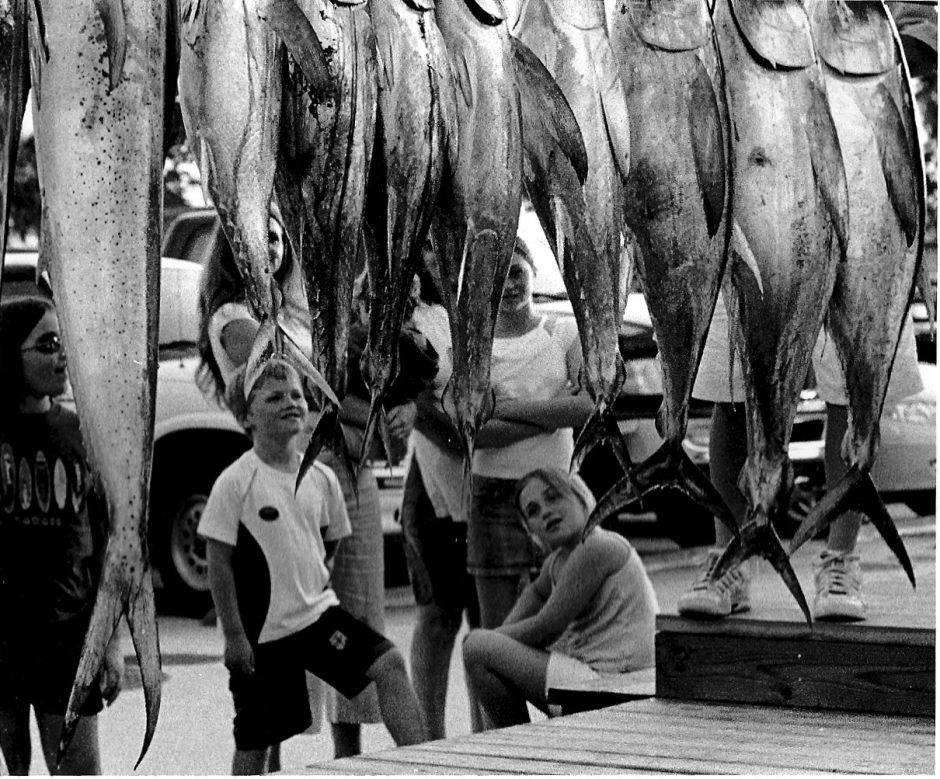 When she was told that Charlie was dead, my mother fell limp and gasping to the earth. My father—who had answered the phone—was startled by her collapse. He somehow had not anticipated the force of his blunt report (“Charlie is dead”) which of course wrecking-balled her, a demolition I saw coming from my corner of the doorway, where I’d run when I heard the phone ringing. Since then, I have always imagined learning of death in this way, the spontaneous empathy of sprawling across the living room floor, the downward motion.

To be so obviously out of one’s element, star-gazing in the middle of the afternoon. And far too efficient for the ease of open air, especially compared with the round-faced children, breathing easy, barely aware of the resistance in their hair. This animal is unused to contending with gravity, unused to the pull of the ground. When fish paint death, it must be a vertical canvas: hanging limply, gasping for water.

Though she’ll never breathe down there, it is important to teach a child how to see underwater. Having evolved away the built-in goggles that slide horizontally across alligators’ eyes, it’s up to swimming instructors to pry open the water-gaze. Lakes are the easiest places to start, with their gentle unchlorinated water, in which bars of yellow sunlight shoot down through the green Here the child forgets her naked corneas and discovers her gills. Without the sharp lines of pool tile she is less likely to notice the disconcerting blur around herthe way faces below the surface are mostly shape and bubblespout.

Charlie’s death left questions hanging in the air. Many for my mother: How much of the name Sister had she lost with his death? How much was there left to lose, after restraining orders and disquieting drunken telegrams, after all the strife strung up between them in life?

They must be hanging, or so the title claims, but the fish seem to float. If it weren’t for the wooden platform, so eerily like the executioner’s stage, they might easily be marching in some sort of enchanted parade, trombones blaring, or taking a school-wide field trip on land. This (or, conversely, a picture of a beaming guillotine mob) would help explain the smiling faces gathered below.

Being gathered around the flickering firelight makes us want to tell stories, so we let the children know how we got here, whisper about Prometheus hanging chained to the cliff. This was long ago, we tell them, long before someone’s glasses made any anthill a possible recess inferno, before Boy Scouts carried flint in their pockets. The woodsmoke is a comfort; we feel somehow entitled to the liver daily offered to vultures overhead.

He wears an entitled grin, with a satisfied conqueror’s stance, forgetting for a moment the terror of finding himself in over his head, his round calves wiggling impotently, the pathetic gaps between his toes. There’s something eerie about the way his upturned lips mirror the row of grimacing gills, considering how, underwater, it would be gills smiling and his lips contorted.

Underwater seeing is closer to blindness than she would ever like to be, but if she starts young enough she’ll learn what fuzzier edges have to offer, her toes webbing together in the haze. You can never be so much a mermaid with your eyes open in plain air. You can never really plunge downward.

There’s the downward motion of chainsmokers, too, those graying yogis putting time aside to breathe (at the cost of stairwell wheezing, the rattlesnake ascent.) The drop of the hand, flick-flick, while a blue plume rises: either smokestack spewed or puffed out like lazy haloes quick dissolving. (Haloes, or, at another angle, the blade about to drop. There is downward motion in a taut rope, in an object’s love of solid ground, the lopped-off head dropped in a basket, the backward-tossed bouquet, the graduation caps chucked up to the future or past, which inevitably land at our feet to take root or rot.) There is downward motion in simply hanging there.

Questions remained for me, like how to paint a portrait of a face I couldn’t remember, whose absence had so floored my mother. He was cremated; most creatures move on to a new element when they finish with living—air-breathers rotting into the soil, fish hanging in the air by the side of the road. Fire, though, will consume most anything.

What portrait, the children wonder, do fire-creatures paint of their dead?

Laura Brown-Lavoie is a student in the literary arts program at Brown University. She usually hangs somewhere between poetry and paragraphs. Her sister Tess Brown-Lavoie is a photographer and an inspiration. “Fish Hanging” was originally published in Issues.

Tess Brown-Lavoie took this photograph in Florida while visiting grandparents not her own. She lives in Brooklyn, New York.