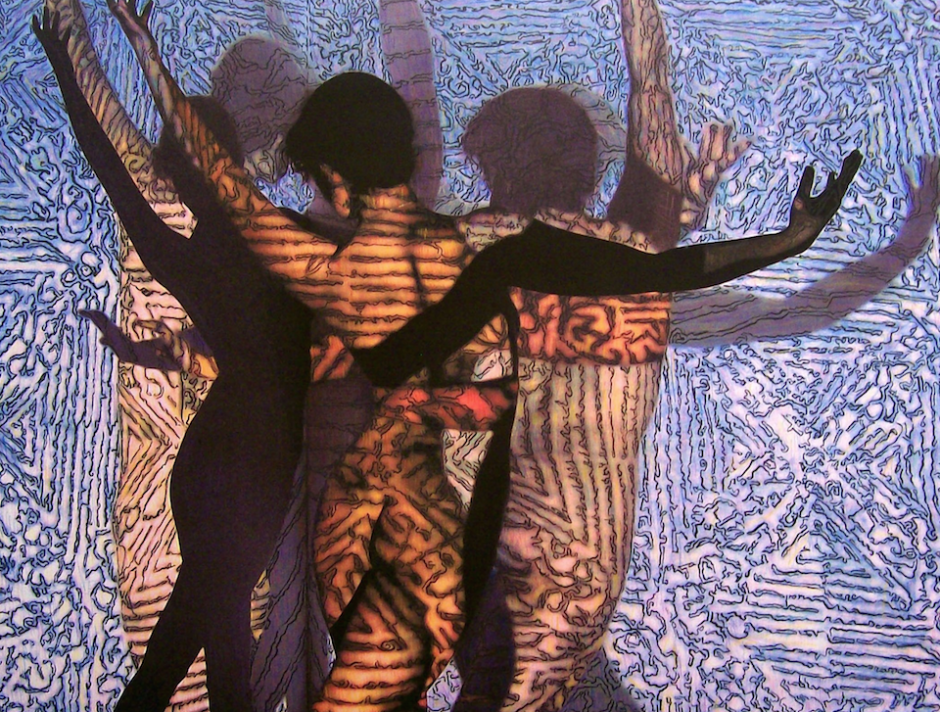 My mother wakes me in the night.

“What? It’s late here.” I try not to sound mean, but I can tell I do. I will apologize later.

My mother’s voice is tinny and garbled and distant. She tells me that my brother has tried to kill himself. I note that she says “your brother” and not “David” or “Dave” or “Davie,” as though he is a stranger that only I am related to. I want to ask how he did it,Are you sure he’s not just pulling your leg, but my mother sounds unfathomably weary and angry and I really don’t want to talk to her anymore.  “Is he okay?”

I can hear my father’s voice in the background. It is loud, urgent. My father is usually sweet and funny and soft-spoken. I don’t like his disembodied voice so I hold the phone away from my ear. “I have to go,” my mother says. “We’ll call you later.”

The phone call has woken up my roommate, but I am too agitated to feel guilty, even though it’s a Sunday night and I know that she has an early class tomorrow. I turn on all the lights and pace around the room. Post-phone call, everything has been thrown into sharp relief: the cracked spines of my books, the dust bunnies gathering in clumps underneath my desk, the fact that the Decemberists poster above my bed is decidedly lopsided.

My roommate is a former camp counselor. She throws off her covers and grabs my shoulders and tells me to breathe.

It turns out it is possible to forget to breathe.

My brother and I are curled up in laundry baskets, pretending to be puppies. I can tell that David is starting to outgrow his basket; its plastic sides are stretched and discolored. He has taken my favorite blanket to line his dog bed. I was generous and let him have it, but now I can see that his nose is dripping and that the snot is getting on the blanket that I sleep with.

“Give it back to me,” I order, and try to tug it out from underneath him, but David howls and my mother comes running to chastise us.

My mother tells me sometimes, when I’ll listen, that my brother and I didn’t always get into fights.

My mother says to me: “You don’t remember this because you were too little when it happened. When David was born, you crawled into bed with us. Think about it, the three of us together in that narrow hospital bed.”

I cover my ears and dance around and say: “La la la! If I don’t remember it, it must not really have happened!”

Itell my boyfriend about David and he looks shocked and slightly embarrassed, which in turn makes me feel embarrassed for bringing up the topic. We have only just started dating. I don’t want to be that crazy girl with the suicidal brother that he tells all of his friends about after he dumps me. The crazy is leaking out of my ears and mouth and eyes and I know he can see it.

He hugs me and says: “I’ll distract you. We can smoke some weed. Maybe watch a movie or something.”

All I want to do is kiss him and kiss him and kiss him until my lips are raw, and not speak and hardly breathe. He won’t kiss me for more than a minute or two. I tell myself it’s a normal reaction. But I want the sex because it will make me feel alive; it will push away all the death until I can’t sense it jabbing at my skin and trying to get inside me, and maybe it will convince me for a few gasping seconds that no one could ever die.

A week after it happened, my boyfriend still won’t sleep with me. It’s midterms and he is too busy, he says, too tired. Later, maybe tomorrow. And every time it’s a struggle and I cry out of sheer frustration, and he points at my tears and tells me: “See? I can tell you’re too upset for intimacy.”

So finally, I say: “If you hadn’t led such a charmed life, you would understand what I am feeling right now.”

He storms out of my room and tries to slam the door behind him, but it’s one of those doors that swings shut painfully slowly, so the effect is rather more comical than dramatic. Later, I bring my boyfriend a slice of cheesecake as a peace offering. I am afraid he will never forgive me for what I said to him, especially because I know that it is true and that I was right.

My brother and I grow up in a little white house between a field of banana trees whose fruit never ripens and a wide expanse of guarias moradas, vividly purple orchids that bloom only in April.

My next-door neighbors have a daughter, a pleasantly round-faced girl named Karla. She often babysits my brother and me when our parents need to shut themselves in their office and finally get some work done. I am always jealous when she comes to play with us because David is the one she coos and fusses over, the blond one with the dimpled limbs and the shadows of freckles on his wide-open face. I am the black-eyed one, the dirty, tantrum-prone muchacha terrible with unruly, ever-uncombed hair. A devil-child. When I misbehave, Karla pinches me. My hands are forever dotted with little red spots. Out of sheer childish malice, I pinch David when she isn’t looking. His face scrunches up and he wails pathetically, and though I always feel guilty afterwards, I can never bring myself to stop.

For weeks after it happens, I don’t take painkillers. I am on migraine medication, and when I quit cold turkey the headaches come back with a vengeance.

Some pills I do have to take, like my birth control, but I hide them in drawers and pretend they don’t exist until I actually have to swallow them.

My father is the one who calls me to explain that David took a whole bottle of painkillers. My father says: “He must have gone to a pharmacy and bought them with his own money.”

“Well,” my father replies, “we took all the pills out of the medicine cabinet after he started saying that he was going to kill himself.”

And now the secrets spill out, one by one. Things my parents kept from me. Things I never guessed. Things I cannot see because I am not at home with my mother and my father and my brother. For instance, that there is a broken pane in the glass door between the kitchen and dining room from where David threw a plate in a fit of rage and despair. That the skid marks on the linoleum on the first floor are from when he hurled a chair down the stairs. That David has started wearing only long-sleeved shirts. I tell my father that it gets cold in San Francisco sometimes, that sometimes you needto wear long sleeves, and I can feel him shaking his head all the way on the other side of the country.

I don’t take painkillers anymore because I can’t stand to think about my brother coolly walking into Walgreen’s and carefully selecting that bottle of aspirin (the generic kind, because it’s cheaper), and then paying for it, knowing that he was paying for the thing he was going to use to off himself. So the headaches become a part of my day-to-day life. They become like the bells of University Hall: like clockwork and always in the background.

Itry to pinpoint the moment my brother became sad. It’s difficult. I remember him being tremendously anxious over school when he was fourteen, but I also remember him gleefully getting high with his friends and ordering pizza when he was sixteen. Mostly I remember moments of anger, flashes of utter, despairing rage against the world. They popped out of him unpredictably. The anger and the sadness came around to visit every so often to keep us on our toes, to show us that they were always there, just beneath the surface, even in the moments when David was genuinely happy. And so it took a year or two before my parents began to realize that something was seriously wrong.

In those moments he often scared me. David, all six feet of him, powerful in his despondent fury, wailing his grief.  I didn’t like him when he was like that. I hated him sometimes, and he hated me, and we screamed terrible things at each other. I was afraid that I would snap one day, that I would get the urge to do something irreversible, like push him out of a second-story window, and the thought sent me into waves of panic and lightheadedness.

My brother has the face and body of a man, but nature has been cruel to him. He is far from having grown into himself.

“Remember, watch what you say,” my mother instructs me over the phone, “He’s profoundly depressed. Anything could set him off.”

“I know how to talk to my own brother,” I snap.

She begins to respond with something equally nasty but thinks better of it. I hear her hand my brother the phone, I hear his breathing.

I realize immediately that this is a stupid, stupid question, and I hate myself for it. David doesn’t respond at once. “Yeah, I guess,” he says finally.

I find that words are not coming to me. I tell him not to do it again. Then I tell him I love him. A moment of awkward silence, he says “Well, bye,” and hangs up.

Iam sitting in the Sundance Kabuki Theater watching a film that my brother has directed and that has been accepted into the San Francisco Film Festival, youth category. It is called Portrait, and it is about a depressed teenaged girl named Margot. David wrote it, shot it at home and in his high school, and edited it himself.

I am sitting next to my brother; he is tall and solid beside me; when I take his hand he doesn’t pull away.

The handheld camera circles Margot’s head. She is played by an ethereal, black-haired girl. She is smiling a little. My brother narrates: “In the future, Margot will attempt suicide twice, the first time only as a consideration on the roof of her school, leaping like a feral cat onto the wire blocking her from her death, falling to the asphalt below. The second time, she will take large amounts of Viagra, possibly out of curiosity or as a possible means of death. She will go into a deep sleep and wake up the next morning in awe, leaving the experience behind her for the rest of her life.”

Antonia Angress is a senior studying comparative literature and literary arts. She grew up in San José, Costa Rica, and now splits her time between Providence, Rhode Island, and San Francisco. She is currently completing Brown’s honors program in creative writing. Her thesis, a novel, is set partially in her home country. “Brother” first appeared in Clerestory, the literary and arts journal of Brown and RISD.

Anastasia Keck uses projections, printmaking, and performance to explore identity and body politics. Her process employs constant manipulation, recreation, and invention to at once hide and expose the uncomfortable. Untitledfirst appeared in Hampshire’s The Reader.